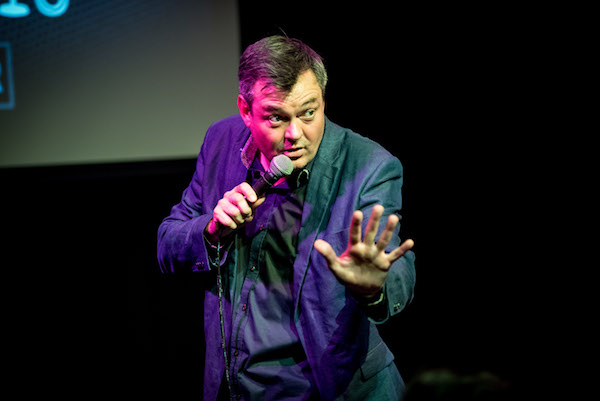 With a professionally crafted mix of funny, awkward and embarrassing stories, outrageous radio clips, video, offensive reactions on social media and his own cult songs, Grant Stott lifts the lid on his 27 year journey in radio, TV and panto; from the moment he left Lothian and Borders Police, pounding the beat as PC Stott 35G, to treading the boards as a King’s Theatre Panto baddie! Grant employs his natural charisma and sharp comic timing to expertly bring to life highlights of his working life spanning three decades; that includes falling foul of his bosses for moonlighting while in the force, challenging phone-ins live on air, inappropriate song choices, from him and other DJ’s, unedited news bulletins, TV shows that he’s successfully killed off, dealing with Ofcom regulations and, of course, what it’s actually like to scare children at Christmas.

What was “Daft Davie” trying to say to his Mum on the radio?  How did a well-known Rangers player’s name lead to Grant saying the worst possible swear word on the radio one Saturday morning?  And how did THAT song about Fife that has become an internet sensation (over 200,000 views on YouTube don’t you know) actually come about?  All will be revealed in Grant Stott’s new 12-inch version of Tales Behind The Mic.

Grant Stott, one of Radio Forth’s longest serving DJ’s ever, has stepped down from his hugely popular daytime radio show to take Tales From Behind The Mic on the road.  Directed by long-time collaborators Andy Gray and Ryan Dewar and produced by The Gilded Balloon, the newly extended and re-structured production will tour to 12 venues across Scotland until Sunday 7 May 2017.

Following his appearances with legendary Scottish comedy actor Andy Gray in the sold out, Fringe First Winning “Kiss Me Honey, Honey!” in 2013 and the critically acclaimed “Willie And Sebastian” in 2015; Grant Stott stepped out all on his own at the Edinburgh Fringe in August 2016 with his first ever one man show “Tales From Behind The Mic”.

We met up with Grant to find out about the show :

Grant Stott talks to us about his one man show from Phyllis Stephen on Vimeo.