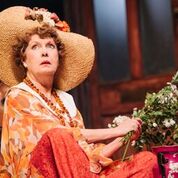 Beguiling in form with its frightfully chiselled diction and sweet-tooth tempting designs on our desired to enjoy seeing silly, giddy things become the victims of their own caprice, Director, Dominic Hill’s Hay Fever revival, certainly pushes all the right buttons.

Things begin to get very wild in the country when each of the Bohemian family Bliss invites a guest for the weekend.

A less disparate bunch imaginable become most credibly united by one constant – their desperation to escape this madhouse ‘old nook in Cookham.’ This Hay Fever is contagious.

It will spread its way across the Central Belt to co-producers, Glasgow’s Citizens Theatre in April. Rash peccadilloes come perilously close to being consummated. Judith (Susan Wooldridge) ‘resting’ diva actress queen, is confused mother to the beautiful Sorel (Rosemary Boyle).

Sorel is angst-wrought about the family being ‘abnormal.’ Foppish brother, Simon (Charlie Archer) just cannot see it. His moon-calf eyes focused only on his guest – vamp femme-fatale, heart assassin Myra – for now at least.

Ingénue Sorel so wants to improve herself she invites the older, patrician Richard to stay. Perhaps his career in the Diplomatic Service will rub off on her? Has diva Judith acquired an amore d’pugelistique in the form of the nice but dim Sandy? What can possibly go wrong? Amidst this brittle, banter of bitter/sweet twee comedic affectations we ever sense that Noël Coward is chortling with wry detachment. ‘None of us mean anything,’ pleads Sorel to an exasperated guest.

A play of its time enjoyed within its bubble of captured innocence. The stiletto quip lethal parrying between frustrated opus-drivelist, novelist David Bliss (Benny Baxter-Young) and Pauline Knowles’ Myra is a delight.

As is the wholly unexpected scene-transition front-of-curtain song medley from the ever burdened house-keeper, cook and dour moralist, Clara (Myra McFadyen). All so frightfully good fun – …where ignorance is bliss, ‘Tis folly to be wise.’ Pip Pip.

One really ought to see this charming play. Crafted Rom-Com/Ham-Dram farce at its finest – a meringue of exquisite, triumphant form over substance. Now just slip out of those wet clothes and in to this dry Martini – olive darling? 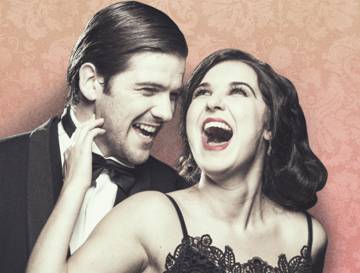