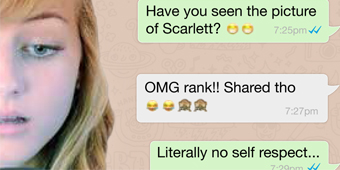 Does it imply that girls are submissive pleasure seekers, that they are asking for it?

Cast member Abigail Sinclair, (16) said : “The reason I wanted to be a part of this project was so I could partake in such an energetic piece of theatre while showing activism through performance. Girls Like That is so relevant to young people like myself, as it manages to express the gender inequality in our media which we are constantly immersed in.”

The production, by Evan Placey, will be performed by 20 young women in The Lyceum’s youth theatre.

Girls Like That will be presented as a double bill with brand new short plays written by the Traverse Young Writers group. These response pieces will focus on the theme of ‘gender trouble’, and will be performed by all-male companies. The Lyceum Youth Theatre (LYT) and the Traverse Young Writers (TYW) group are excited to present a double bill of incredible new work at the Traverse Theatre from the 9 to 11 March.

The Lyceum Youth Theatre is returning to the Traverse Theatre with a production of Girls Like That, written by Writers Guild Award winner Evan Placey and directed by LYT Producer, Rachael Esdale. Girls Like That candidly explores gender inequality in the digital minefield of young people’s online lives.

The play, powerfully performed by a cast of twenty young women, follows the personal and public turmoil faced by teenage Scarlett when a naked photo of her is leaked online, compared with the experiences of a male peer in the same situation. Director and LYT Producer Rachael Esdale says: “Girls Like That is an exciting text for our Lyceum Youth Theatre members to explore as part of this production. It challenges the performers to consider what their social norms are around gender and relationships, and question if those norms need to change. The talent and focus the young people have given this pertinent production has highlighted the importance of producing work which speaks to our participants on such a personal level.” The Traverse Young Writers have responded to an open call to create short plays exploring contemporary issues of gender, to be performed by an entirely male cast of LYT performers. These will be directed by emerging artists Corrie McKendrick and Jo Sharp. This collaboration celebrates the wealth of young creative talent supported year round by the Lyceum and Traverse Theatres. 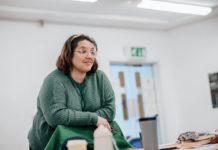 Edinburgh Festival Fringe – Outside on the Street