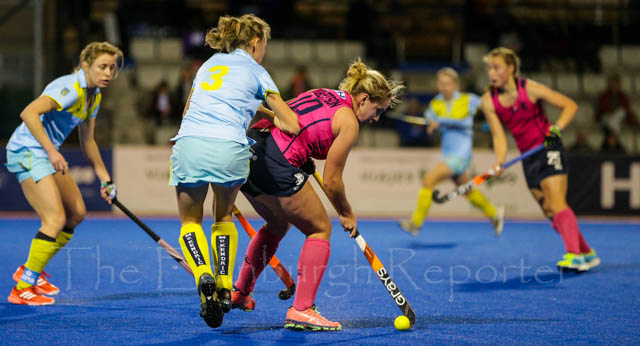 It was 1-1 up until the final seconds of last nights match between Scotland and Ukraine in Valencia. Then a controversial penalty corner award just as the final hooter sounded proved to be a heart breaker for the, mostly, young Scots team.

Ukraine had previously played out a fairly average match with Poland, before losing in a shoot-out to Ghana so hopes were high, but, once again, Gordon Shepherd’s preparation was meticulous.

Scotland exerted early pressure on the opposition, but they defended well, but couldn’t work the ball clear.

The first chance for Scotland came just less than five minutes in when Millie Brown made a diving attempt inside the area but failed to connect cleanly with the ball.

However, a couple of minutes later, a penalty corner award gave the Scots their first real chance at goal. Using one of many practised set-ups, the ball found Sarah Robertson wide of the left hand post and the GB bound Robertson found the net. 1-0 to Scotland with 7 minutes played.

Another couple of shots on target from Heather Howie and Kate Holmes, following long, solo runs were both saved by the opposition, but Scotland were certainly in the driving seat during the first half.

Another three good chances went begging in the second half as the Scots penetrated the Ukraine defence, getting in to the area, but were unable to get their on-target strikes in-target.

Around the 30 minute mark, Scotland’s Jennifer Eadie had a shot cleared off the line and the subsequent call for feet went unheeded by the Umpire.

Then Ukraine scored to level the tally. A long clearance found Oksana Ponomarenko who rounded the Scots defender, leaving her with a on-on-one with Nikki Cochrane in the Scottish goal. She came out to narrow the angle, but Ponomarenko slid the ball under the diving Cochrane and it was 1-1.

Scotland continued to pile on the pressure with another couple of narrow misses, but, as the match entered the final few minutes, Ukraine looked to have settled for the draw – a result which favoured both teams – as the two players at the back batted the ball between themselves to run the clock down.

Then the ball was launched into the Scots’ half where Nikki Lloyd proceeded to do her part run the clock down in the corner. Then it all went wrong – in so many ways. The ball was wrestled clear and in the ensuing melee, it hit a Scottish foot outside the ‘D’. Free to Ukraine? No. The umpire at that end awarded a penalty corner for a deliberate foot inside the 25 just as the hooter went for time.

Ukraine could now play 10 on 5 with the overtime PC. Cochrane saved the initial shot but the deflected ball bounced straight to Yana Vorushylo, who stuck it away to give Ukraine an entirely unexpected win.

Later the officials both on and off the pitch admitted that an error had been made with the PC award, but the result would still have to stand.

With that being the final match in the group stages, Scotland now play Russia in the quarter-finals, with Spain, who play Ghana and should win, waiting in the wings to meet Scotland in the semi-finals.