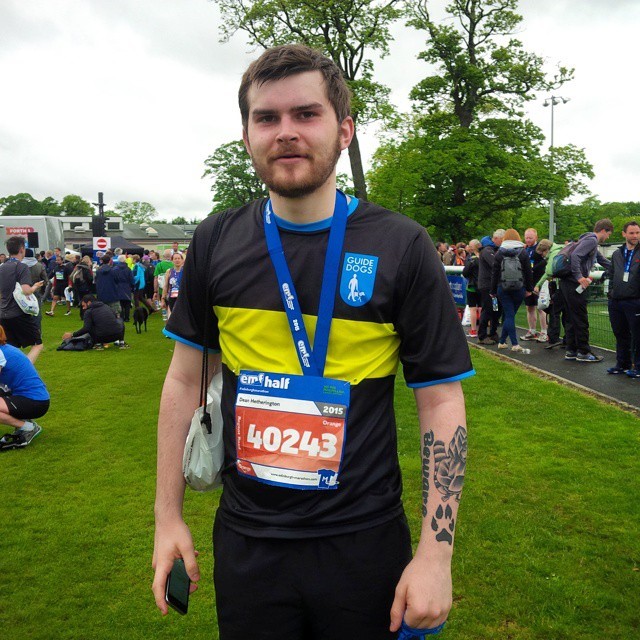 An Edinburgh man is preparing to take on the London Marathon to thank the charity Guide Dogs for giving his deaf blind father “his life back”.

Programmer Dean Hetherington, 24, decided to enter the race to raise money for Guide Dogs Scotland after watching his dad Colin Hetherington regain his independence when he was matched with Labrador Jason in 2014.

Dean said: “I’ve set myself the huge, scary task of running the London Marathon. It’s something I’ve always wanted to do, but more importantly it gives me an opportunity to give something back to Guide Dogs Scotland for all they’ve done to support my dad.

“My dad has Usher Syndrome, which causes progressive sight and hearing loss, and over the years I watched him become much less independent.

“As I was growing up, I noticed that he needed to hold on to other people’s arms for guidance, that he couldn’t see as well in the dark, that he couldn’t do everything that he wanted to do. His eyesight was slowly taking his life away from him.

“Then Guide Dogs Scotland matched my dad with Jason, the most lovable lump of a dog I’ve ever met. He’s super clever and diligent but he’s also full of character. He’s super serious and ready for business when he’s in harness and ‘on duty’ but he’s a big goof when he’s let loose.

“Every time I contact my dad he’s in a different part of the country with Jason. Having a guide dog has allowed him to meet people with similar conditions, help those in need and travel independently. Jason has given my dad his life back and for that I can’t thank Guide Dogs enough.”

You can support Dean’s London Marathon effort via his fundraising page:

Image 1: Dean Hetherington after completing the Edinburgh half marathon