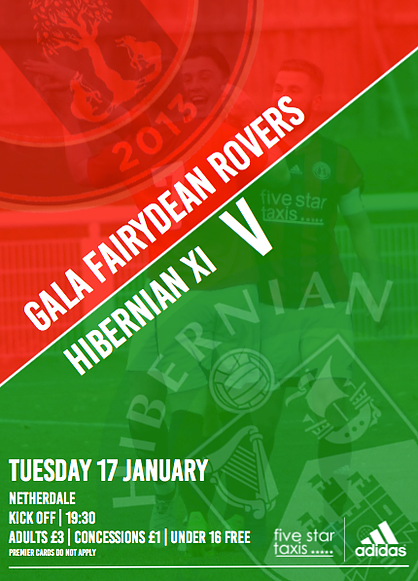 Hibs are sending a strong development team to play Lowland League side Gala Fairydean Rovers in a friendly at the 3G Arena, Netherdale tomorrow evening.

The game is set to kick off at 7.30pm with reduced prices in operation.

During the pre-season the two teams clashed in a friendly with Gala emerging victorious by two goals to nil.

Eddie May, the Hibs Academy Coaching manager has promised to send a strong side made up predominantly of the club’s development squad players but augmented by one or to first team regulars as the Easter Road side try and get players back to fitness.

Fairydean Rovers boss Steven Noble told the Border Telegraph: “We are delighted to get a second opportunity to play Hibs this season. Their development squad is one of the best in the country whilst their first team are clear favourites to win the Championship this season.

“Eddie May has promised to send a strong side with first team players such as Danny Handling getting a chance to aid their recovery and battle for a place in Neil Lennon’s starting team.”

Adults will only be asked to pay £3 for entry with concessions £1 and accompanied children free.