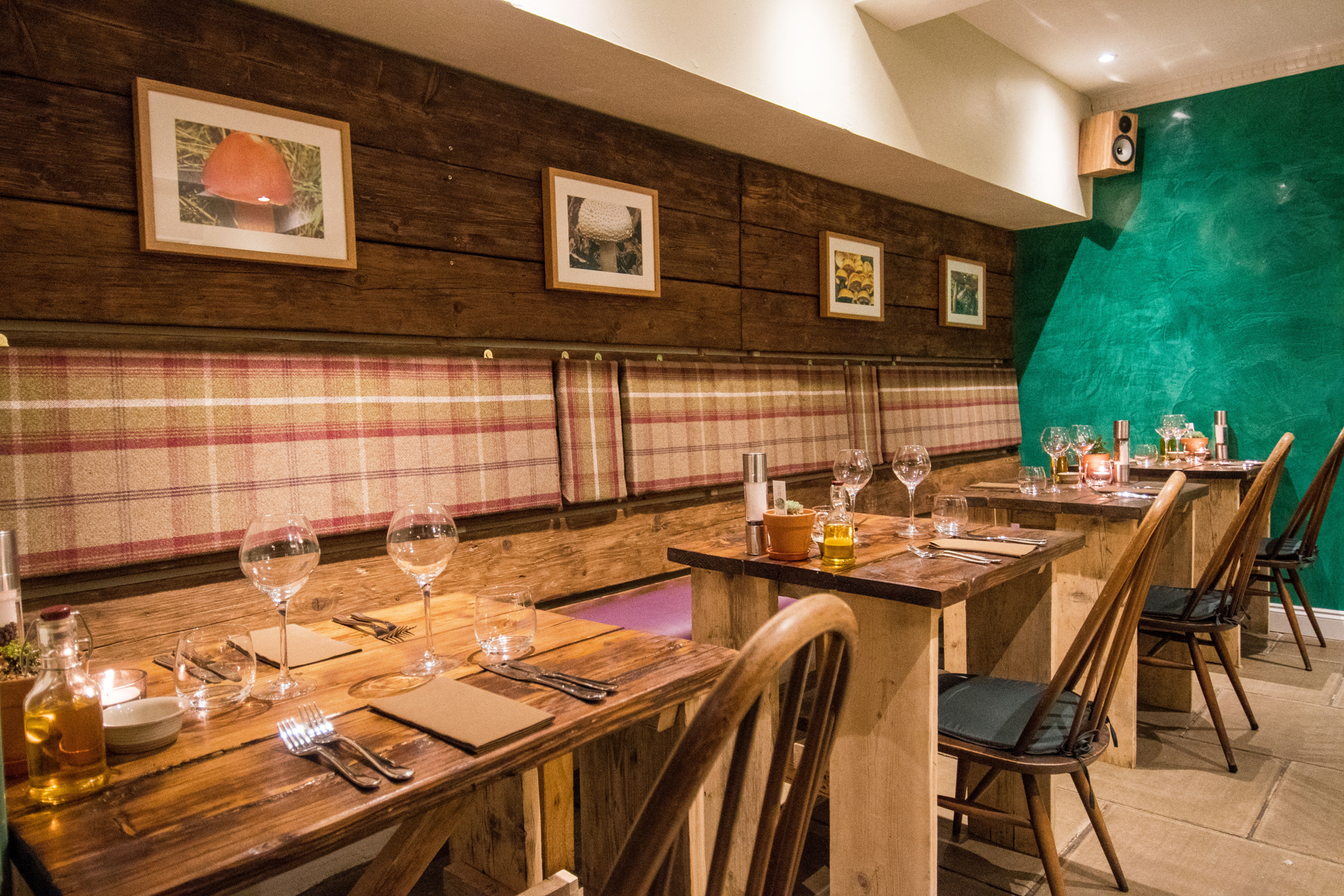 Forage and Chatter is the new kid on the block in Alva Street – but owner and manager Cameron McNeil is very clear in what he is doing, and he has the experience to back it up.

He told The Edinburgh Reporter that his restaurant serves the best (very) locally sourced and foraged produce. All of the food comes from within a 25-mile radius, and the concept involves brilliant local produce done well.

One sommelier, two front of house staff and three chefs all help to make this restaurant tick. Cameron explained: “The chefs have trained with Tom Kitchin and at Prestonfield Hotel and then they all worked together at The Balmoral, so they are a very strong unit under Head Chef Nick, and there is a lot of camaraderie among them. There’s a good vibe in the kitchen when they’re cooking!”

Meals include foraged items on every plate that go out from the kitchen. Everything is Scottish in this restaurant, and every member of staff can tell you exactly what is on your dish and where it came from.

The restaurant gets its plants such as rosemary and mint from the Secret Herb House Garden. Their main focus is on bringing the best of Scottish produce to your plate at affordable prices.

And we discovered that foraging is about so much more than just mushrooms! Cameron explained : “Whether you are foraging by the sea for seaweed or you’re looking for one of the many different varieties of Scottish mushrooms, there are a lot of different items to pick. Even within the city centre there are local berries that can be used.”

But the foraging is not conducted by McNeil himself. Instead it is the job of a professional forager who has a proper commercial license.

The menu offers lots of choice for the occasional vegetarian (like me) or the committed meat eater.

Lunches are currently on offer at £14.95 for two courses and £17.95 for a three course meal with a Christmas menu coming soon. McNeil continued : “At lunchtimes whether the protein is fish or meat it is designed to be what I call clean and of course local. It will make you feel good when you go back to work, or perhaps spend the rest of the afternoon at leisure. The dinner menu is a wee bit heavier. We have two vegetarian options at each stage as well as two options for meat or fish lovers.

“My favourite food is simple and well-cooked. I like a pork chop cooked to perfection or a filet of fish cooked really well. I don’t really like too much butter or dairy. I just like clean, properly cooked food.”

The restaurant has been open for a matter of weeks and already the reviews have been glowing.  On Open Table his food is called ‘excellent’ and ‘top quality’, and the experience is described as ‘wonderful’. This is exactly what McNeil wants to hear now that he has his own place, destined to be the first of many if the ambitious restaurateur has his way.

This restaurant is in the basement in Alva Street, the lighting has been worked on to improve daylighting, and it has a conservatory at the back, perfect for private gatherings.

The interior decoration has been much changed with the rear wall of the conservatory taken back to the stone, while the feature wall in one of the several seating areas is a particular plaster from Rome called Stucco Veneziano. The vibrant green shade changes everything while a variety of little plants in individual pots decorate the tables and appear on shelves, reflecting the idea that the food comes from foraging.

The tweed-covered seating probably gives you the clue to McNeil’s own roots, some of which lie in the Highlands, but the copper-topped bar at the front of the restaurant says that this bar is very much mapped as a destination for drinks and cocktails.

Perfect for lunch, drinks and dinner this is a good space for a party or large groups with its conservatory.

McNeil explained his own history which makes him the ideal person to open this kind of restaurant. He is a perfectionist and this has developed from a career in different establishments where that is the key ingredient.

He worked at the award-winning and very hip Lime Wood where Angela Hartnett was in charge of the kitchen and his mentor was Robin Hutson for four and a half years.

Hutson went on to start the Hotel du Vin chain which was then sold on to Malmaison. Alongside Hutson, Cameron oversaw five hotel openings in many different positions from reception duties  to manager. Hutson opened a chain of hotels called The Pig along with the billionaire owner of Ineos, Jim Ratcliffe and was a good mentor to have.

McNeil explained: “Wherever there was a weak team and a weak hotel I got moved around. I like problem-solving and it was nice to walk into hotels and figure out the problem in a specific department and deal with them. then I got to move on to another hotel which is nice when you are in lovely areas such as those in the south of England.”

And although he has just started, there are many plans running around in his head for the future of Forage and Chatter.

“The wine list is made up of bottles of wines with a story. It is all about where they come from. They are not all organic or bio-dynamic but what they do is offer a good story at an affordable price.

“The other thing that I am working on here is that we have very attentive staff. I want my staff to connect to the customers and know about them. We don’t just serve them and then walk away. We get involved with our customers. If you have a gin and tonic for example we will know what kind of gin you had last time. These wee bits that add to attentive service.”

Originally born in Edinburgh, he has lived in Africa, Germany (he is a fluent German speaker) went to school in the Highlands and went to study in Leeds with a spell in the New Forest after that until earlier this year.

He is happy to be in Edinburgh though! He concluded: “This is just such a lovely city you realise when you come back that this is such a beautiful city. And it is now home. I thought if I wanted to start a new venture then I might as well start it somewhere nice!”