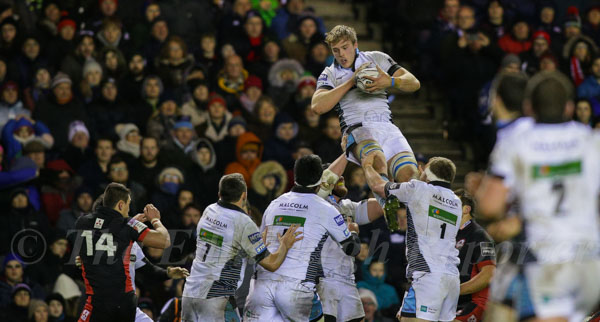 21,036 supporters turned out at BT Murrayfield to watch what, should have been, one of the showcase matches of the season. Instead they were ‘treated’ to a fairly average, error- and penalty-strewn affair which did neither side any favours.

Glasgow, for their part, stepped up to the plate and scored three tries to Edinburgh’s four penalties and only a temporary glitch in Finn Russell’s kicking prevented the gap being even greater.

The writing was on the wall from the first minute as an innocuous clearing kick from Glasgow centre, Alex Dunbar was chased though by wing, Junior Bulamakou into the Edinburgh 22. Edinburgh’s cover easily lead the chase to the ball, but as the player went down to collect, the ball squirted clear and Bulamakou won the chase to touch down. Russell missed the first of his evening’s kicks, so it was 5-0 to Glasgow after less than a minute.

Edinburgh were then able to put some pressure on the Glasgow defence, but made heavy weather of gaining ground. However, a fine break from Hamish Watson eventually lead to the first chance of points for Edinburgh’s Duncan Weir. The stand-off duly obliged and, eight minutes in, it was 5-3.

The next quarter of an hour was fairly forgettable as the match lurched from set piece to set piece with a few penalties thrown in for good measure.

The next points opportunity came for Edinburgh via a break down penalty which saw Glasgow’s loose-head, Alex Allan, binned following a team warning to captain – and Man-of-the-Match – Jonny Gray, for persistent infringements. Weir duly obliged and, as the game entered the second quarter, it was 6-5 to the hosts.

As the match meandered towards half time, Edinburgh were beginning to dominate the scrum and used the ball to gain territory, but couldn’t make anything of their advantage. With less than ten minutes of the half left, Glasgow won a penalty which Russell kicked to give them a lineout near the five metre zone. Ball won, the driving maul set up heaved the Edinburgh pack over their line and lock, Josh Strauss fell over for the try. Russell slotted home the conversion and it was 12-5 to the visitors with just under five minutes left to the break.

Glasgow used the time well and as the clock ticked over, another penalty – successfully kicked by Russell – meant the half time score was 15-6 to Glasgow.

The first ten minutes of the second half were, probably, ‘won’ by Edinburgh – although Russell missed an ‘easy’ penalty for Glasgow – and reward came in the shape of another, successful, Weir penalty to narrow the gap to 15-9.

As predictably as sunrise, a penalty was given away shortly after the restart by Edinburgh, more or less, in front of the posts for Russell to open the gap again. However he needed a bit of quick thinking as the ball fell off the tee as his allotted time was nearly over, forcing him to take the pragmatic approach, and score with a drop goal to open the gap again, on the hour mark, to 18-9.

Five minutes later, it was another Glasgow try. The visitors spent the time up to their try in Edinburgh’s 22, retaining the ball and moving the defence about until, with play building on the right, the ball was fired through the hands across to the left, outrunning the defensive line and leaving centre, Alex Dunbar, with a gentle trot in to score. Russell then converted to make the score 25-9 to the West of Scotland side. A raft of changes from both sides then saw the match swing Edinburgh’s way for a time and as full time approached, a break from deep inside his own half by Sean Kennedy, then Damien Hoyland, brought play into the Glasgow 22 where, another sub, Viliame Mata picked up and battered his way over between the sticks. However, the Glasgow defenders were on their game, managing to prevent the huge Fijian from grounding the ball and, that was that, game over.

So the first leg of the 1872 Cup went to Glasgow with a score line of 25-12 and, with the traditional New Year’s Day return fixture now scheduled – thanks to the PRO12 board – for the 6th May, some drama has been taken away from the head-to-head. Given the quality of Monday’s match, that might not be such a bad thing……..

Images from the match might appear here over the next few days.