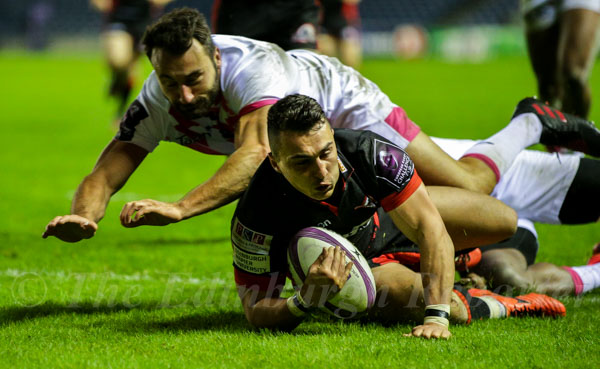 Round Three of the European Rugby Challenge Cup saw French Giants Stade Francais head to Scotland’s capital to determine which of the two would remain unbeaten after 80 minutes. Despite losing Phil Burleigh – playing in his 50th match for Edinburgh – to a red card, the home side came from behind after the first half to snatch the points late in the second.

It took Stade less than three minutes to open the scoring with the first try of the match. Winning an early penalty – as in 20 seconds in early – The visitors pressed Edinburgh back against their try line, with scrum half, Will Genia marshalling the play and, with three minutes up, marshalling centre, Waisea Vuidravuwala, across the line for the five pointer. 10, Morne Steyn, then chipped the ball between the sticks for the conversion and 7-0.

A few minutes later, a clearing kick from stand off, Duncan Weir, found Edinburgh offside and Steyn, successfully, scored with his kick just inside the Edinburgh half for 10-0.

The following period of play was fairly evenly balanced, but Stade managed to repel Edinburgh’s attacks without much effort as their pack proved to be much the stronger and were heaving their opponents all over the place. Any ball that Edinburgh got back ended up with Weir hoofing it into the air too far up the pitch for his players to make much of a chase.

22 minutes in, Stade scored their second try of the match. Receiving ball from Genia off the back of a scrum against the head, wing, Josaia Raisuque, cut inside and sliced through the Edinburgh line into the 22. A couple of recycles later and, aided by some feeble Edinburgh tackling, flanker, Sekou Makalou romped in from 10 metres out for the try. Steyn then added the extras and it was 17-0 for the visitors and they looked to be well on top.

It took until the 38th minute for the hosts to get their first points on the score board via a Weir penalty. Having lost centre, Paul Williams, to yellow for a tip tackle Stade came under the first bit of real pressure from Edinburgh and a brace of scrum penalties for the Edinburgh side saw Weir kicking the points to open the account for the home side.

Unfortunately, Weir’s three points were wiped out within seconds as Steyn retaliated for the visitors with another long range penalty from the restart to make it a 20-3 match at the break.

It was generally agreed – amongst the few who had expressed an opinion – that, despite the scoring, the first half had been a pretty dismal affair and there was not much hope of an exciting and entertaining second. How wrong they were……

It was a ‘different’ Edinburgh side that took to the pitch in the second half and Stade found themselves with all sorts of problems on their hands. Probing runs from Damien Hoyland and Viliame Mata saw the French side pushed back and the only time they penetrated the home 22, they were turned over by Ben Toolis at the breakdown.

Success came the way of Edinburgh with seven minutes of the half played from a Hoyland try. Quick ball from a right side line out was whipped across the field into Hoyland’s hands on the left. The elusive winger then fired round the outside and, a couple of side-steps and a massive dummy later, he crashed over for the try and a 20-8 score line.

Less than five minutes later, they were over again. A kick into the corner was chased down by Hoyland and the defender put under huge pressure and a penalty won. Going for the line, Edinburgh then secured the ball and set up. Rucking across the goal line then put the pack in a position to score and Toolis duly obliged by diving over for the try. Weir followed up with the conversion and it was now, a much healthier, 20-15. Now the ‘Pape Incident’ took place. In the 55th minute of play, Pascal Pape found himself competing for the ball at a breakdown when the referee blew up for an infringement. Pape carried on, but Burleigh stepped in and when Pape didn’t release, Burleigh smacked him on the side of the head. The 6′ 5”, 19+ stone lock then went down like…. well… like a footballer, clutching his face The referee went across to the TMO to assess the incident and then red carded Burleigh for ‘striking an opponent’. As he walked off, a couple of Pape’s team mates shook his hand in obvious embarrassment at their team mate’s antics and that was that, game over… Or was it?

Now the Edinburgh that fans turn up week after week hoping to see came to the fore.

However, another Steyn penalty just before the hour got in the way for a minute or two for 23-15, but, largely, Edinburgh now had the better of the play. The pack also – aided by a raft of subs, perhaps – also got their act together and began to dominate proceeding both at set-play and breakdown times.

Reward for the 14 came in the 62nd minute following another series of rucks and mauls in the Stade ‘red zone’. The ball was fired out to, the returning, Will Helu, and the wing made a great run down the right before running into opposition. The ball was recyled across the face of the goal area once again and, as more of the defenders were pulled in, scrum half, Sam Hidalgo-Clyne spotted a gap and dived over near the posts. Weir then converted to make it a one-point match at 23-22 to Stade Francais.

A few minutes later, Edinburgh took the lead for the first time. A successful kick-chase, which forced Stade to carry, over won a five-metre scrum for the home side. They then won a penalty from the scrum and Weir slotted home for 25-22 with just under 15 minutes left to play.

There was a scare in the 73rd minute as Stade got over the line but, this time, the TMO decision was in Edinburgh’s favour and the ball was deemed ‘lost forward’. As the match entered the final few minutes there must have been few nails left unchewed as the play went one way, the the other until, with a couple of minutes left, Edinburgh were awarded a second penalty in succession from a line-out/maul combination. This time, Weir was in range. Game over? This time, along with the kick, it was and, with the score at 28-22, all the home side had to do was to hold onto the ball for 90 seconds and it was all over and 14-man Edinburgh had maintained their 100% record – albeit without a bonus point – in this year’s ERCC.