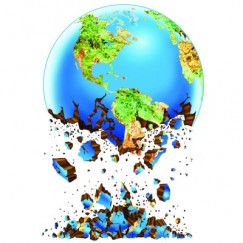 So many things have fallen apart this year. …Syria, the Islamic State, the UN, the USA, the EU, the economy, the climate, the earthquake zones of Italy, Japan, Indonesia, New Zealand, the world of sport.  It all makes me as depressed as WB Yeats was in 1919 when he wrote, in “The Second Coming,” – “Things fall apart, the centre cannot hold. Mere anarchy is loosed upon the world. The ceremony of innocence is drowned. What rough beast, it’s hour come round at last, slouches towards Bethlehem to be born ?”

In Scotland things fell apart from the very beginning of January when 100 businesses in the centre of Ballater were flooded as the River Dee burst its banks. Abergeldie Castle, which has stood proudly on the river bank since the 16th century, was very nearly washed away.  Then later in the month, it was the turn of Hawick, where the River Teviot overflowed its banks and 300 properties had to be evacuated.

It turned out to be the wettest winter since records began. And 2016 looks like being the warmest year. But this doesn’t seem to scare the climate-change deniers being appointed to the Trump administration in the USA.  It’s worth noting though, that in October this year, the world finally passed the point at which renewable energy overtook coal as the largest source of power. And Scotland still seems to be setting the trend, with over half our electricity coming from renewable sources and our last coal fired power station shutting  down its furnaces in March this year.

It’s been a bad year for the Scottish economy.  The fall in the oil price has led to the loss of some 60,000 jobs in the North Sea. Our economic growth has thus lagged behind the rest of the UK.  The latest unemployment rate stands at 5.3 per cent. And wages have certainly not kept up with inflation.

We are steeling ourselves for the negative effects of Brexit, of which Scotland disapproved, by 62 per cent in the referendum in June. We’re not expecting any increase in investment in Scotland and we fear the loss of trade and EU subsidies. Our growth rate is expected to be cut from 2 per cent a year to 1 per cent as a result.  The devaluation of the £, by around a fifth, may sound like a good thing for our exporters but if the whisky industry is anything to go by, the increase in sales is out-weighted by the decease in revenue.

The referendum campaign in Scotland managed to avoid the xenophobia and “post-truth” of what passed for a campaign in England. And apart from being the birthplace of Michael Gove and Liam Fox, we also avoided the embarrassment of the shambles in the Conservative Party in the immediate aftermath of the result.  Our first minister Nicolas Sturgeon has not been slow in pointing this out and insisting that Scotland’s voice is heard in the Brexit negotiations.

But, of course, Scotland had already been through its own mini-revolution, in a general election a few weeks before, when the Conservatives overtook Labour to be the main opposition to the SNP.  Nicola Sturgeon lost her overall majority in the Scottish Parliament but the SNP is still the largest party by far, with 63 seats to the Conservatives’ 31, Labour’s 24, the Greens’ 6 and the Liberal Democrats’ 5.

Things have certainly fallen apart this year for the Labour Party.  To find themselves sitting in the shadows at Holyrood, where the Tories used to sit, has come as a mighty shock. Jeremy Corbyn’s re-election in the summer split the party in Scotland, with its leader Kezia Dugdale backing Owen Smith and her deputy Alex Rowley backing the Corbynistas.  The party failed to make much of an impact in the European referendum and it has not been winning back its traditional supporters from the SNP.

But at least it has found a new message – a penny on income tax to “end austerity” –  and finally it has been able to put itself firmly to the left of the SNP.  The UK Chancellor’s autumn budget statement dished out more austerity medicine and Labour has accused the SNP of just passing it on, with real cuts to public services.  The Scottish finance minister Derek Mackay tried to counter this with his own budget statement but he could only find £120m extra for schools from his decision not to follow the Chancellor in increasing the tax threshold for the highest earners.

This cautious use of the Scotland’s new tax-raising powers could well cause the first puncture in the SNP bubble.  Up to now it has escaped the popular anger which is sweeping Europe and America and turning establishment politics upside down.  In fact, the SNP have been riding the angry wave but a clever surfer can only stay upright for so long.

Which brings us to sport. And here too things have been falling apart. Our national football team failed to qualify for the European championships.  Then the whole footballing world was tarnished by corruption and child abuse scandals.  In athletics, the scandal was drugs, with the scale of Russia’s state-sponsored doping programme truly shocking.  But Britain and Scotland escaped all this and did surprisingly well at the Rio Olympics, coming second in the overall medal table.  Scotland contributed 13 medals to the total, including Andy Murray’s gold in the tennis.

In fact, the Murray brothers were the bright stars of this gloomy year. Andy became world number one men’s singles player and Jamie world number one in the doubles.  A truly remarkable achievement, and all due to their brilliant mother Judy. (and not forgetting Gordon Reid who is also number one in wheelchair tennis)

One other bright spot in the year was the decision by the Scottish government to grant official protection to beavers, a native species to Scotland till they were hunted to extinction 400 years ago.  In a year in which one in ten Scottish species was at risk of extinction, this was one small step in the opposite direction.  It’s a sign that perhaps we can save and re-wild our planet, end its wars, ease its inequalities, and head towards a brighter future.

Optimists say things don’t so much fall apart as fall into place. But this year, 2016, I find that particularly hard to believe.