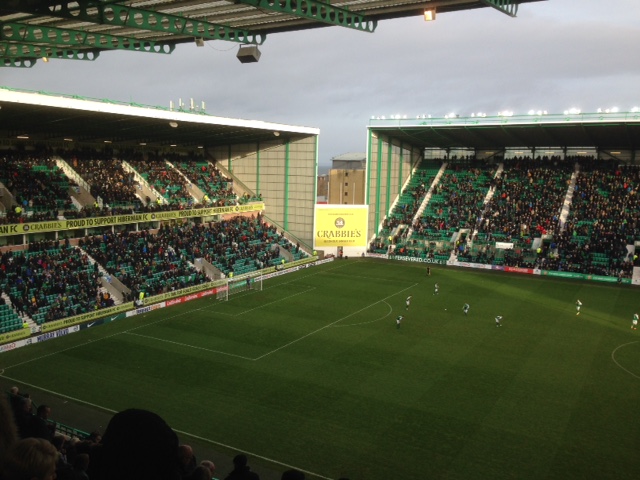 Hibs dropped to second place in the Championship for the first time since October 15 after a frustrating 1-1 draw with Raith Rovers at Easter Road this afternoon.

Neil Lennon made four changes to the starting XI that drew with Morton last weekend. In a change of formation from 3-5-2 to 4-4-2,  Liam Fontaine dropped to the bench along with Marvin Bartley, Martin Boyle and Brian Graham.

Dylan McGeouch returned after missing the Morton game with a sprained ankle and youngster Scott Martin joined him in midfield. Goal scorer Jason Cummings and Grant Holt started up front.

The game kicked off at 1pm and the floodlights were already on. Hibs should have taken the lead in the 8th minute when McGeouch slid an inch perfect ball into the path of Cummings but the youngsters effort was well saved by Kevin Cuthbert.

Cummings almost opened the scoring with a free kick from 22 yards out but his strike flew inches past the post with Cuthbert stranded.

Holt then set up Andrew Shinnie but once again Cuthbert was on hand to block the shot then the big striker produced some sublime skill on the touchline before setting up Commons but his shot flew inches wide.

Paul Hanlon picked the ball up in his own half and ran 50 yards with the ball before setting up Shinnie but Cuthbert was on hand to block the shot.

Moments later Cummings curled a low effort toward the bottom corner but Cuthbert produced a superb fingertip save to keep the scores level.

Shinnie then set up Holt but he was unable to get the ball from under his feet and the danger was cleared.

Just before the break, Skacel was lucky to escape a red card after a reckless lunge at McGeouch but referee Greg Aitken incurred the wrath of the Hibs’ fans by only producing a yellow and he was booed off at half time.

In the 46th minute, Shinnie slid the ball into the path of Lewis Stevenson and his cut back found Commons but the Raith defenders managed to block his strike.

Two  minutes later Raith took the lead against the run of play when Chris Johnston’s cross was headed into the net by Jean-Yves M’Voto sparking wild scenes from the travelling support.

Shinnie then set up Cummings who beat three players but his shot was blocked.

Hibs pressed for an equaliser but Rovers always looked dangerous on the break and Jason Thomson struck the bar with a long range effort.

Mark Stewart replaced Skacel and the former Hearts played sparked fury amongst the Hibs’ fans by giving a ‘5-1’ gesture as he was leaving the field.

Martin Boyle then replaced Cummings and the substitution soon paid dividends when he latched onto a flick by Holt and beat two defenders before firing the ball low past Cuthbert to equalise.

From then on it was all one way traffic as Hibs pressed for a winner and Keating had a late chance but his bicycle kick effort was just off target and Hibs had to settle for a share of the points.

After the game Lennon said: ” We could have won two games today with the amount of chances we had. Toward the end it was the Alamo. We had 21 attempts and scored one but we played well, especially the first half.

“We need to show a little bit more composure in front of goal and need to take our chances when we are on top.”