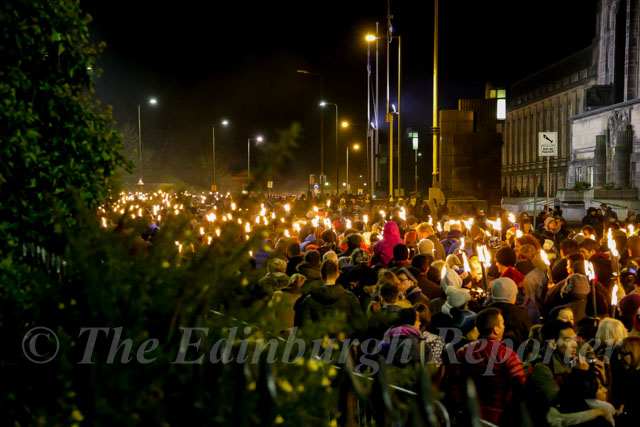 If you don’t have a ticket then don’t come to Edinburgh City centre on Hogmanay. That was the message from the organisers at this morning’s press conference.

If you have booked tickets then you are asked to make sure you collect them today or tomorrow.

Loads of events are already sold out such as The Night Afore Concert in Princes Street Gardens, the Candlelit Concert and the Old Town Ceilidh as well as events on 1 January. There are some torches left for the Torchlight Procession and a few tickets for the Street Party. The three day party begins tomorrow with the Torchlight Procession to CAlton Hill where the 10,000 torchbearers and 30 Up Helly Aa Vikings from Shetland will start things off with no fewer than four pipe bands.

The Procession leaves Edinburgh’s Old Town at 7.00pm and will be viewed by an estimated 30,000 spectators along the route.  This year, for the first time, all accompanying friends and family must purchase a £3 wristband to join the Procession.  A 50p donation from the sale of every torch and wristband will be made to the official Edinburgh’s Hogmanay charity UNICEF to help children affected by the war in Syria.  Access to the Procession and the finale viewing areas at Waterloo Place and Calton Hill are exclusively available to those with wristbands however the fireworks can be viewed from surrounding streets and vantage points across the city.  Pre-booked torches and wristbands will be available for collection from St Giles Street from 2.00pm on the day.

Countdown firework displays on the hour from 9.00pm on 31 December will culminate in the world-renowned Midnight Moment firework display lifting from Edinburgh Castle, Princes Street Gardens and Calton Hill.  This year the Midnight Moment will showcase the drama of Edinburgh’s historic cityscape to the world with the addition of a spectacular laser and light show supported by Creative Scotland through the Scottish Government’s Edinburgh Festivals Expo Fund and by the City of Edinburgh Council to launch 2017, the 70th anniversary of Edinburgh becoming a world leading Festival City.  Details of timings of all fireworks displays over the Edinburgh’s Hogmanay celebrations can be found on www.edinburghshogmanay.com.

Cllr Richard Lewis, Edinburgh’s Festival and Events Champion, said: “The countdown to Edinburgh’s Hogmanay is on and it really is set to be a cracker. With three days of spectacular events including the Torchlight Procession and the Stoats Loony Dook, plus so many stages offering fantastic entertainment at the Street Party, be quick to get your ticket to the greatest New Year celebration on earth.”

Unicef, the leading children’s organisation, is the Edinburgh’s Hogmanay official charity partner again in 2016 and partygoers will be encouraged TO support Unicef to help children whose lives have been turned upside down by the continuing conflict in Syria. At 10.00pm, in the middle of the world famous Edinburgh’s Hogmanay Street Party, a one minute Unicef blue firework display will lift from the ramparts of Edinburgh Castle.  Donations can be made to Unicef by texting BLANKET to 70060 to donate £3.

A free Hogmanay NightBus Service once again runs for revellers throughout the city supported by Diageo and the City of Edinburgh Council and provided by Lothian Buses.  The service starts at 00:20 and runs until 04:00 and will help around 20,000 people get home safely.   Edinburgh Trams are, for the first time, offering free Hogmanay Tram Services to ensure revellers can leave the city centre after the celebrations.    Free trams will run from midnight until 05:00 every 20 minutes. Details of times and routes can be found at www.edinburghshogmanay.com.

If you have not yet got yourselves organised for Hogmanay then there are still some tickets for the Ceilidh at The Queen’s Hall. Click below.