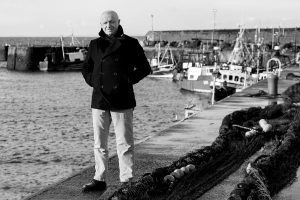 Local crime fiction writer Peter Ritchie will give a talk about his work at Penicuik Library on Thursday 24th November, (7-30 – 9.00pm) Entry free

Musselburgh born Peter is author of the popular Grace den Herder series of novels about a female detective who transferred from Northern Ireland to Edinburgh.

In these books, he draws an authentic picture of how criminals, their victims and the detectives who try to catch them think, act and feel.

Peter started his working life at 15 as a deep sea fisherman before joining the police service and moving through the ranks of CID/Murder Squad/Regional Crime Squad in Scotland. He then went on to manage the Organised Crime Unit in the National Criminal Intelligence Service in London where he ran a multi-agency team drawn from various branches of the law enforcement and the security services. This was a unique concept at the time and Peter travelled to many parts of the world in this role. He was subsequently appointed as the UK Liaison Officer to Europol in The Hague where he spent five years.

He returned to Lothian and Borders heading the Major Crime Team before taking on an advisory role for a project in Croatia. Following his retiral he worked on a number of private investigations before spending the next few years as part of the public inquiry team looking into the murder of the LVF leader Billy Wright in the Maze Prison.  He also worked on a public inquiry into the death of eighteen patients in the Vale of Leven Hospital from a hospital acquired infection.

In the shows, Peter and another retired police officer, former Deputy Chief Constable Tom Wood, “interrogate” a politician or writer and the results are really quite interesting.

The first show is available on the iPlayer now and Peter and Tom question Kenny MacAskill about his record as Justice Secretary and the decision to release Abdelbaset al-Megrahi.
The second show, featuring Lesley Riddoch, aired on 18 October and the third, featuring Ian Rankin a week later on 25 October.

Earlier this week the Edinburgh Reporter caught up with Peter who kindly took time from his hectic schedule to talk about the event and also his latest book which will be published in the coming months.

He said: ” I’m looking forward to giving a presentation on my work at Penicuik Library next week and hopefully there will be a good turn out. During the presentation I will be taking the chance to explain what motivated me to write the Grace den Herder novels, recurring themes and future stories.  I will also explain how my own experience plays into the books.

“The next one is called ‘Our Little Secrets’ which was inspired by cases I was personally involved in. I hope to explain why these cases had such a profound effect on me.

“I will also be doing some readings as well.”