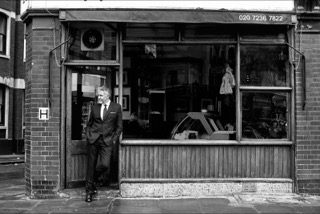 Due to overwhelming public demand after this year’s hugely successful run, the ‘80’s Invasion’ tour is back in 2017 with four iconic artists from the decade performing on the same bill.

The new line-up features Paul Young – one of the most popular solo artists from the era, legendary pop punk princess Toyah, Liverpool’s finest guitar duo China Crisis and for the first time performing in the UK in over 25 years, flying in especially from the USA the gorgeous Martika!

The tour takes in 15 dates and starts on 2nd March at Leicester’s De Montfort Hall, culminating on 19th March at Liverpool’s Philharmonic, with a performance at the Edinburgh Playhouse on 5th March.

With his stylish charm and unique vocal talent Paul Young quickly cemented a place in the nations hearts. Coming into his own with his first solo album ‘No Parlez’ in 1983, the release went triple platinum in the UK alone, and spawned the No 1 single ‘Wherever I Lay My Hat (That’s My Home)’, which maintained the top spot for most of that summer. The album also included the top 10 hit ‘Love Of The Common People’ and the No. 4 hit ‘Come Back And Stay’. With the release of his second album ‘The Secret Of Association’, which also reached No. 1, his status as a world star was confirmed with singles that included the No. 2 hit ‘Every Time You Go Away’, ‘I Wanna Tear Your Playhouse Down’ (No 9) and ‘Everything Must Change’ (No 9). One of the highlights of the 1989 ‘Nelson Mandela Tribute Concert” was Paul’s performance of the Crowded House song ‘Don’t Dream It’s All Over’. In 1991 Paul recorded a duet with his friend Zuchero ‘Sensa Una Donna’ which reached No. 4 and which along with the afore mentioned ‘Don’t Dream It’s All Over’ featured on his best of album ‘From Time To Time’. Paul also featured on the massive No 1 original Band Aid record ‘Do They Know Its Christmas’.

Earlier today, Paul took time out of his busy schedule to chat to the Edinburgh Reporter about his love of Scotland, 80s music and culture and his plans for the future.

He said: “I’m really looking forward to coming to Scotland. I was actually in Edinburgh a couple of weeks ago receiving the Forth Icon award which was a very nice surprise.

“I have performed in Scotland so many times with the Q Tips, Streetband and solo and I often think that I don’t get up there often enough.

“The 80s Invasion tour will mainly include my hits from that decade although I may include at least one new song.

“I enjoy the fact that the audiences for these shows are diverse and there is a fair mix of adults who were around at the time and younger fans who have easy access to the internet these days and can get very inquisitive.

“Also appearing on stage will be Toyah whom I know well and have performed with many times, China Crisis and Markita.

“80s music has remained popular over the years. Love her or loathe her, the Thatcher era saw a positivity about the future and for some it was an affluent time that people like to look back on. There were significant developments in music such as CDs and drum machines and there was a real diversity. Duran Duran were nothing like Culture Club who were nothing like Simply Red and of course the fashion was wild as well.

“Growing up, I lived on a pure diet of soul as well as African music and my R&B vocal style went with that.My favourite used to be “Everytime you go away” but now it changes all the time. “Senza una donna” is probably my favourite at the moment.

“Earlier this year I released by first album in almost 20 years, ‘Good Things’ which has been critically well received and after the tour I have a number of projects on the go.

“One in particular involves me as an interviewer rather than an interviewee and is called ‘Rock Tales.’ It’s great fun and involves guests mixing a cocktail and talking about life on the road. I want to put a little bit of the dirt back. So far we have had a mixture of rich and varied people such as the Charlitans, Sean Ryder and Bez, The Sex Pistols and Andy Bell.

“It’s all very light hearted. I’m not sure where it will be broadcast yet but be sure to look out for it.”

Appearing with Paul will be Toyah who  has had a highly successful and incredibly diverse career with major hit records and many prestigious stage and screen roles to her credit that have made her one of Britain’s biggest household names. She has had 15 top 40 singles, 4 gold and platinum albums, made over 10 feature films and appeared in over 30 stage plays. Her hits include ‘It’s A Mystery’ (No. 4), ‘I Want To Be Free’ (No. 8) and ‘Thunder In The Mountains’ (No. 4). In 1982 she won the Best Female Singer in the then Rock & Pop Awards (now the Brits). She also appeared in the cult classic ‘Quadrophenia’ alongside Phil Daniels and Ray Winstone, based loosely on the life of The Who. In 2003 she survived 12 long days and nights in the Australian jungle for “I’m A Celebrity … Get Me Out Of Here” and is still a prolific performer.

Liverpool based new wave synth pop duo China Crisis features Gary Daly and Eddie Lundon who started to work together at the age of 18. The release of “African and White” became China Crisis’ first hit in the UK, reaching No. 45, The follow-up single, “Christian”, made No.12 in early 1983 and brought them to national prominence. Their debut album peaked at No.21 in the Album Charts. During this period the band toured supporting Simple Minds. The second album, “Working With Fire and Steel” – Possible Pop Songs Volume Two, was released in November 1983. The album was a Top 20 success in the UK and China Crisis spent 1984 and 1985 marking their biggest chart run, The album included the single, “Wishful Thinking”, which peaked at No.9. Their third album, Flaunt The Imperfection, reached No.9 in the Album Charts in May 1985. The album included the hits “Black Man Ray” and “King in a Catholic Style (Wake Up)”. All three of these albums went gold in The UK

Finally Martika, the US pop singer-songwriter and actress who made an immediate impact on our shores with the No 5 hit ‘Toy Soldiers’ released in 1989 will also be appearing.  Other hits followed that included ‘I Feel The Earth Move’, ‘More Than You Know’, Love Thy Will Be Done’ (written by Prince) and ‘Martika’s Kitchen’. She had two internationally successful albums in the late 1980s/early 1990’s the first, ‘Martika’ went platinum in the UK and the latter ‘Martika’s Kitchen’ was co-produced by Prince. She has sold a total of four million albums worldwide. She began her career as a child actress, appearing in the hit movie ‘Annie’. She went on to be cast as ‘Gloria’ on the Disney children series ‘Kids Incorporated’ alongside Stacy Ferguson (Fergie, The Black Eyed Peas) and Mario Lopez.