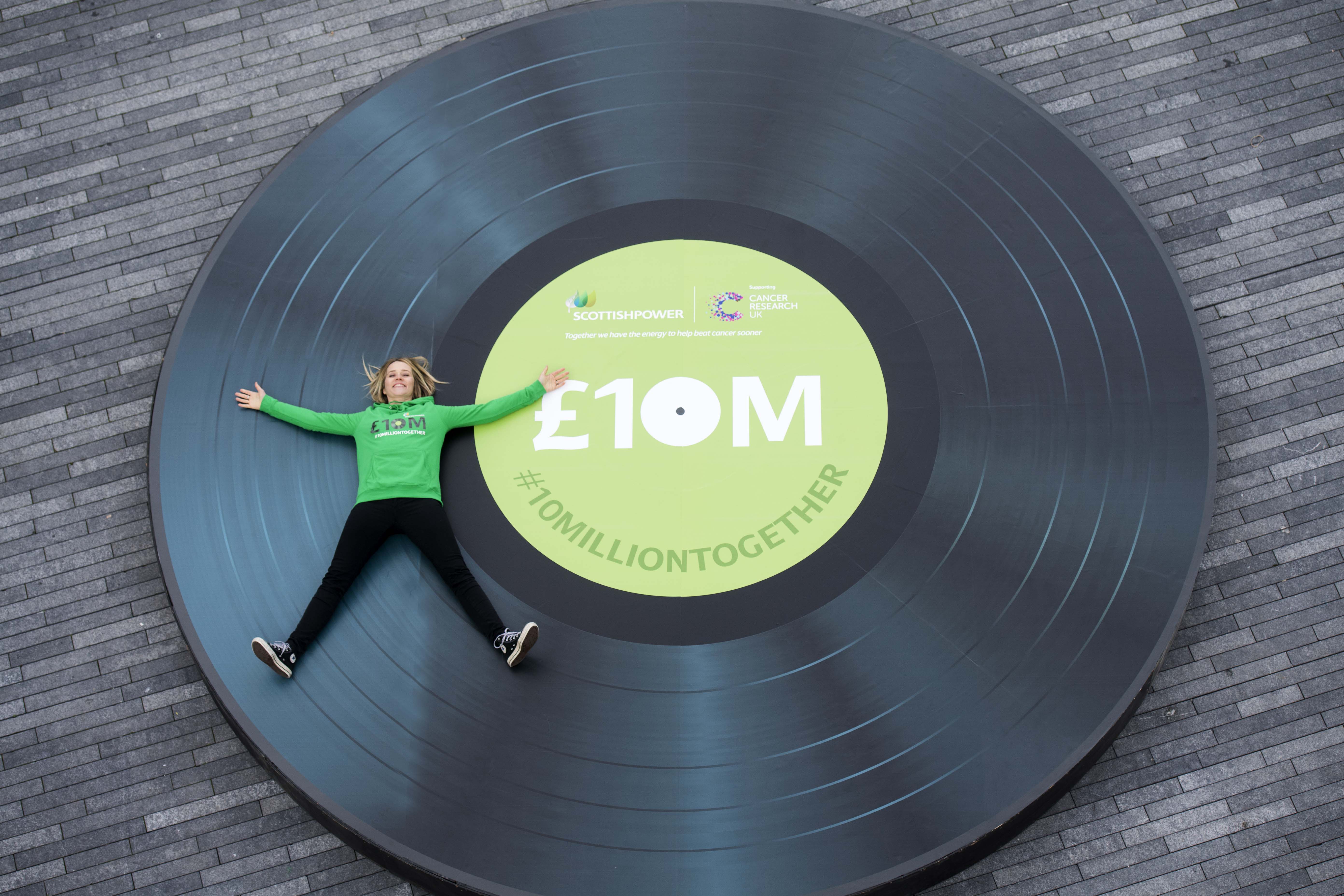 ScottishPower launched a three-year partnership with Cancer Research UK in 2012 with the aim of raising £5 million. Two years later it had smashed this fundraising goal and now, having extended its partnership last year, has reached a £10 million milestone in just four years.

The vital funds have been generated through a wide-range of creative initiatives and events including sponsorship of the Race for Life, Shine and Stand Up To Cancer campaigns, sales of a bespoke ‘Help Beat Cancer’ energy tariff and everything  from bake-offs to bikeathons and its latest employee fundraising initiative – ScottishPower does Strictly.

To celebrate the collective power of the people who played their part in taking on cancer, ScottishPower has created and released a new short-film on its social channels today (Wednesday, 2 November). The clip, featuring Edith, brings to life the efforts undertaken by all to help reach ‘£10 Million Together’ so that one day all cancers will be cured.

The celebrations kicked-off with Edith at The Scoop at Tower Bridge yesterday and ScottishPower employee Susan Lemon – one of the stars of the film, who bravely fought breast cancer in 2015 – by spinning on a giant record to mark the film launch and the £10 million milestone.

Edith understands first-hand the devastating impact cancer can have after losing her young cousin, grandfather and grandmother and two uncles to the disease. Edith’s mum Eleanor was also diagnosed with breast cancer in 2004 through a routine mammogram and is thankfully now cancer free. By joining forces with ScottishPower, Edith wants to highlight the important role that fundraising plays in helping to find kinder and better treatments.

Edith said: “The fact that one in two of us will be diagnosed with cancer at one point in our lives is a shocking stat. But it’s a harsh reality and we all need to work together to ensure that more people survive. That’s why I’m supporting ScottishPower today and celebrating its incredible fundraising efforts. £10 million in four years is an outstanding achievement and everyone who has played a part should be extremely proud.  It means so much to me to be in the film and be part of an event that is celebrating a fundraising total that will ultimately help bring forward the day when all cancers are cured”.

Susan Lemon was given the shocking news that she had breast cancer in 2015 and had to swiftly undergo chemo and radio therapy.  It was a tough time and she wanted to shield her two young boys from worry so didn’t tell them about her treatment until it was complete. By featuring in the film and taking part in today’s event she wants to say a big thank you to everyone who has helped raise £10 million and to encourage others to fundraise for Cancer Research UK.

Susan Lemon said: “When you are told that you have cancer, time literally stands still. Your life completely changes and you start thinking the unthinkable. For me, having to face up to the fact that I might not be there to see my boys grow up was terrifying. I had a tough fight on my hands but luckily I came out the other side – so many don’t.  With ongoing fundraising and research, I believe that Cancer Research UK will discover new treatments and cures for cancer. I’m so proud of everyone at ScottishPower for being part of helping to make this happen and can’t thank them enough for all working together”.

Neil Clitheroe, ScottishPower Global Retail Director said “Everyone at ScottishPower has pulled together and worked hard to raise this phenomenal amount of money in record time. Our commitment to making a difference stretches beyond energy and raising £10 million in just four years is a huge part of this. Our customers and employees like Susan have shown amazing support for Cancer Research UK and their willingness to get involved in the fight against cancer has been inspiring.  It’s great to have Edith’s support and we’re committed to continuing to raise funds because together we have the energy to help beat cancer sooner.”

Frances Milner, Executive Director, Philanthropy & Partnerships, Cancer Research UK said: “£10 million is an incredible amount of money and we are so grateful to ScottishPower for their support. Our ambition at Cancer Research UK is to bring forward the day when all cancers are cured and this will only be possible thanks to our supporters, as we receive no Government funding for our research. ScottishPower employees have thrown themselves heart and soul into fundraising for the charity and should feel immensely proud of this amazing achievement.”

Cancer Research UK is the world’s leading cancer charity dedicated to beating cancer through research. Millions of lives have been saved by discovering new ways to prevent, diagnose and treat cancer, and thanks to this progress survival rates have doubled over the past 40 years.