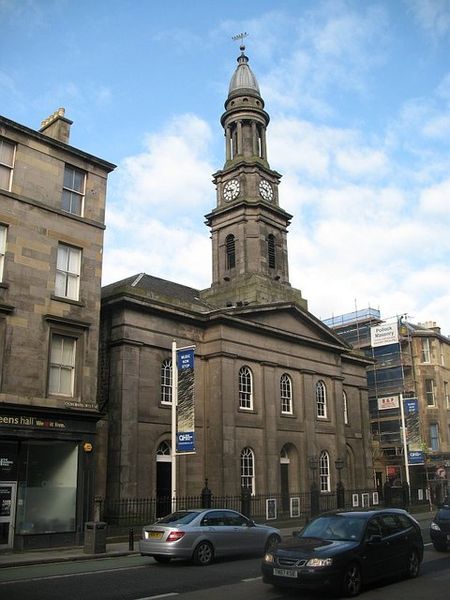 This is a big month for The Queen’s Hall when they host the Christmas concert that should definitely be on your list.

The music of Scotland’s own Sir Peter Maxwell Davies is celebrated with an outing for his iconic work An Orkney Wedding as a fitting crescendo for a concert which begins with Sibelius’ The Tempest : Suite No 2.

But the end will really come with the bagpipes telling you it’s time to go home! Another new album has meant a busy year for Blue Rose Code, but it is his rise which is both breakneck and breathtaking. He began the year with a standing ovation at Celtic Connections and an award nomination for the album.  Now he will end it in his home town alongside his band, the Edinburgh Contemporary Choir and guests Zervas & Pepper who all join him on stage. Ross Wilson is celebrating a big year with a homecoming gig. And Lo! The Bird is On the Wing

Listen to some of his music here.

An Evening with Lau

This is the final night of The Bell That Never Rang World Tour and you should try hard not to miss it!. They are winners of the BBC 2 Radio 2 Folk Awards and have appeared on Later….With Jools Holland. Far from being mainstream or ordinary they are masters of the acoustic folk tradition mixed with some electronica. Theirs was the Best Scottish Album of the Year in 2015 and they were nominees this year. Great way to relax after your Sunday Dinner with some Mozart and Beethoven in the mix today. Kristian Bezuidenhout will play fortepiano and the SCO Wind Soloists will be in the forefront.

An American from Ohio he has been compared to Nick Drake and Simon & Garfunkel. He is showcasing his new album Onward and Sideways.

The fortepiano is the instrumental ‘technology’ – Kristian Bezuidenhout’s word – that Mozart knew and loved, and for which he effectively created his own genre in Vienna in the 1780s: the piano concertos that he would compose, perform, and sell in his subscription concerts as an independent musician in the capital of the Habsburg Empire. A wee bit early for Christmas unless you are off on holiday soon afterwards! This festive concert will include original music written by Smith as well as traditional tunes. There will be a surprise guest…….

Martineau is accompanied by friends and colleagues in a concert which will form a musical tribute to his mother, Hester Dickson Martineau. Some members of the Scottish Chamber Orchestra and no fewer than eight cellists will join him this evening. The proceeds of the concert will be donated to the Edinburgh Breast Cancer Institute.

Born in Edinburgh he is known for his own series at the Wigmore Hall and appearances at the Edinburgh Festival.

Edging ever closer to Christmas with the Clarsach Society who invite you to a charity concert with the harps of Na Clarsairean and the George Watson’s College Caritas Choir.

A chance for you to have a bit of pre Christmas cheer as the Scottish National Jazz Orchestra combine with the Tommy Smith Youth Jazz Orchestra  to bring you a double bill of swinging jazz.

As well as Strauss there will be some Schubert thrown in to this the final SCO concert at the Queen’s Hall for the year. The First Horn Concerto No 2 in E flat was written when Strauss was not even twenty years old.

Just the thing to occupy children while presents are being bought for them! All the best bits of Handel’s Messiah for you to sing along to.

Tickets here.  and free for adults who have tickets for the evening performance

This is one of the best known pieces of Christmas music. It’s all about the angels and Dunedin under the direction of John Butt will bring it all to life.

The first of two nights bound to be very popular with those in the know. Phil is joined by Eddi Reader, Karen Matheson and John McCusker. There will be laughter and music galore – and you are allowed to sing along!

Just in case you can’t make it on the 20th there is a second night of fun and laughter with the  accordionist supreme Mr Phil Cunningham and friends. His ‘breezy banter’ will get your Christmas started. Afore the Bells : Hogmanay At The Queen’s Hall

This is the way to see the old year out – dance your socks off at The Queen’s Hall! This is a real party with good food, drink and music.

There will be a traditional ceilidh with Heeliegoleerie with callers to keep you in the right place at the right time. A piper will bring the new year in at the appropriate moment and you will be cosy and warm in one of Edinburgh’s prettiest music venues.