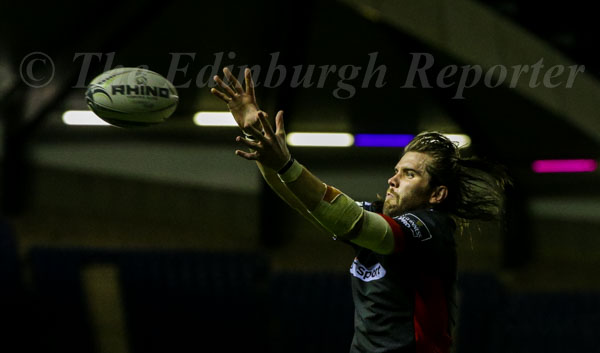 Among the incoming players are prop WP Nel, back-row Hamish Watson, and centre Phil Burleigh, who have recovered from their respective injuries to feature in Hodge’s starting XV.

Lock Ben Toolis (above) will reach a 50-cap landmark as he takes to the field for tomorrow’s match.

Hodge said: “There’s been a good buzz around the squad in the build-up to this game and we’re excited about getting back out in front of our home fans and putting in a positive performance. “We’ve had two good wins in recent weeks but we’re going to have to raise our game once again to compete against a quality Harlequins outfit.

“This game will be a real measure of where we’re at as a team but it’s a challenge we’re looking to absorb and take in our stride.

“We’re delighted to welcome a number of players back from injury and they should prove a real boost to the side.”

In the back-three, Blair Kinghorn is promoted from the bench to start at full-back, while Tom Brown and Damien Hoyland – who both scored twice on their last outing – return to the wings.

Burleigh starts in the number 12 jersey and is partnered by the incoming Chris Dean in midfield.

Jason Tovey is the sole back to retain his spot in the side as he continues at stand-off. Sean Kennedy starts in the scrum-half berth, with Sam Hidalgo-Clyne moving to the bench.

Returning to the starting front-row alongside Nel is loosehead prop Rory Sutherland and hooker Ross Ford.

In the second-row, Fraser McKenzie makes way for Grant Gilchrist, who will captain the side, completing an all-Scotland international front-five.

Nasi Manu – who scored a hat-trick in last week’s victory over Timisoara Saracens – continues at number eight, with the incoming Magnus Bradbury and Watson slotting in at blindside and openside flanker respectively.

Newly-signed tighthead prop Felipe Arregui is set to make his Edinburgh Rugby debut if he is called upon from the bench.