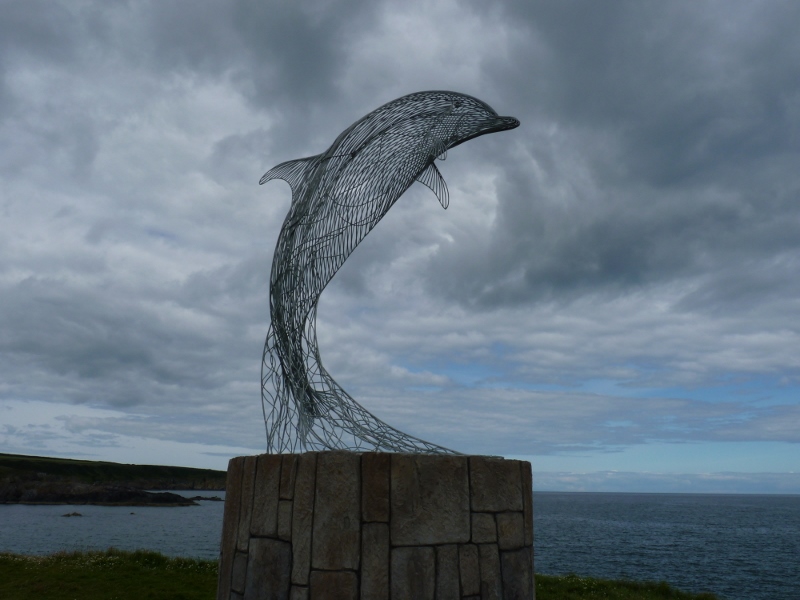 It’s so good to hear from my wildlife friends that they’ve seen 30 or 40 dolphins in the Firth of Forth in recent days.  They describe, with great excitement, how these large and friendly creatures followed their boat, leapt into the air and smiled at them as they swam past, just a few metres away.

The experts at the Scottish Seabird Centre at North Berwick confirm than an  unusual number of dolphins have been sighted around the Bass Rock, Craigleith and the Isle of May in the last week or so and they put that down to shoals mackerel and herring staying inshore because of the warm weather we’ve been enjoying over the past month.

The dolphins are, apparently, part of the pod who patrol all along the east coast of Scotland, from the Moray Firth to the Forth.  They are thus the very same dolphins I failed to see on my summer cycling holiday along the Moray Firth. At Cullen we were encouraged to look out for “our 129 resident dolphins” but obviously they were on their holidays too, in my home waters.

But the very fact that we are all so excited by seeing the dolphins is testament to the fact that they are unusual. We were told this week that 11 per cent of Scotland’s wildlife is in danger of extinction. The “State of Nature” report, from some 50 wildlife organisations, found that of the 4,000 species of plants and animals they studied, more than half of them are in decline. The report blames agricultural practices and climate change.

And with immaculate timing, the UK Committee on Climate Change brought out its annual report this week which warned that we have hardly begun to reduce our carbon emissions from agriculture and transport. Scotland, it says, did well last year in cutting our overall emissions  – they were 46 per cent below the baseline in 1990, ahead of the target of 42 per cent. But that was largely due to a mild winter which kept household heating emissions down.  We clearly have a long way to go to save our natural world ……of which the leaping dolphin is but one exciting example.

We’ve also been finding out this week that there’s a long way to go on the yellow brick road to Brexit. Scotland’s Lord Protector, Mike Russell, has been in London for “talks” with the UK minister in charge of exit negotiations, David Davis, but I suspect it was more of harangue from Mr Russell on the need for Scotland to stay in the single market, even if we do leave the European Union.

Nicola Sturgeon has warned of a “lost decade” if Scotland is dragged out of the EU against its wishes. She was backed up by a Fraser of Allander report which warned of a 6 per cent or £1.6bn cut in public spending coming down the line as a result of uncertainty over Brexit, UK austerity measures, and falling tax revenues.

As if to keep us whistling in the dark though, the latest job figures are astonishingly cheerful – unemployment down to 4.7 per cent, slightly below the UK level and the overall employment figure is up to 2.6m. But these are the figures to the beginning of July, before the shudder of the European referendum was felt.

The fairly-new education secretary John Swinney has mystified us all this week with an announcement that he wants give head teachers more power. No one knows exactly what this means, so he has set up a “review” to find out.  Does it mean, for instance, that head teachers will hire and fire staff, set their own curriculum, decide which pupils to accept ?  Or will they just have control of the mini-bus budget ?  I suspect the latter and not much will change.

Meanwhile the government’s Food Standards Agency has taken dramatic action against the Lanarkshire firm Errington Cheese Ltd, ordering its cheeses to be withdrawn from pubic sale. It’s over fears that they are linked to two outbreaks E.coli poisoning.  The firm itself says its cheeses are safe and there is no evidence that they contain the dangerous 0157 strain of the organism. But the Agency says its tests show the presence of E.coli 0157 in the cheeses and most of the 22 people affected by the outbreaks have eaten Errington cheese.  The Agency says it’s fully aware of the impact on the firm of issuing a food alert but there is a serious risk to public health.

However, we had example this week of a government agency getting it wrong, shockingly wrong.  Public Health England took the Scottish nurse Pauline Cafferkey to the Nursing and Midwifery Council alleging that she had hidden her ebola infection from staff at Heathrow Airport on her return from Sierra Leone in 2014.  Thankfully, the move backfired on Public Health England when it emerged during the panel hearing in Edinburgh that the arrangements for checking health workers coming home from Sierra Leone were “disorganised and chaotic” and Miss Cafferkey could not be blamed for boarding a plane home to Scotland when her temperature was unusually high.

The wave of public sympathy for Pauline Cafferkey could almost be seen sweeping across Scotland. Here was a nurse who volunteered to go to Africa to treat people suffering from the dreaded ebola outbreak, only to catch it herself and spend months in hospital fighting for her life. Now she has been dragged through a disciplinary hearing, during which she was blamed for what turned out to be the shortcomings of her accusers. Dreadful. As her lawyer put it, in beautiful understatement: “No doubt lessons have been learned.”

Finally, I can only hope you haven’t heard of Scotland’s latest humiliation. Our best football team – I cannot bear to name them – went to Barcelona this week only to be beaten 7-0. Yes Seven-Nil. No doubt lessons have been learned.