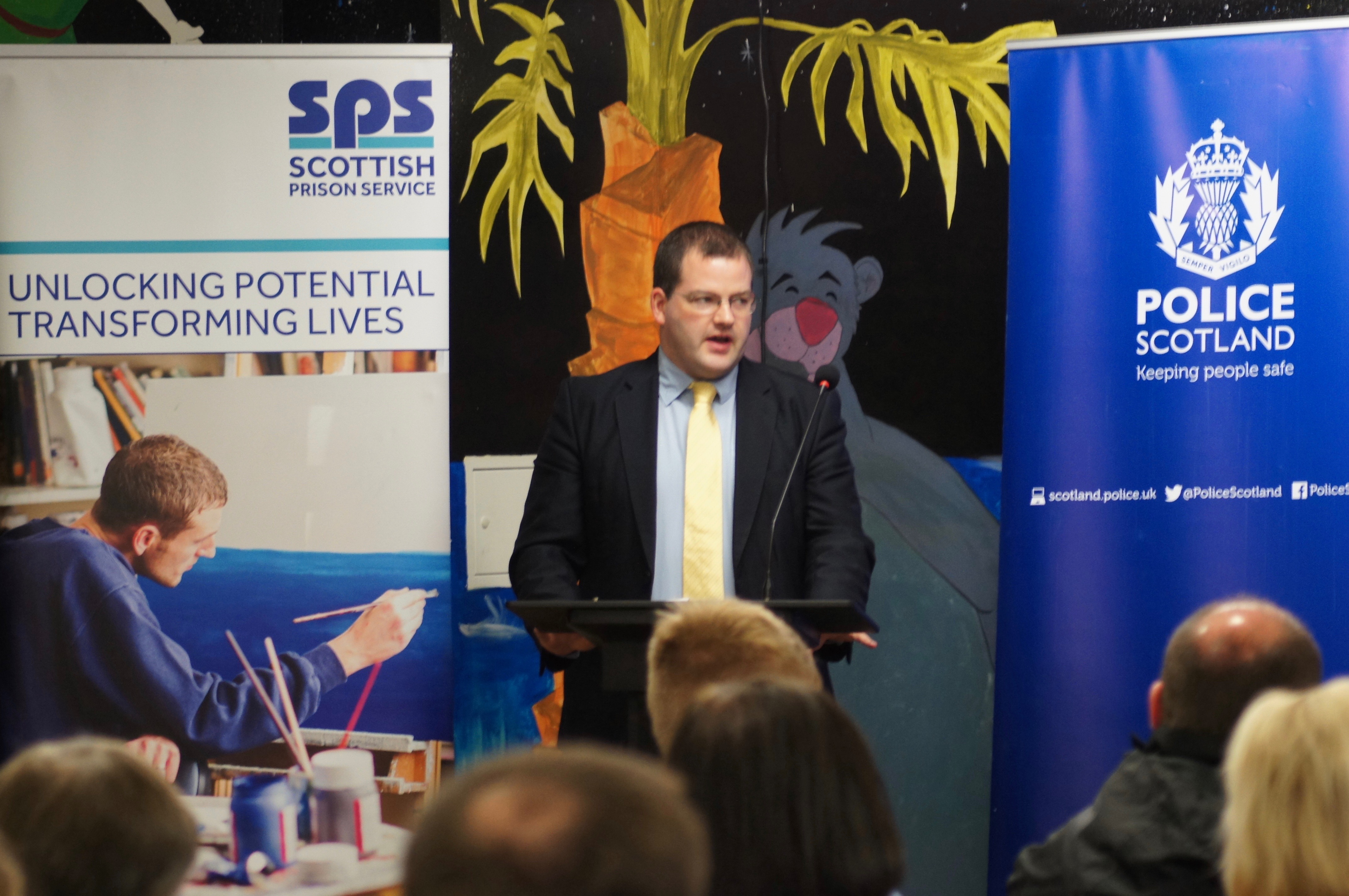 As part of the Meet the Police initiative by Edinburgh Police, prisoners at HMP Edinburgh have produced a booklet called My Daddy and the Police.

The Edinburgh Reporter NEWS – Meet the Police at HMP Edinburgh from Phyllis Stephen on Vimeo.

The initiative was a collaboration between Police Scotland and the Scottish Prison Service and all those involved were at a press call this morning at Saughton to highlight the good work. Mark McDonald MSP and Minister for Childcare and Early Years was there to hear about the contents and the effect that the booklet is having on prisoners’ children.

Mr McDonald said:” This initiative is about building positive relationships between police, visiting children and also the wider community through a range of activities and community outreach events as part of the Meet the Police joint initiative.

“It’s great to hear that that has helped children to see the police in a positive light and sparked an enthusiasm for the work of the police in the local area. I understand that this booklet has already received awards and been nominated for others. I hope that as well as this that the initiative can be shared across the prison service here in Scotland.  It is an opportunity for us to do something quite groundbreaking in Scotland which other parts of the world might well take a look at and copy.” Nicola Ceesey of Edinburgh Visitors Centre was central to the initiative and she said:” We identified a need for dads participating in the children’s visits. We approached them with the idea of setting up a focus group to develop a resource for children to help them address the questions that they had asked through our work. To say that the group was unconvinced about the prospects of working with the police really is an understatement.

“Remember this is a group of men from our communities who have never had any positive experiences with the police. There are 27,000 children with a parent in prison. In terms of going forward the group are adamant that they don’t want their children to have the same negative experiences that they have had. They don’t want their children to distrust the police.

“This shows great determination and great resilience. The production of this booklet is testament to the strength of partnership working and the creativity and drive of those in custody to take responsibility for lessening the burden of their imprisonment on their children and families. The group also put forward a series of recommendations to the police which will form part of a continuous learning course to be delivered here at the prison.”

Colin McConnell Chief Executive Scottish Prison Service said : “Everybody, regardless of who you are or what your background is, needs help from time to time. Often we look to the police for that help. It should trouble us if there are some people in our society who are unable to make use of that service and to make that approach to the police. It is something peculiarly Scottish that we recognise the deep social issues and prejudices that need to be tackled. Today we are hearing about an initiative which tackles an age old problem which for many communities has seemed intractable.

“Today prisons and all the agencies who live and work here see them as places for hope, for good and for progress.  So I think we should really celebrate what is going on here in Edinburgh prison which is quite the opposite of times gone by. Our Visitor Centre is leading the way in partnership with Police Scotland to bring the community in and working together with the most impressionable part of society, the children. Superintendent Richard Thomas of Edinburgh Division said : “Meet the Police is really an example of collaborative working and various agencies have delivered real change and real long term outcomes.  It is all about agencies such as Barnardo’s and Salvation Army who have all come together to go out and face up to the children’s questions. It is all about creating change with the police and I would like to see more police officers learning from our experience about how this initiative has progressed and make changes to our behaviour as to how we engage with the public. It really is a unique exemplary initiative and we hope that it will be a beacon and a shining example of positive engagement.”

Joanna Cherry MP for Edinburgh South West said: “I think this is a perfect example of rehabilitation at work.

“There is a great movement in the prison service in England to look at what is going on in Scotland, and to look at the model of having less short term sentences and look at the importance of prisoner rehabilitation.

“What is great about this project is that it does not just provide rehabilitation for prisoners themselves, it helps the prisoners’ children see that the police are not the enemy, that the prison service is not the enemy. Hopefully it will break down social barriers and the children themselves will be less likely to become offenders.”

Chief Inspector Helen Harrison local area commander for Edinburgh South West covers the area in which the prison is situated. She agreed that the project puts a human face on the challenges that prisoners face. She said: “I think it is really important messages that they are delivering to the children impacted by this. It is a positive piece of work to be involved in. These ideas are coming straight from the prisoners who have experienced them. There is a lot we can learn from the prisoners. One negative incident can have such a long lasting effect on prisoners and their families. We need to be aware of our actions as well and build on that knowledge.”

Gordon Roy Operations Manager SPS based at HMP Edinburgh told us about the importance of family visits to HMP Edinburgh. He said:  “It was identified that basic contact with children was being lost during prison visits so we developed children only visits which became more interactive and prisoners were able to play with their children. But out of those visits it became apparent that some children expressed view that the police had taken their daddy away.

“That developed into a programme where the police tried to break down barriers with the children by working and playing with them in the Visitors Centre.

“Each prisoner is entitled to about four or five visits per month. During the visits some children have even started dressing up as Police officers. We encourage the dads to get off their seats and play with their children which would have been unheard of a year ago.” PC Tracey Gunn has been largely responsible for the Police Scotland involvement with producing the booklet. She explained : “The Meet the Police initiative began about four years ago but we have been working on the booklet for the last six months. It began with comments from the children.

“Now police officers bring along motorbikes for the dads and children to sit on and play with the lights and sirens!

“There is a lot of laughter and banter. Children come up to me and call me by name wondering what activities we will be doing this week. This is the best work I have done in all my 22 years service in the police.”

Neil has been in Saughton for five months and he was pleased to be involved with producing the booklet: “When I got arrested I made sure that I handed myself into the police so that the effect on my daughter and partner was minimal.

“I am glad that I was picked because I now have a different perception of what the police do. At the start I didn’t really want to be involved, but the more I got into it the more I realised it was a good thing.

Partner Jenna agreed saying: “I think it’s great. I think it is a great idea to help the kids understand what is going on.” Charlene was there from Glasgow with her children Abi-Kate and Stewart to visit her husband who is being held on remand.

She said : “I felt that I was left on my own to explain to my daughter where Dad was and what was going on. It’s a struggle sometimes and maybe I don’t always word it in a way that she would understand so maybe she had more questions.

“When we came here and Nicola helped answer some of my daughter’s questions it really helped me to explain what was going on in our family life. My husband has been in prison for nine months on remand and we visit once a week. Hopefully he might be moved somewhere more local to where we live and we can visit more often.”