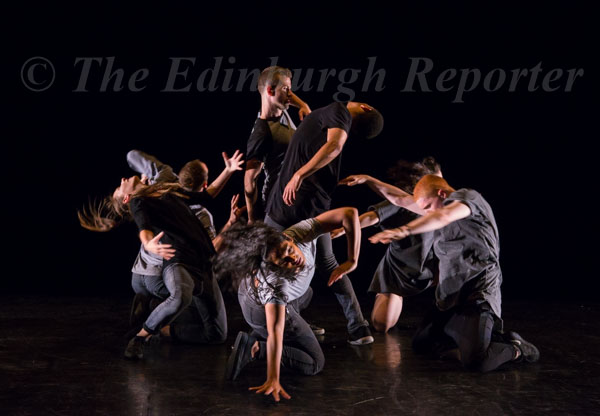 “Can you stay true to yourself, when everything suggests you change? 201’s raw, contemporary hip hop returns in Smother: a story of two men’s broken encounter. Returning after a sold out Edinburgh Fringe 2015 and acclaimed international tour, this ground-breaking production touches on themes of addiction, obsession and commitment.” it says in the press release. The ER’s photographer, John Preece, was privileged to be invited to take some production photos for the company and to see an edited – as in lights and repeated scenes – version of the show.

“Well, not knowing what I was in for, I was impressed with the combination of music and dance performed under the, relatively, trying conditions of having a couple of cameras – Photographer, Lesley Martin was also there for ‘the papers’ – pointed at them and being asked ‘Could you do that bit again’ (and again, sometimes). The cast were extremely patient and professional and made the job easier than, at least, I was expecting. Highlight, for me, was the piece playing out the building relationship between two of the female cast. Think ‘BBC Licence advert’ only a lot more, painfully, realistic.”