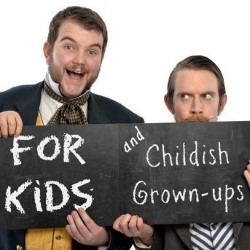 Time-travelling Victorian magic duo Morgan & West return to unload another boxful of bafflement and impossibility.  Witness a mountain of mysterious magic, a hatful of hyper-reality, and of course a truck full of tricks and tea (sadly there are no actual mountains or trucks on stage during the show, Mr West simply would not have them).  Mixing brain-busting illusion and good old fashioned tomfoolery, Morgan & West present a show for all the family, where magic and silliness abound!  Fun for ages five to 105.

Picking a good children’s show is tricky, even more so than with the others on
offer throughout the Fringe brochure.  I’ve seen some good ones other the years, but I’ve also seen some of the biggest wastes of my money, the equivalent of Victoria Wood’s wriggly fingers sketch.

My daughter is of an age that she helps picks the shows and the blurb for this one was one that attracted us both.  I’m pleased to say, she has inherited her father’s good taste and run of shows in 2016.

Morgan and West are great fun and play the part of Victorian prestidigitators extremely well, with Mr Robert West showing just the right level of vaudevillian scorn for small people.  Rhys Morgan superbly counters him with an enthusiastic avuncular approach.

The combination works well and their patter and banter with the audience is a joy.  Through  some wonderful, Tommy Cooper-esque magic and you have a magical recipe for fun and laughter for all ages.  To prove that point, my mother also saw the show with us.  My father always said that she doesn’t have a sense of humour and she really disliked Cooper; slapstick, of all sorts, has always left her cold.

Despite all of this, she enjoyed the show and regularly said during the afternoon how all the children in the audience were enraptured.  She may have thought it silly and daft but she still saw its appeal and relaxed into it.

Go and see Morgan & West’s Utterly Spiffing Spectacular Magic Show for Kids (and Childish Grown-Ups!), whatever your age or comedy inclination.  Bring your children too; failing that, borrow some.  You will see a great variation on the classic bottle and tube trick, which after all these days is something to relish.