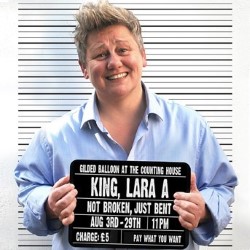 Step away from the hustle and bustle of the big theatre and multi-layer seating auditoriums across the vast Fringe, to pick up a performance that makes you  laugh and which also educates you.

The attic of the Gilded Balloon’s Counting House is the intimate venue for an hour with Londoner Lara A King.  She takes the windswept (ok, it’s down to an oscillating fan in this warm room) audience on a journey that begins with her arrest and ends with a powerful message born out of her own stupidity.

That severity of her transgression, that sees her spend the night behind a 5 inch thick steel prison door in a cell with a pretty baby blue strip of tiles, isn’t made clear until the end of a show that delivers a timeline of King’s payback to society.

Despite it being her most ‘horrific, shameful f*ck-up’ in her life so far, King has created a witty piece of honest observational comedy that has a series of twists and turns along the way, including her bonding with young Curly in Tottenham and a quandary over whether or not to smile in that post-arrest mugshot photo.

It’s more hard-hitting than side-splitting, but King’s ability to bounceback to deliver comedy of a somewhat remorseful nature certainly takes balls and keeps you guessing to the very end.

Lara A King is at the Gilded Balloon Counting House Attic, 11pm.