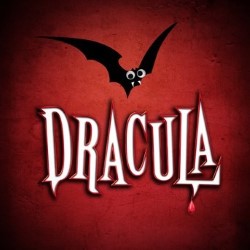 Suitable for children 12+. (But they might be suitable for the plot!)

Please note stage blood will be used – possibly yours…

Sticking their future professional career necks out Let Them Call It Mischief theatre company know the stakes are high with this schlock-horror hard-gore slapstick spoof on the Dracula opus. More hammy than a canoe sized sausage roll crewed by gammon suited pigs rowing with black pudding oars, excess is a concept they left bleeding on the abattoir floor of their credibility. With us so far? We must hurry, darkness falls.

The show opens with Queen’s Another One Bites The Dust. Clue there folks. Jonathan Harker opens his journal to fiancée Mina, no wallflower her, she wants emancipation and has a profound insight into the arcane rules of cricket – in particular lbw, but that is not important right now – (spoiler alert) but it will be!

Before Jonathan is lured in to the Harpy embraces of Dracula’s handmaidens (best we move on as to what they get up to with those hands) he insists that his client writes his will. Dracula poo poos that silly notion. Wonder why, hmm?

There’s a running trope through out the show where character changeovers allow all sorts of mischievous gags to ameliorate these rude but necessary mechanicals. Quite how we get to a Romeo & Juliet balcony scene parody isn’t quite clear but it hardly matters. Van Helsing’s chainsaw cod ‘European’ accent has him taking the role (amongst others, not least the incomprehensible chip eating Whitby local idiot and cage rattling Renfield) as top man ‘Wampeerie’ exterminator.

His extemporaneous rant riff about Wampeeries being damnable illegal immigrants has the audience bleeding from their eyes. Will Lucy’s love for Dracula allow him to recover his mortal soul, will her shrewd eye for a devious leg-spin googly save the day? Who the hell cares! It has absolutely no bearing on the fact that Bram Stoker is spinning in his grave. Poor man – well he started it!

They Hammer it home with fangtastic panache – a show to die for.