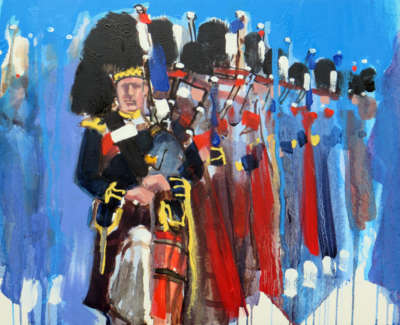 In a new exhibition, Jules George takes us through a gallery of the Pipes and Drums, a central part of the Royal Edinburgh Military Tattoo.

Jules was artist in residence for last year’s Tattoo. He is captivated by the vividness and bright, uplifting and national essence of the pipes and drums, and likens the striking nature of the Tattoo to his experience as a war artist in Afghanistan in 2010.

He says that he has  ”Swapped guns for pipes and drums.” Brigadier David Allfrey, Chief Executive and Producer of the Royal Edinburgh Military Tattoo said: ”We have hosted an Artist in Residence since 2011. We were delighted to give Jules special access to the Tattoo and backstage. In all weathers, he filled his notebooks with colourful images and notes that offer special insights into our productions.”

”The Tattoo offers a rich myriad of visual and aural images, but each performance lasts just for an instant. Jules’ pictures will help hold the magic for a while longer.”

The Exhibition is at the  Open Eye Gallery from 5-19 September.

Jules George has been a professional artist since leaving Staffordshire University in 1992. He completed his masters at Edinburgh College of Art in 1998.

Since then, he has worked as a war artist sponsored by the MOD. Highlights include ‘Weighing Anchor- An artist at sea’ and ‘Into the Valley-Scenes of an Afghan conflict.’