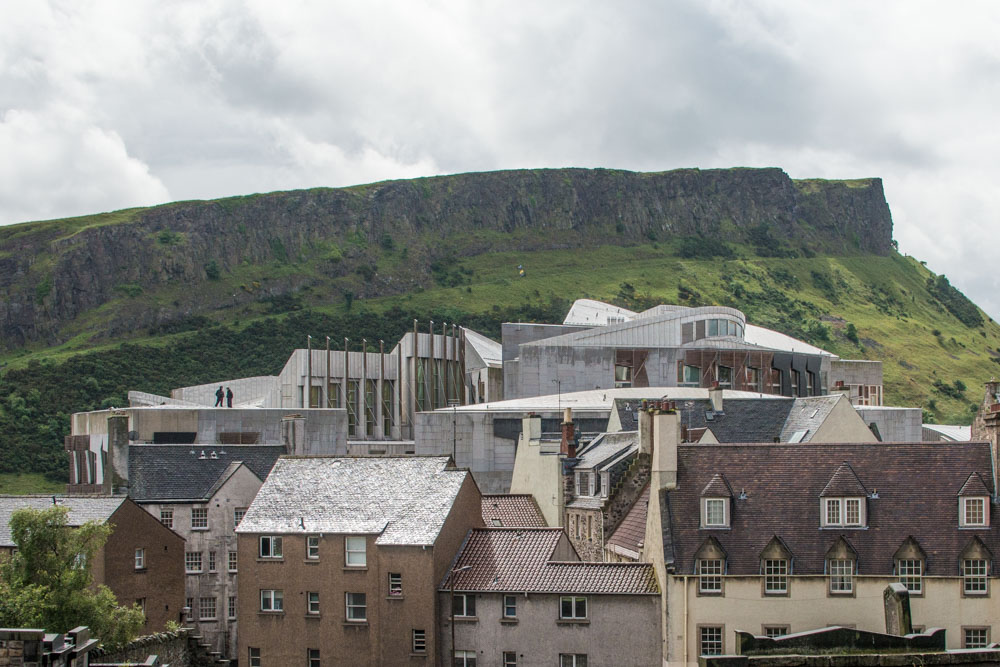 I can report that Scotland is staying “calm and collected” in the midst of the political and emotional turmoil swirling round the rest of the so-called United Kingdom.  We, at least, are complying with the Queen’s wishes as she opened the new session of the Scottish Parliament on Saturday.  She acknowledged that we face an “increasingly challenging world” but she urged us to “make room for quiet thinking and contemplation.”

The contrast between two parts of her kingdom could hardly be clearer. England is sharply divided over Europe, immigration, poverty, political leadership, the role of the state etc. But Scotland is standing firm for Europe and increasingly for independence.  And there’s certainly no doubt about its political leadership.

The two thousand participants in the “Riding of Parliament” on Saturday put on a glittering display of unity and national high spirits.  I say “glittering” because the sun came out after a shower of light rain and added its own sparkle to the occasion. The parade was led by the band of the Royal Regiment of Scotland, followed by five or six other bands, youth theatre groups, Scouts, Boys Brigade, Duke of Edinburgh and Princes Trust contingents, a Royal Mail coach and horses, MSPs and their proud families, a large Chinese dragon, a party of Shetland Vikings, Polish, Punjabie, and Highland dancers and nominated “local heroes” who had done something extraordinary in the home communities.

Right at the end, outside Holyrood, there was Nicola Sturgeon accompanied by a children’s samba band mounted on a long red lorry.  She mingled with the crowds lining the pavements and posed for many a group photograph. It was a triumphant entry to the parliamentary field where, for the rest of the afternoon, the crowds were entertained by a mini-highland games, dance shows, arts and crafts for the children and demonstrations of falconry and bee-keeping. Despite the return of the showers, this was a statement of Scottish good cheer.

What a contrast with poor old England, and specifically Westminster, mired in contention, confusion and fratricide, in both main parties.  No one seems to know what to do down there. There’s hesitation over the Brexit negotiations. The Chancellor has abandoned his plan for an emergency budget and his target of eliminating the deficit by 2020.  The Queen’s plea to stay calm has an air of desperation about it.

It would all be funny, if it weren’t so serious.  Nations falling apart, and falling out, was not something we wanted to hear as we remembered the 100th anniversary of the Battle of the Somme this weekend.  Scotland has been remembering its own fallen. Among the 20,000 British soldiers killed on the first day of the battle were men from five Scottish battalions; the Kings Own Scottish Borders, the 15th Royal Scots, the 16th Royal Scots ( the famous McCrae’s from Hearts Football Club ), the 16th Highland Light Infantry  (the Boys Brigade battalion) and the 17th City of Glasgow battalion.

At a ceremony at Edinburgh Castle, a two minute silence ended with a dreadful, shrill whistle-blow which once sent the soldiers over the top. It made my nerves jangle and my eyes weep.

The whistle belonged to artillery officer Robert Hamilton and was blown by his great nephew, Alan, also a soldier, who said he will now pass it on to his son, currently serving as a corporal in the army.

It should remind us all how easily we can find ourselves dragged into war.