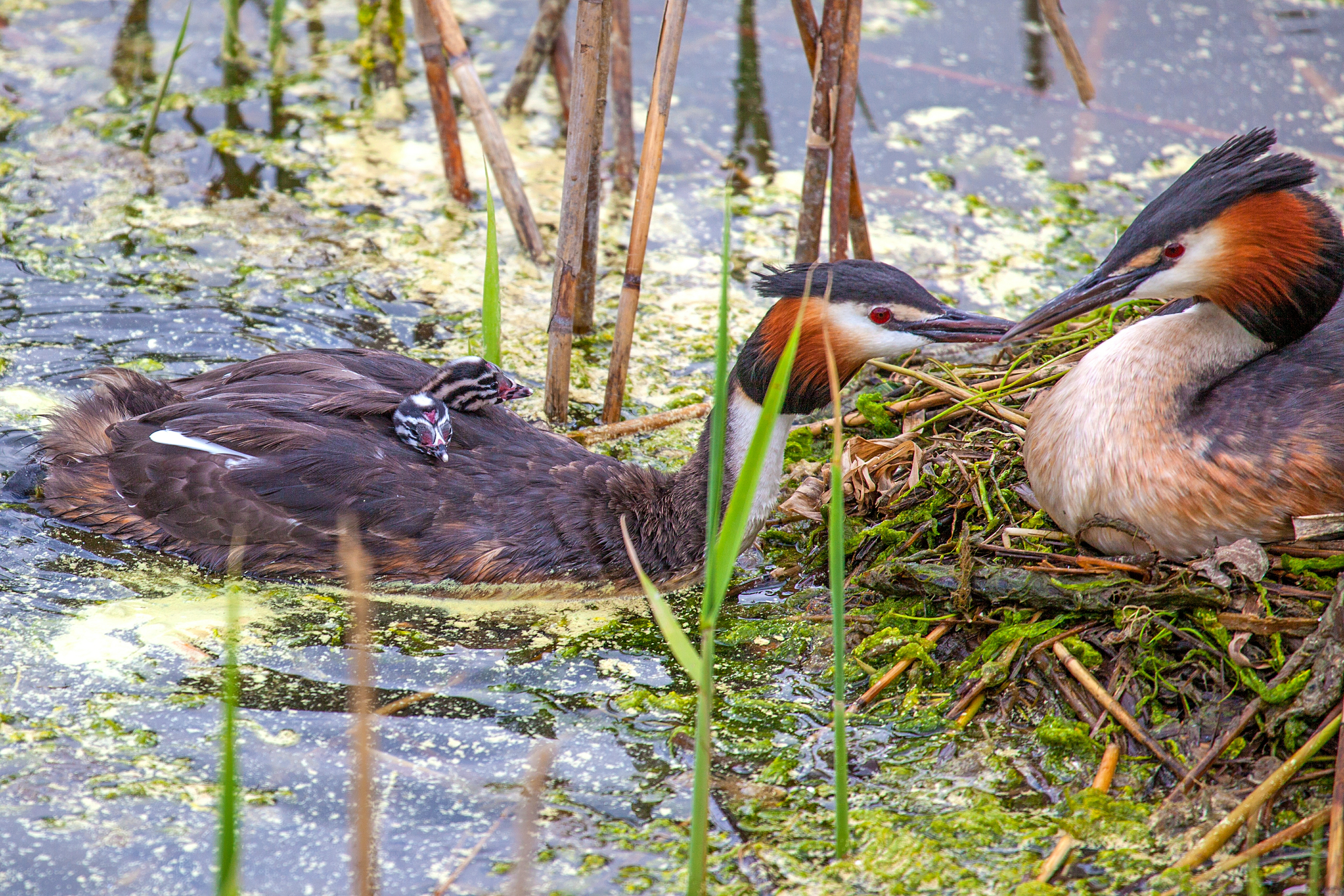 Down at my local nature reserve, at the foot of Arthur’s Seat, we were rather proud of our family of great crested grebes. It was just the second year we had seen them nesting at our lochside.  Alas, as the two young chicks were finding their feet this year, they suddenly disappeared……eaten by our resident otter, we think.  As we were telling this story to some of the people who were taking part in the RSPB’s Bio-blitz event last Saturday, a lady remarked, with a sigh: “I suppose it’s nature’s way.”

On Sunday, a lady going into church tried to comfort me in my deep depression over the EU referendum result, said: “It’s God’s way.”  Hell no, I thought.  Neither nature nor God are responsible for this disaster.  It’s of England’s making and it’s not clear how we Scots can get out of it. Like the great crested grebes, it’s probably too late to try again, at least this season.  Even the god of football is angry and has sent in the Icelanders to kick England out of the European Championship. Nicola Sturgeon has spent the last few days trying to find a way back into Europe for Scotland. On Tuesday she won the support of the Scottish Parliament to pursue all possible options.  She has begun sounding out European leaders on whether Scotland, as a subsidiary nation within the UK, can opt out of Brexit – the so-called “Greenland in reverse” option. She is seeking legal advice on whether the Scottish Parliament can block a British exit by voting down any changes to Scottish law.  And, of course, up her sleeve, is the trump card, another referendum on Scottish independence.

There are difficulties with this last option.  The UK Government may declare it illegal – as they tried to do last time.  A second referendum on independence would need to be held in the next two years – as the UK negotiates its exit – and that may not be enough time to allow a “settled will” to emerge. The opinion polls are showing a surge for independence in the wake of the Brexit vote – but not by that much (54 per cent now favour independence according to the latest opinion poll, by Survation).  And a third difficulty is the deal that an independent Scotland might expect if it seeks to join the EU in its own right. Might we have to adopt the Euro, for example?

Of course, there is the possibility that Brexit might never happen.  Out of the chaos that is Westminster, who knows what might emerge. The exit negotiations will take a long time for sure and the deal may be so awful that it will have to go to another referendum.  The alternative trading arrangements too might prove difficult to digest.

What happens if there is a General Election in the meantime and a party advocating staying in the EU wins a handsome majority ?  Who can foretell the future, especially starting from here, with stock markets plunging, the two main Westminster parties in turmoil, and everyone running around nursing regrets and a headache.  Thank goodness for the unelected bureaucrats who will keep the show on the road through this wayward summer.

Here in Scotland we are about to being our summer holidays.  In Glasgow, the schools are already on holiday.  The Edinburgh trades fortnight holiday begins next week.  Aberdeen and Dundee follow in mid-July.  It brings to an end a school year which has seen education rise up the public agenda…concern over funding, staff retiring, the new curriculum, the attainment gap and, in Edinburgh’s case, the unsafe state of the buildings.

Every political party fought the Scottish elections in May on a pledge to make education their top priority. None of them really meant it, of course, because they also promised more money for the NHS, for transport, for the environment and anything else they thought would please the voters.

However, the new Education Secretary John Swinney announced this week that he would be sending inspectors into every local council to check on how schools are being run. He pledged to cut bureaucracy and put more power in the hands of headteachers. But he also insisted he was sticking by the government’s plan to introduce new national tests, despite the opposition of the teachers unions.

For some children, the summer has got off to a disastrous start.  A rollercoaster in Strathclyde Country Park flew off its rails and plunged 20ft to the ground. Ten people were injured, two boys very seriously.  The rollercoaster had apparently passed an inspection just weeks before.

This week we had the final report from Dame Elish Angiolini into the “baby ashes scandal.”   She looked into some 200 cases where families of very young children or still born babies were told by crematorium staff there were no ashes available, when in fact, they were disposed of in the crematorium grounds. The practice took place over decades at Mortonhall in Edinburgh, where there’s already been an inquiry.

But Dame Elish found that at Hazelhead Crematorium in Aberdeen the bodies of young babies were sometimes cremated along with unrelated adults. “Deeply shocking” was Dame Angiolini’s verdict and she condemned the managers of the crematorium for being out of touch with scientific opinion and best practice.

As I write, talks are taking place to try to head off yet more strikes and disruption on our trains.  There’s been a series of one-day strikes by members of the RMT rail union over Scotrail’s decision to phase out high-paid guards on long distance trains and replace them with low-paid ticket collectors. One of the noticeable differences between a guard and a ticket collector is that a guard is in charge of opening the doors. On short-journey commuter trains, this is done by the driver but the union maintains that on long-journey trains, guards are needed to ensure the safety of passengers.  If there was a referendum on this, I just don’t know which way I would vote.

And just to prove there is a chance of a second referendum, Muirfield Golf Club is to vote again on whether women can be admitted as members.  You may remember it was only weeks ago that the gentlemen voted by 64 per cent to accept lady members but it wasn’t enough to reach the required two-thirds majority.  However, under threat of losing their chance of staging the Open Championship ever again, the Muirfield committee have decided to hold another ballot.

Perhaps we should all learn the Muirfield lesson…never be afraid to hold a second referendum but make sure you wait until there’s a two-thirds majority for the answer you want.