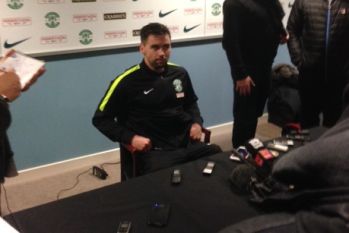 Hibs’ defender Darren McGregor was happy with the team’s performance against Edinburgh City last night and he is feeling positive ahead of next week’s European tie against Brondby at Easter Road.

The popular defender, who opened the scoring on the night enjoyed the experience, particularly parading the Scottish Cup to the travelling supporters.

He also revealed that he has passed on some of his experience to youngsters Alex Harris and Sam Stanton and he insists that both could play a part in the forthcoming campaign.

Speaking after the game to Hibs TV, Darren said: “I feel good after that. I think these games are set up to give you minutes and they are set up to test you – coming to stadiums like this is not easy.

“They set up in a defensive formation, but I think we handled it well. We scored six goals and pleased the travelling support and it was good to parade the cup in front of them as well.

“I’ve spoken to Alex Harris and Sam Stanton individually and I’ve seen it before with Barry McKay at rangers when he was in and out of the team and it just takes the gaffer to take them under his wing. they can be massive assets to us and they tick all the boxes. they are intelligent players and very good on the ball.

“The manager has been no nonsense in training. He is a born winner and he has all the boys onside. He wont take second best and you respect him due to his playing and management career. there will be no stone unturned when he is at the front of the queue.

“Europe is an added bonus from winning the Scottish Cup which was unbelievable but we still want to do well in the competition. Brondby are a massive club and have players on £20,000 per week although money doesn’t always equate to quality but we know they will be a good outfit, but it’s a test for us.

“We know that we have players that can hurt teams at any level and we will enjoy it and hopefully get through.”