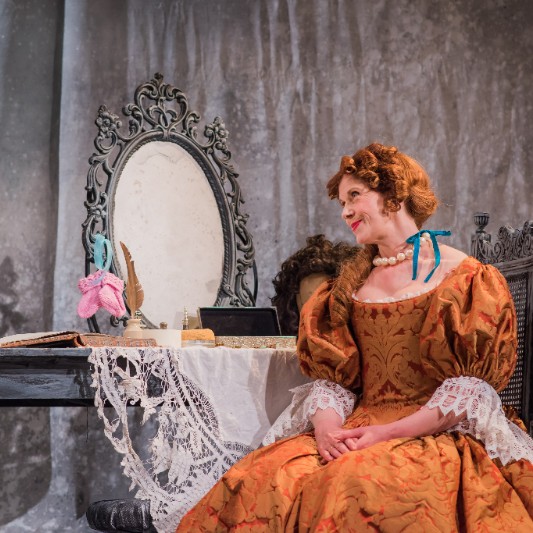 Thon Man Molière by Liz Lochhead at The Royal Lyceum

‘or whit got him intae all that bother…’ This salaciously delicious, self referencing farce, delivered in contemporary Scots dialect with occasional robust vernacular, is a play woven within Moliere’s own plays as works in progress or lack of.

Often proscribed, they were venal satires of intuitional hypocrisy thinly disguised as foppish King Louis’ Court comedies of error and manners. Molière ever the niggling gadfly in the ointment. Tragedy may eventually have the last laugh but at the expense of tripping over its own hubris.

To win the patronage of the King meant sink or swim and thon man Molière is Hell bent on causing himself and others a tsunami of grief in the process.

Director, Tony Cowrie clearly delights in taken as much lascivious licence as he can with Liz Lochhead’s’ script, itself loosely based on Mikhail Bulgakov’s 1932 hommage to thon man himself. Appropriately enough also banned as subversive by the Soviets.

Fading, frustrated beauty, Madeleine Béjart, (the sizzlingly authoritive Siobhan Redmond) actor and Theatre Company manager, is adamant that her teenage daughter, Mathurine ( a giddily convincing Leigh Simpson) will never set foot on the stage. Mathurine has another opinion on that.

Jimmy Chisholm’s superb Molière, known as Poquè, is a grotesque conundrum of near genius seething wit, preposterous self-aggrandisement and highly dubious fidelity. Madeleine once had a flame for Poquè which still casts ominous shadows of doubt.

The lofty Baroque stage is economic in its settings, Designer, Neil Murray, evoking a mixture of slightly neglected Neopolitan splendour augmented by enormous tumbled painted cherubs and seraphim as if struggling to escape from some Piranesi classical ruin. Characters in role, in tears of woe or joy, often both, come and go in a constant flurry of scandalised need to gossip about others outrageous doings.

For Nicola Roy as Therese Du Parc this has become an art form refined, exquisite as a Faberge egg stuffed with maggots. Through all this the only guiding compass of stability and reason is the ever stalwart Toinette (Molly Innes) Madeleine’s maid and homespun philosopher. Her inevitable take on the ever increasing chaos descending upon the Company preceeds with the modest disclaimer, ‘Well, I’m not the one to say it out loud, but…’ or variations on same.

A more somber and melancholy air of ambivalent morality pervades Act 2. Molièr’s marriage to still sixteen year old Mathurine gives rise to rumours of such scandalous suggestion that Madeleine confronts his paternal denial of their new born baby, Loius. Who is Mathurine’s true father? The supporting ensemble cast of  vainglorious talent-lite fops provide rumbustuous distractions as their conceits and follies are portrayed in agonising love-tussled  tantrums and front of curtain luvvie limelight mime.