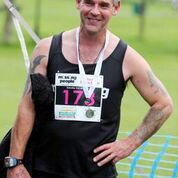 Nearly four years after the tragic abduction and murder of five year old schoolgirl April Jones, her father Paul is joining a team taking on a gruelling 500 mile cycle ride from Edinburgh to London to raise vital funds for national charity Missing People. Paul, who is registered blind, will complete the challenge on a tandem, adding an extra challenge to his journey.

Paul, his tandem partner Adam Doughty and a team of cyclists will be sent off from Arthur’s Seat on Saturday 18 June by Missing People Chief Executive Jo Youle and Hazel Johnstone from People’s Postcode Lottery, whose players have generously supported the charity since 2008. The day’s route will take them through the stunning scenery of the Lammermuir Hills before arriving in Newcastle on Saturday evening. The team is due to finish at the Tower of London on Wednesday 22 June.

Paul’s decision to take on the challenge this year follows his involvement in the charity’s flagship running event ‘Miles for Missing People’ in May 2015. Paul and his wife Coral helped the charity launch the national Child Rescue Alert system in 2014. They have been instrumental in growing the number of people signed up to the system, which issues urgent appeals for high risk missing children to the general public, to over 350,000 people. Paul said: “In 2012 my beautiful daughter April went missing at the age of five. Despite huge support from the police and the public, our search ended in tragedy. Missing People provided us with support during this time, and I would like to raise funds to ensure that many more families receive this vital support. Last year I ran the charity’s annual 10k run ‘Miles for Missing People’, but this year I wanted to set the bar even higher, and ride 500 miles in five days. I’m taking on this epic cycle challenge next month to raise funds for the charity so their helpline can continue to support families like mine.”

Clare Cook, Head of Campaigns at the charity Missing People and who will be joining Paul on the cycle challenge, said “We are hugely grateful to Paul Jones for taking on this incredible challenge cycling from Edinburgh to London to help missing people and their families across the UK. Paul and his wife Coral have really gone the extra mile to support the charity in recent years and in particular through their lead role in launching the national Child Rescue Alert system. Everyone at the charity continues to be overwhelmed by the dedication and energy shown by Paul and Coral in their support of the charity and their recognition of the important role we play when a family is going through the devastation of having a missing loved one”.

To donate to Paul Jones’ Cycle Challenge visit www.justgiving.com/Paul-Jones116. Paul Jones’ tandem has been generously leant by Charlotte’s Tandems, which offers tandems at no cost to people with disabilities or additional needs.