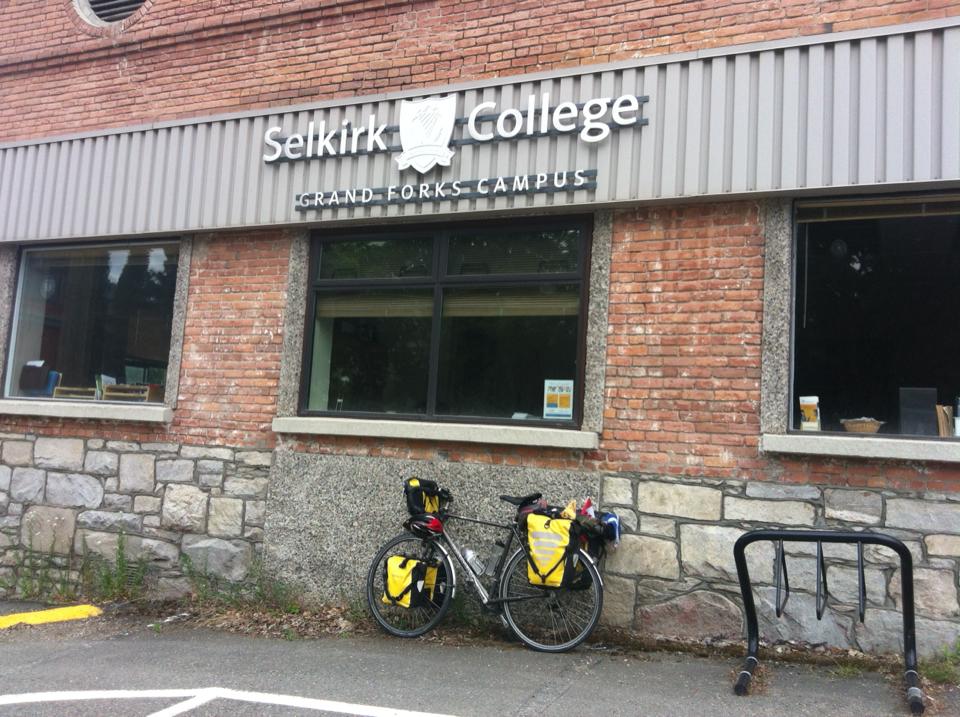 Andrew Dickson’s Canadian adventure continues although it almost turned into an American adventure, and apparently he has been seen at Selkirk College?

So far he has encountered ospreys, bald-eagles and small critters but as yet no bears, and as always he has been delighted with the generosity of people he has met along the way. Andrew’s chosen charities are: The Craig Gowans Memorial Fund, Fighting Against Cancer Edinburgh, FACE and the Sick Kids Friends Foundation.

Rather than me trying to explain, here is Andrew’s story in his own words:

“it was a lovely drop down from Spotted Lake into Osoyoos and lake of the same name. The climb up the other side is probably the longest yet. Not the highest but feels like the longest. A few zigzags up to Anarchist Mountain viewpoint. From here the view is down on the town and lake. Somewhere down below, the Canada/USA border running east/west crosses the lake.

“I Camped a few kilometres up from the viewpoint and reached the Anarchist Pass summit this morning. Again no walking required so things are going OK.

“There is nothing better than small town diners in both Canada and the US. They provide great wholesome food, are friendly and generally have loads of character. Prefect example is Rock Creek, ‘Trading Post’ where I had lunch yesterday. Lovely old wooden building, Amber and Mel were both really nice, the grill excellent, unlimited great coffee and lots of locals coming in for a chat. And all for under 10 C dollars. Wonderful.

“I met Karen Kim and Bonnie in Midway when I asked for directions to the Canada/USA border. Kim, if you can cycle from Midway to Greenwood, you can go cycle touring. It’s grea”.

“I got the photos of the border OK but received a very polite, one sentence telling-off at the Canadian border post, as I’d apparently stepped into the US to take a couple of the snaps. I’ve not to do it again. “Sorry guys”.

“The ‘Greenwood – Voted World’s Best Tasting Water’ made me smile. Obviously there wasn’t any Scottish water in the tastings.

“I ppent Tuesday night at the free campground in Greenwood. It has shelters, picnic tables, toilets and a shop right next door. For me, who usually camps in the woods, this was like the Ritz hotel. Didn’t have to use the tent and there are mama, papa and baby bear sized picnic tables!!!!

“I called in at Selkirk College to ask about name. Possibly connected to the mountain range I’m about to cycle through. Jennifer, who has visited Huntly (Scotland) several times and has friends in Newton Mearns is on the case and will let me know if there’s a Selkirk in the Borders connection.

“I cycled through Christina Lake before reaching the Bonanza Pass weather sign. Think this is more to do with winding-up cyclists like myself. It was a wonderful climb, following the gradual descent of the stream to my right side. The views from the Paulson Bridge were superb.

“I camped just off Hwy 3 on Paulson Detour Road a few kilometres before reaching Paulson Pass summit. Some little rodent had a feast on my bakery stuff overnight. Forget about bears, it’s the little things that get you!!!!!

“Only on the road a matter of minutes when I met Jesper and colleagues who we’re doing forest restoration work. “Jesper, thanks for your generous donation. It’s really appreciated and will be put to good use.

“Near the Paulson (Bonanza) Pass summit (1535m) the views are dominated by Old Glory mountain at 2345m. The view across Nancy Greene lake with Old Glory in the background is a little special.

“Another town, so another great little diner in Castlegar. Dawn’s Early Rising Sunshine Cafe lived up to expectations. And they’re playing Meatloat. What more can I ask, pure uphill cycling music. “Castlegar is at the confluence of the Columbia and Kootenay Rivers. Took Highway 3A which follows the Kootenay. Cycled by the ‘Brilliant’ suspension bridge, dam and hydro plant just outside town. There are several other hydro plants along the river including South Slocen, Kootenay Canal, Bonnington Falls and the very Scottish sounding Corra Linn.

“I camped at Taghum Beach Park on the banks of the Kootenay, just before Nelson. Perfect and no mosquitoes and then cycled through the Selkirk Mountains and strangely enough it’s pretty flat. Or to be more precise Highway 3A has been flat, unlike Selkirk in the Borders where every road goes up!!!!

“Many thanks to Roger Fontaine & Katie Weir in Nelson for buying me coffee and providing really good cycling advice. “Roger, I took the quiet 6 Mile Road and Lower Wynndel Road and both were great. Many thanks again”.

“Highway 3 crosses the old metal bridge at Nelson and then runs beside Kootenay Lake to Balfour where the Osprey 2000 ferry has to be used. This is acknowledged as the longest free ferry in North America. It is fabulous. The views are breathtaking. It’s so good I took 3 sailings. And there were 3 ospreys nesting at the Kooteney Bay terminus.

“Taking off and landing at Crawford Bay runway must be a little special.

“I cycled south on Highway 3 beside Kootenay Lake and camped at Blue Point just north of Sanca. What can I say about the views. Shame about the mosquitoes.

“Saturday breakfast with same view as Friday evening’s beans. The mosquitoes were gone but a bald eagle came and checked me out. First one I’ve seen this trip.

“I spoke to Vern and Dorothy Shippy who provided some great information about the local topography, wildlife and time zones.

“I left Highway 3A and took Lower Wynndel Road into Creston which saved a long climb. Encountered the steepest climb so far in Canyon Street. It’s only a few 100m but it required lots of full, side to side, zig zags to avoid walking.

“Paul Wetzel and Tom Nostrant are the first cycle tourists I’ve met so far. Both built their bikes from scratch, including the frames. Paul is 67, so I’ve a few cycling years left.

“Shortly after, I met Kadim who is nearing the end of a 4000 mile cycle from New York to Vancouver then camped just east of Yahk. Didn’t have Friday night’s view but is was in woodland, so was fine.

“Thanks for all your messages of encouragement. They are really appreciated. Please accept my apologies for not sending replies but time is a bit of a constraint and my single typing finger isn’t very proficient and is a poor speller. I do try to remember to hit the ‘Liked’ button if the message is via Facebook or send a one or two word reply if it’s emails.”