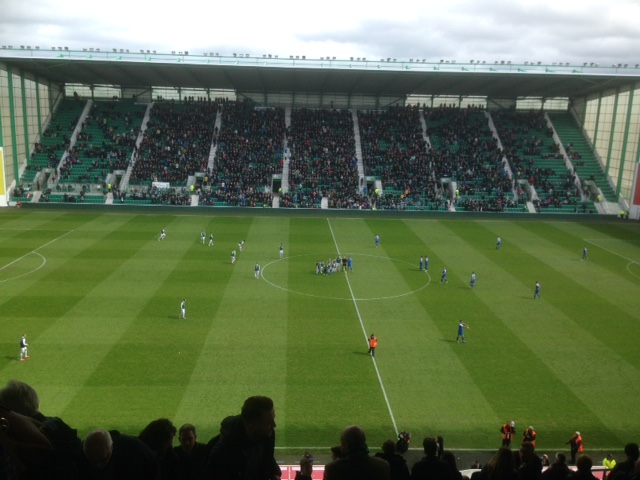 Hibs missed out on second place in the Championship by the narrowest of margins after beating Queen of the South 2-0 at Easter Road this afternoon and they now travel to Kirkcaldy on Wednesday to face Raith Rovers in the first leg of the Play Off quarter finals.

Head Coach Alan Stubbs made one change to the starting XI that beat Dumbarton 4-0 on Tuesday with Liam Fontaine returning to the centre of the defence in place of Darren McGregor. ‘Cult hero’ Conrad Logan retained his place in goal  whilst ‘hat trick hero’ James Keating was selected in preference to top scorer Jason Cummings who joined Oxley, McGregor and long term injury victim Dylan McGeouch on the bench.

Hibs started well and almost took the lead in the 4th minute when Anthony Stokes cut in from the left and fired a powerful strike which was parried by James Atkinson. Keatings was first to react but he was unable to get any power in his header which was held by the keeper.

Lewis Stevenson played a one-two with Stokes before cutting into the box but his shot flew well over the bar.

Former Hearts’ player Gary Oliver almost opened the scoring against the run of play but his effort from the edge of the area went well over.

Hibs continued to dominate possession, stringing numerous passes together without creating any clear cut chances and there appeared to be a lack of urgency their  play considering the circumstances.

Hibs should have scored in the 50th minute when Henderson found Keatings on the penalty spot but his shot was deflected inches post the post.

Moments later the news came through that Falkirk had taken the lead just as Queens were reduced to 10 men when Mark Millar scythed down McGinn who was breaking clear.

In the 55th minute Martin Boyle shot from the edge of the area and Henderson flicked the ball just past the post.

Andy Murdoch was luck to escape with a yellow card for holding back McGinn then aiming a kick at him but the referee decided yellow was sufficient.

Cummings replaced Fraser Fyvie as Hibs looked to grab a goal and the youngster was unlucky when his flick from a Stokes cross was cleared.

Hibs eventually took the lead in the 66th minute when Henderson broke clear down the left and his low cross was bundled into the net by Niklas Gunnarsson.

It was one way traffic from this point and both Stokes and Cummings had shots saved by Atkinson.

On 70 minutes McGeouch replaced Henderson and quickly set up McGinn but the player of the year contender was unable to get his shot away.

Hibs grabbed a second with 12 minutes remaining when Cummings headed home a Boyle cross, giving the fans some hope however it was not to be.

A Stevenson cross just evaded Cummings and Stokes and a break away move ended with a Stevenson strike which went just over.

In time added on, Atkinson did well to hold a powerful 30yard strike from Stokes and the game ended 2-0.

The news filtered through from Falkirk that the Bairns had held on to win 1-0 this taking second place and it was a subdued bunch of supporters to left Easter Road.

After the game Stubbs said: “They certainly had a go. we’ve got three points but it wasn’t enough in the end so we are playing two extra games. we could have scored four but Falkirk could have pushed for a second.

“We go into Wednesday and Saturday in good form and this is a really exciting period. We have seven cup finals to play and I’m really looking forward to it.