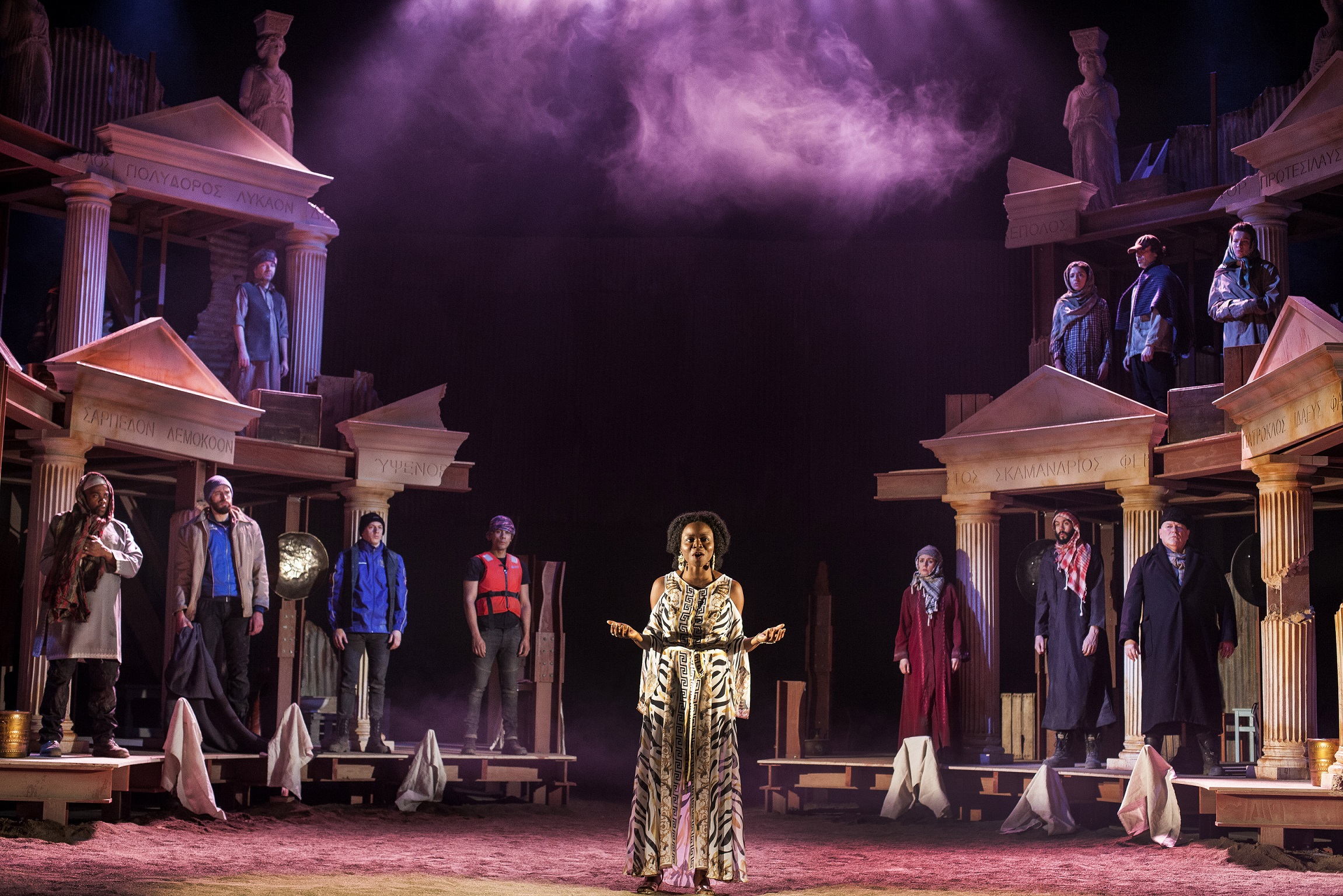 “… There is the heat of Love, the pulsing rush of longing, the lover’s whisper, irresistible – magic to make the sanest man go mad.” For a long ten years the Greeks assail the impregnable walls of mighty Troy, all for the capricious whim of gadfly beauty Helen (Amiera Darwish) and her fey lover Prince Paris (Peter Bray).

Even Paris’s father, King Priam (stalwart as ever, Ron Donachie) shamed by his son hiding behind his mother, Hecuba’s (Jennifer Black) skirts, would rather be rid of him. The audience are with Priam on that one. Bring on the flexing pecs man-butcher Achilles (Ben Turner) chop-chop. Just imagine, a deluded wimp being a catalyst for war? Playwright, Chris Hannan is tickling us here.

Wisely, Helen keeps her head down because she is not at all popular with the siege-starved Trojan women. Euripides will have more to elaborate on the consequences of that in another play. Pretty bimbo in limbo, it is left to more forceful female protagonists to sing for the sisters.

Already, nine years of carnage have witnessed Greeks and Trojans slaughter each other in reasonably equal measure, aided and abetted by the gods as it takes their fancy. One final surge from the Greeks might tilt the balance but alas, the demi-immortal Achilles is sulking in his tent after a spoils of war spat with King Agamemnon (also Ron Donachie, – this can get confusing!). Inevitably, though the irony escapes their brawn ladened brains, again it is over a woman, the young and beautiful Brisies (Amiera Darwish) whose role Hannan enhances as both sex trophy and wise, but frustrated peacemaker.

A dilemma arises in that the two act narrative thrust focuses on a shallow, ego-centric, bisexual mummy’s boy with a death wish whom it is impossible to respect let alone empathise with. Yes, War dehumanises, War is hell. And Achilles is one hell of a bipolar drama queen. One character neatly describes him as having ‘a battlefield for a mind.’ An additional complication being that his mummy is the goddess Thetis (Melody Grove), who has unresolved birthing issues to deal with. The entwined parallel universe war zones of Mount Olympus and Troy are really not the place to resolve them.

In Act Two we are told there will be no talk of the Trojan Horse. Are we are going to see this Achilles angst meme right to the bitter end? A magnificent stage-set rising to ‘the gods’ and no gate-crashing Horse? It might have elicited at least some comment from another noticeable absentee, Cassandra, she being one of the ‘Beware Greeks bearing gifts’ ‘neigh-sayers’, as it were.

There is much to enjoy with Hannan’s reimagining of the capricious, jealous and often downright psychotic gods. Hera’s (Emanuella Cole) views on cosmic sex-predator, husband Zeus’s (louche lizard, Richard Conlon) infidelities are regularly lambasted with both visceral rage and lusting desperation – sometimes atop set designer, Karen Tennant’s superb, battle-scarred acropolis/temple  edifice or when they are slanging each other off on a bling-soaked beach. She in golden bikini, he in Costa del Crime naïf Bermuda shorts. You get the idea. Sort of The Only Way Is Olympus/Benidorm. Hera’s occasional informal asides to the audience brings some light relief if not least for her robust use of the vernacular.

There are many comings and goings where a sombre Chorus sing in ancient tongues. Paint yourself an earscape of Le Mystere des voix Bulgares meets Hans Zimmer/Lisa Gerrard’s Gladiator theme. Ron Donachie brings gravitas and bewildered rage as he doubles both as Aganemnon, the man of action foil to Achilles’ vacillation and the soon to be emasculated King Priam.

Divers characters provide expositional, recollective narratives, sometimes unnecessarily repetitive where events are more honoured in the breech than the observance. The fight scenes are complimented with symbolic sprinkles of blood cast upon them as might a priest use holy water or incense thurible. Blessed are meek/Greek. Those mercurial gods do revel in their irony.

By the end of act one with the death of Patroclus and the interminable dithering of Achilles at last prompted in to action via a tantrum of sand stomping rage, it was not only the siege weary Greeks who heaved a sigh of relief.

Act Two enjoys the impressive special effects of the river god pleading with Achilles to cease polluting his waters with Trojan dead which is then set aflame for good measure. A touch of magic goes a long way.

Can creation only evolve from chaos, violence its own self consuming catalyst for change? The self-reflexivity of the Ouroborus snake ever consuming its own tail is Greek in origin. A Manichaeist notion to muse over.

Yes, Chris Hannan and Mark Thomson really have marked The Royal Lyceum’s Fiftieth anniversary year with a vengeance. Definitely a play to have a think over…