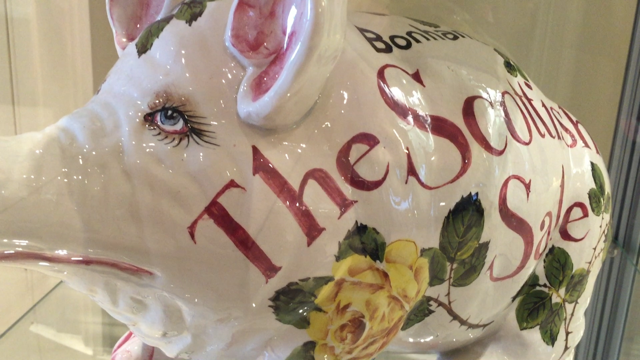 Many lovely things adorn the sale rooms at Bonhams on Queen Street at the moment including exceptional Scottish Colourists paintings, and rather unusually Bonnie Prince Charlie’s cooking pot used at Glenmoriston in 1746. Although this has a plaque on it to say that it had been in royal usage, we were curious about its provenance. We were told it was owned by Alexander MacDonald, one of the Seven Men of Glenmoriston who guarded the prince during his flight after Culloden.

Henry Baggott of Bonhams explained how he really knew that this was the very pot used by the prince. He told The Edinburgh Reporter: “When Prince Charlie was defeated at Culloden, he retreated and managed to escape to Glenmoriston where he was protected by the ‘Seven Men of Glenmoriston’.

“These local patriots looked after him and they hid him in a cave. These men are all identifiable and one of these men owned the pot. It was in his family for many years and went from there into the ownership of the Grant family. It has never been sold before. It has always been in private hands since it was used by Bonnie Prince Charlie.”

Chris Brickley of Bonhams who is Head of Pictures for Bonhams in Scotland told us about the array of pictures which are going under the hammer next week. He said: “You can’t legislate what is in any sale but this time we have a fantastic selection of Colourists. There are several works by S. J. Peploe who is one of Scotland’s best and most collectable artists. We have a classic early still life painted when he came back from Paris when he had been exhibiting influence of other post impressionists like Cezanne and Van Gogh, but very much doing his own thing. He is a very considered, meticulous painter in contrast to Hunter.

“There is also  a fantastic Leslie Hunter, spontaneous still life here which is instinctive and fluid.

“They are very different artists, but both were reintroducing this still life theme, which partly explains why the Colourists are so popular worldwide. They are accessible, modern,  colourful and cheerful.

“Otherwise we have some classic Peploes like Paris Plage from the north of France, Cassis in the warmer south where he went in 1913.  And there is a work featuring Iona Abbey too which is classic theme for Colourists. It is a very important place of spiritual interest in Scotland; all of these are great subjects.”

Bonham expect the painting of Cassis rooftops to sell for somewhere between £80,000 and £120,000. It was painted on a working trip to the South of France which was a favourite spot for the Colourists who were attracted by the light and vivid colours of the area.

Bonhams will be selling about 100 paintings on Tuesday in the Scottish Sale.

We asked Mr Brickley which one he would like to hang on his living room wall. He confessed that the painting of Cassis was the one which attracted his interest most. “It captures the warmth of the south very well.”

There are many other items on sale including a fabulous range of sporrans and a 36-bore pistol which may have been owned by James Boswell and which is expected to fetch about £7,000.  More details about the Bonhams Scottish Sale here.