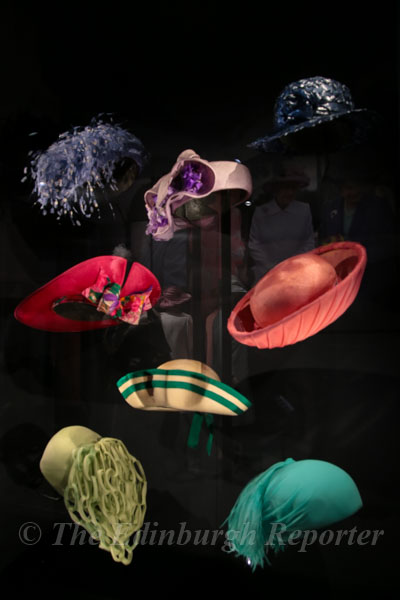 What do you think about when you’re getting dressed in the morning? Maybe you look at the weather? Or perhaps you wonder whether your granny will disapprove of those boots, or your dog clart those white trousers with mud? Chances are you don’t worry too much about whether you can be picked out in a crowd of thousands, nor whether your outfit is diplomatically acceptable to an entire nation. It might matter to you that your suit was made in the UK – but be honest, it probably doesn’t.

For Her Majesty The Queen, however, all these things matter a great deal. Fashioning A Reign, a sumptuous new exhibition at the Palace of Holyroodhous, charts Her Majesty’s formal clothes from childhood to the present day, and shows just how seriously our reigning monarch takes her role as both head of state and ambassador for British industry. Whether welcoming guests to a garden party or touring the Commonwealth on the Royal Yacht Britannia, The Queen is not only always impeccably and elegantly dressed – every part of her wardrobe must also ‘perform’, whether that performance is to send a message to foreign lands or simply to avoid rustling in church; fashion and functionality must come together. The exhibition begins with two charming pink coats, worn by Princesses Elizabeth and Margaret for an official visit to Holyroodhouse in 1937. The matching bonnets are trimmed with pink and white flowers. Such outfits have been carefully preserved because they were for formal occasions; in everyday life, the little girls would have worn the cardigans, skirts and sweaters familiar to many children of the time. Fashioning A Reign focuses particularly on Scottish aspects of the Queen’s wardrobe, so tartan is much in evidence. George IV’s visit to Scotland in 1822 may have kick-started the UK’s interest in Highland dress, but as curator Caroline de Guitant explains, it was Queen Victoria who really made it fashionable – she and Prince Albert began to wear tartan after they had purchased the Balmoral estate; they loved it so much they even dressed their children in it, and although Victoria’s own tartan dress was actually made in France from silk velvet, the exhibition includes a mini kilt in Stewart Dress Tartan made for her son Albert Edward (later King Edward VII) – and a William Ross watercolour, especially commissioned by his mother, of the prince wearing it. Today members of the Royal Family wear a range of different tartans when in Scotland, but Balmoral Tartan, designed by Prince Albert himself, remains private property and can only be worn with The Queen’s permission – and the only person outside the family to get that his Her Majesty’s Royal Piper. Most of the tartan is made up by the Edinburgh firm of Kinloch Anderson; it holds Royal Warrants from The Queen, HRH The Duke of Edinburgh and HRH The Prince of Wales, and first supplied the Royal Family in 1903. Norman Hartnell was couturier to HM The Queen and HM The Queen Mother for many years; he first worked for the then Princess Elizabeth in the 1940s (and made her wedding dress in 1947), and several of his creations can be seen at Holyroodhouse. For a state visit to the USA in 1957, Hartnell created a pale green evening gown with his trademark heavy embellishments of pearl, sequins, beads and diamante; its crinoline shape was popular until the late 1960s, and is seen again in a grey dress worn in Edinburgh for a State Visit by the King of Norway. By contrast, an elegant scarlet velvet dress by fellow warrant holder Hardy Amies may look quite simple, but would have called for complex pleating and folding to create such a beautiful, flowing line. (Seams must be kept to a minimum to ensure successful photographs from any angle). Wherever she goes, The Queen wishes to send out the right messages; a white evening dress decorated with poppies – the state flower of California – worn at a reception and banquet at Twentieth Century Fox in Los Angeles during a visit to President Reagan, serves both a diplomatic purpose and a practical one, its layers of chiffon and organza being designed with the Californian climate in mind. Another white dress, created for The Queen’s State Visit to Thailand in 1972, has a hint of oriental style in its sculpted neckline and golden yellow embroidery; colour is extremely important to the Thai people, and as HM King Bhumibol Adulyadej was born on a Monday his colour is yellow. The panels of rich golden fabric in the skirt and the coordinating jewelled embroidery are also the colours of the Most Illustrious Order of the Royal House of Chakri. Diplomacy reaches its height in the striking black costume worn by The Queen for her 1980 audience with the Pope at the Vatican. Designed by Ian Thomas, who is credited with softening the line of Her Majesty’s clothes after Hartnell’s death in 1979, the black silk velvet and taffeta dress is quite different from anything else on display and incorporates a black mantilla. The Queen is very involved in the production of her formal clothes; designers (who must be British or working in Britain) are required to submit sketches in the first instance, and the exhibition includes a range of these – many reminiscent of the dressmaking patterns you may recall from your own childhood – dating from 1940 to the 1970s. The sketches are returned with amendments and then resubmitted with fabric samples before any decisions are made.

Lewis-born Sandra Murray, who designed the purple coat, green dress and shawl worn by The Queen for the opening of the Scottish Parliament, was so surprised when Her Majesty’s Private Secretary called to invite her to submit sketches that she wondered if she was the victim of an April Fool’s joke. She had little more than two months to complete the outfit, and had four fittings with The Queen over that period.

Purple reflects the Scottish thistle; Murray designed the coat to be slightly longer than usual, feeling that this added to its elegance, and again it was cut all in one piece to avoid seams. The accompanying hat was made by one of Her Majesty’s favourite milliners, Philip Somerville (who at one time made over 50 hats a year for her); the brooch (not seen) by Perth-based silversmith Malcolm Appleby, and the shawl woven on the Isle of Harris. There is, Caroline says, a great deal of collaboration between the various designers who contribute to any ensemble. Caroline has also made films of some of the manufacturers at work so that visitors can see the skills involved. Although Sandra Murray successfully mixed a few colours in her design for The Queen, Her Majesty knows people want to be able to spot her in a crowd. She is famed for her block colours – and for her hats, a variety of which are seen in two cases in the exhibition. The Queen may aim to transcend fashion rather than lead it, but in millinery Her Majesty is perhaps a little more daring – a jaunty straw and silk number worn for a 1993 Commonwealth Heads of Government meeting in Cyprus sports a red brim and floral bow. Another Royal Warrant holder, Simone Mirman, designed a smart straw hat studded with red felt and pearls; although Mirman’s salon was always in London, she had been born in Paris and a certain French chic is evident in her work. Mirman also understood the need for The Queen’s face to be visible; none of her hats have wide brims. Other hats on display are decidedly ‘vintage’ – a fabulous cap covered in huge flowers reminds one of synchronised swimmers in a Hollywood musical, but I’m sure it looked stunning at the time.

As in so many parts of her enigmatic life, The Queen’s choice of formal clothes is driven by her sense of duty, her wish to promote her country, to maintain good diplomatic relations throughout the world, and to give her public what it wants – a glimpse of the most famous woman in the world. Whether Her Majesty actually enjoys wearing these formal outfits no-one can say; perhaps enjoyment is not considered relevant. It must be a bit of a chore sometimes, surely, to have to don another haute couture number for yet another dinner? But on the other hand, how good it must feel to know that no-one else is going to have hit on the same dress – AND that everything is going to fit. Fashioning A Reign: 90 Years of Style from The Queen’s Wardrobe is a delightful exhibition, skilfully curated by Caroline de Guitaut particularly to reflect Scottish aspects of Her Majesty’s long life. It is at the Palace of Holyroodhouse until 16th October 2016 and entry is included in the general admission ticket price. Two other exhibitions with the same title, but displaying different outfits, are at Windsor Castle (17th September 2016 – January 2017) and Buckingham Palace during the Summer Opening of the State Rooms (23rd July – 2nd October 2016).

With thanks to Caroline de Guitaut and Stephanie Cliffe, Royal Collection Trust.