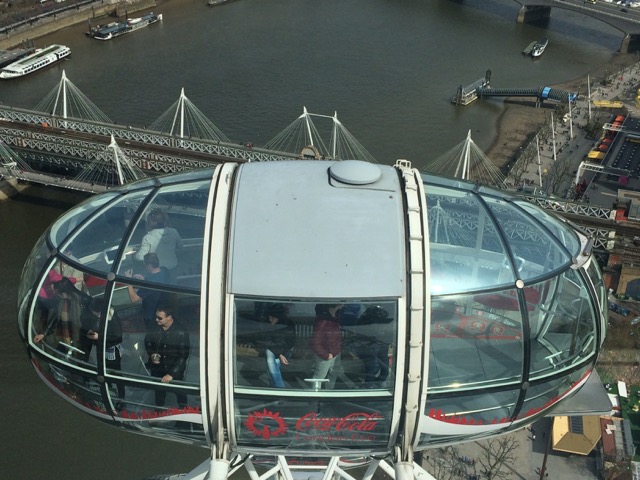 The London Eye has become one of the capital’s favourite attractions. We sent our roving reporter Marion Rivman to have a ride and tell us about it. This was a little more difficult for her than we might have thought…. It is not uncommon for a childhood trauma to leave us with a fear that lasts our entire life. When I was ten, a ride on a Ferris wheel at a county fair went terribly wrong. The shaky wooden gondola I shared with two cousins, got stuck at the very top…for two endless hours! I was scared stiff – remaining still throughout the whole ordeal for fear of falling out. When the mechanics finally got the wheel moving again and I reached land, I vowed that I would NEVER go on a Ferris Wheel again.

After close to six decades. it was time to conquer my fear of Ferris wheels by taking a ride on the mother of all them all, the London Eye. At 135m, it is the world’s largest cantilevered observation wheel. My heart raced just thinking about it.

The London Eye towers over the Thames diagonally across the river from Parliament, Big Ben and Westminster Abbey. The perfect place for a bird’s eye view. It was conceived and designed by Marks Barfield Architects and was launched in 2000. Since its opening at the turn of the century, over 60 million people have taken a ride on the London Eye. All without incident. I was ready to join their ranks.

And yes you can see that I overcame my fear. I rode the London Eye along with my new friends in the pod, enjoying the view and the experience! I may  repeat the experience when I come back to London again…. (No we only need you to be scared once! Ed.) The Eye has won over 85 awards for national and international tourism, outstanding architectural quality and engineering achievement. In fact, it has become the UK’s most popular paid for visitor attraction.

A remarkable feat of design and engineering, the London Eye gives London’s skyline a dramatic new addition and has been offering guests a new perspective on London ever since. Originally, it was intended as a temporary structure, able to be dismantled and transported to a new location, and had planning permission for just five years. But with millions boarding it every year, its popularity has prompted its lease to be extended. Today it is a permanent fixture on the London skyline and a beautiful symbol of modern London.

The London Eye is open from 10:00 till 21.30 every day except Christmas Day. All the details about tickets and prices are on the London Eye website here. There are many options from saver tickets at £21.20 per adult to the whole capsule for up to 25 people with champagne and nibbles for just £769.

Here are some Frequently Asked Questions:

1.When was the Eye built?

2. How many people ride each year?

Over 60 million people have ridden the London Eye since it opened in 2000. The London Eye receives more visitors annually than ancient wonders of the world like the Taj Mahal, Stonehenge and even the Great Pyramids of Giza.

3. What percentage of riders are local? Tourists?

The London Eye is very popular with guests both from within the UK and London, and abroad.

4. How often is it shut down for maintenance?

The London Eye has constant overnight maintenance to ensure she is running smoothly – we also close the Eye for two weeks in January every year for larger scale maintenance such as upgrading our lighting system.