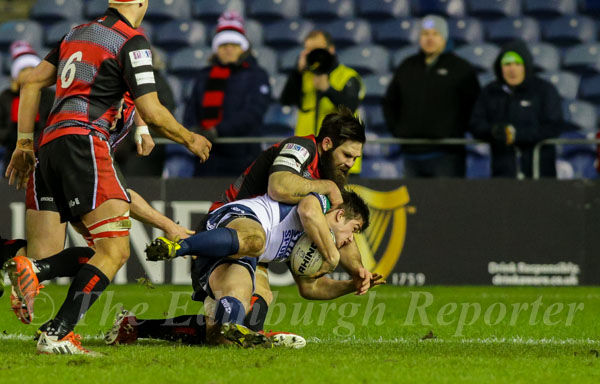 Connacht arrived at BT Murrayfield with a clear points advantage at the top of the Guinness PRO12 League – and left with a six point lead over Leinster. Leinster, however, have two games in hand to try to take the top spot. Edinburgh, in fifth, are only a couple of points clear of the chasing pack, but have played two or three more matches.

The first half of the match was mostly played in Edinburgh’s territory, with the home side seeing little, if any, attacking ball. Centre, Craig Ronaldson, hit the post with a fifth minute penalty and that set the tone for the remainder. For the first 20 minutes, Connacht easily dominated and, on the few occasions the home side, broke out, the visitors quickly won the ball back and resumed their attacking play.

With the writing on the wall, Connacht scored their first try with 21 minutes on the clock. Encamped on Edinburgh’s five metre line, a scrum gives them good possession and, following a couple of mid-field rucks, No. 10 AJ MacGinty, blasted through Cornell du Preez to score the opener. Ronaldson then slotted home the conversion for a 7-0 lead.

Edinburgh saw a bit more of Connacht’s half over the next period of play, but, once again, they were dispossessed and another attacking move went the length of the field and, in the 31st minute, wing, Danie Poolman, crossed the line in the corner, but the TMO scrutiny which followed, deemed that the ball ahd been dropped, so the referee took play back for a penalty to Connacht.

From the restart, the visitors set up a driving maul and, hauling this to the ground, lead to Anton Bressler seeing yellow. Another maul followed from the penalty and flanker, Jake Heenan, broke clear on the line and went over for the second try. Ronaldson converted again for the points and a 14-0 lead, with less than 10 minutes to play to the break.

The lack of Bressler seemed to put a bit of fire into the home side and, Edinburgh were able to play where they should have been – deep in Connacht’s half. Damien Hoyland made a break down the right, and the ball was quickly moved across the pitch to the other side where, flanker, Jamie Ritchie had a stab at the try line, but was tackled a metre, or so, short. Connacht then turned the ball over and cleared to touch, but the home side were soon back on the offensive with Connacht having to put in several last ditch tackles. The half ended with a penalty to Edinburgh on the left touchline, but No. 9, Sam Hidalgo-Clyne was unable to convert and the sides went in 14-0 to the Irishmen.

Edinburgh started the second half where they left off, and early breaks from Hoyland down the wing and centre Chris Dean, put the home side in a good position for their first try. Quick recycle ball from near the left touchline was passed to Hoyland in the centre. The wing then put in a huge looping pass from the middle of the field out to the right hand five metre line for Chris Dean to run onto and slide gracefully over in the corner. The TMO was consulted again to look at the pass, but all was OK and the try awarded. Hidalgo-Clyne’s kick went wide so the score stayed at 14-5.

Connacht soon got back on the horse and, within two minutes of the restart, they were up in Edinburgh’s five metre zone again and, collecting the ball at the back of a collapsed ruck, No. 13, Bundee Aki just stepped over the bodies unopposed and dived over behind the posts to open the gap further., and with Ronaldson’s conversion going over, it was out to a 16 point lead at 21-5.

The next five minutes of play, then swung back in favour of Edinburgh. Returning a clearance kick, the home side went into overdrive and hammered away at the visitor’s defence. And then, in the 52nd minute, a virtual repeat of the play leading to first home try, lead to the second. From a right field ruck, the ball came out to stand-off, Phil Burleigh, who shipped the ball on to Hoyland. He had a little more work to do than Dean, but the end result was the same, try in the right corner. Hidalgo-Clyne then found the posts with the conversion to make the score 21-12. Play then swung back in favour of Connacht, but their assault failed with a penalty being awarded to Edinburgh deep in their 22. Then it was back to the other end again. Another series of rucks and line breaks left play over on the left of the pitch again, but this time, du Preez kept the ball their and barrelled over in the corner for another TMO scrutinised try. Another Hidalgo-Clyne miss – the ball ricocheted off the bar – kept the score to 21-17, but things were looking up for Edinburgh.

A 70th minute penalty from Hidalgo-Clyne brought about a one-point game at 21-20, but play soon returned to the home end, and a fine series of attacking runs lead to a Connacht scrum and, with the simplest of plays, No. 20, Eoin McKeon, came off the back of the scrum and barged over under the posts. With MacGinty scoring the conversion, it was back to a two score match at 28-20.

Despite battling away and going to touch for a penalty with couple of minutes to play, rather than posts, Edinburgh had to settle for a final minute penalty which Hidalgo-Clyne saw over for the losing bonus point and a 28-24 final score to Connacht