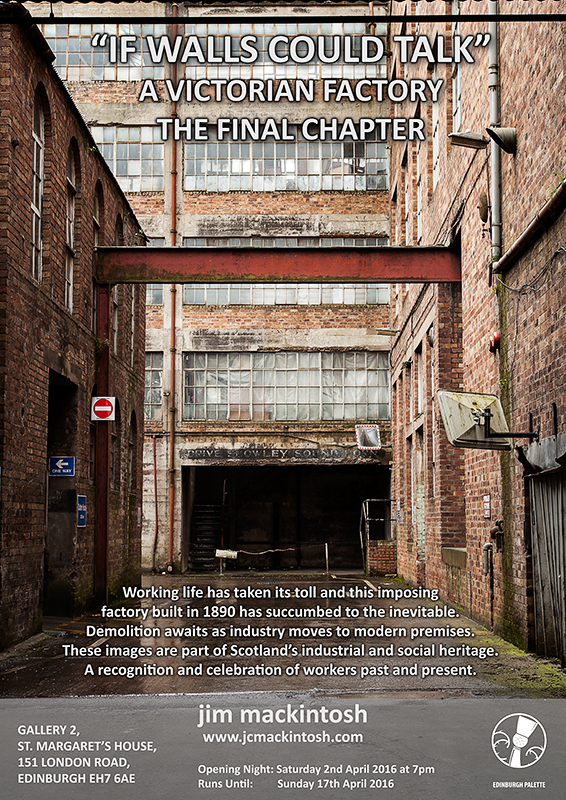 During a visit to Falkland, Fife in 2012 Edinburgh photographer Jim Mackintosh stumbled across the Smith Anderson factory on the Well Brae site and was instantly struck by the scale and power of the buildings.

He knew nothing about the factory or the company but decided there and then that he had to photograph it. That was when fate played her hand. Jim contacted the company and learned that they were due to relocate to modern premises and that the site would eventually be cleared for redevelopment. The company had been considering recording the history of the buildings and so an eight month collaboration began that led to the creation of a fascinating photography documentary.

The series, ‘IF Walls Could Talk” A Victorian Factory – The Final Chapter, is a record of Scotland’s industrial and social heritage. As Jim explained, “The original factory was built in 1890 as part of the linen industry and converted in the 30’s for the production of linoleum. Traces of these important Scottish industries remained in the architecture of the buildings and I realized that I was capturing something of that history as well as the current workforce.

“It was easy to imagine the original workers walking around the building and I suspected their conversations, jokes and fears were just the same as the final Smith Anderson workers.

“I hope that my images are seen as a celebration of all the workers, past and present, that who graced the Well Brae site and that in some way I have been able to tell their story.