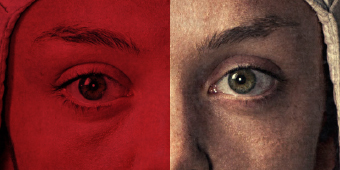 Will America buy in to Donald Trump’s vision of a God-fearing New Jerusalem? (Terms & Conditions apply).

Was the Holy Father’s perceived interference in the Democratic process, albeit the American variety, ill-judged?

‘If you don’t know what it is to be a witch, how can you knowingly deny not being one?’ asks a Salem inquisitor.

The Devil, truly or malfeasant, forever lurks within the detail. With Trump’s conjured Beelzebub hordes hiding beneath sombreros, together with the Oscar/BAFTA nominated film, Trumbo (Dir. Jay Roach, 2015) dramatising the McCarthy ‘witch-hunt’ trials, perhaps this timely revival of The Crucible has a febrile immediacy – Cometh the hour, cometh the man?

In his preface/overture to the play Miller wrote: ‘The witch-hunt was a perverse manifestation of the panic which sets in amongst all classes when the balance began to turn towards greater individual freedom.’

Director John Dove’s ability to encapsulate Miller’s studied dissection of a puritanical community, spiritually and morally spiraling into self-evisceration, has never been more contemporaneous, apposite and foreboding . A London East End idiom for impending mayhem once went: ‘The Devil is home on leave’. The Royal Lyceum’s ensemble seem to be very much at home with that. They have opened the door and made it theirs and Miller’s ‘Scottish Play’.

Dove remains faithful to both text and Miller’s precise stage directions. Sparse set designs and period wardrobe are strongly lit through out. During act transitions there are blackouts, a backdrop primal forest looms, predatory, an insinuating prologue to the impending human calamity.

There are convincing performances throughout, not least, Meghan Tyler’s Abigail Williams. Described by Miller as ‘…a strikingly beautiful girl of seventeen,’ Tyler carries that part effortlessly. Through her ‘…endless capacity for dissembling’ Abigail exalts in her manipulative opportunism.

Ever conscious of her mayfly credibility she distorts insecure passions most likely to ensure her survival, or so she thinks. Kirsty Mackay’s increasingly confident, Mary Warren, invokes a repressed, adolescent strutting with a vulnerable desire for independence. The corpulent bombast of Ron Donachie’s Deputy Governor Danforth, dominates the final Act. Other parts are discharged with equal command.

This production allows for slow-fused exposition where incremental accusations and counter-charges translate from incredulous farce to existential horror. The audience cling to gallows-humour as best they can.

One by one the good, the bad and the ugly of Salem and beyond each assume their parts.

By Act 4, in the claustrophobic, climatic court-room setting, the seven deadly sins, once abstract, now manifest themselves with devastating clarity. Each of the ensemble cast are bewildered, emboldened or subsumed by the vortices of vice and virtue that spiral beyond their control.

It allows the visceral humanity of John Procter’s (Philip Cairns) submission to his own truth to become an epiphany of trusting love that Salem’s soul cried out for.

A must-see show and be damned if you don’t!