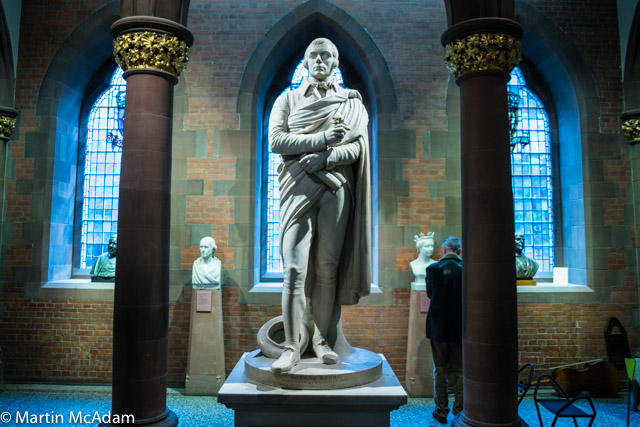 We celebrate our national Bard, Robert Burns each year across the world, but we set out to find out about Burns in Edinburgh today. He is not quite everywhere but is certainly noted! Burns was born on 25 January 1759, and although he was an Ayrshire farmer, he spent some time in the capital selling his poetry and meeting with the aristocracy of the day and other writers.

As well as being lauded inside and outside the Writers’ Museum on Lady Stair’s Close, there is a statue of Robert Burns on Bernard Street in Leith which was adorned with a tartan scarf at the time of our visit.

The Burns Monument on Calton Hill was designed by Thomas Hamilton who also designed the former Royal High School building at the foot of the hill. But the John Flaxman statue inside the monument was moved to the Scottish National Portrait Gallery on Queen Street as it was being affected by smoke from the gasworks below the monument. There is a lovely piece of audio on the Scottish National Portrait Gallery website where Gallery attendant Christopher Wakeling and Duty Manager Willie Dickson talk about their favourite portraits – one of which is the painting of Burns by Nasmyth which hangs on the top floor of the gallery. Mr Dickson said: “My favourite painting in the gallery is by Alexander Nasmyth of Robert Burns. The reason it’s one of my favourites is because I’m a Burns person myself and I’ve used it in the past when running Burns’ Suppers for invitations and of the initial programme. I always found it very striking and when it was put onto cardboard the actual invitations were very impressive.”

Any other mentions of Burns elsewhere in Edinburgh? Do tell us!