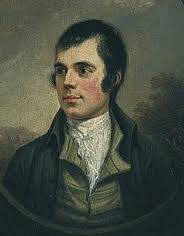 This weekend we Burns fans are given over to “eating haggis and cranachan, toasting the lassies, dancing the Dashing White Sergeant and cavorting,” as the poster advertising my Burns Night puts it. It’s a tradition which seems to be growing and it offers not just a night of fun in the depths of winter but a night of reflection too.

“Oh would some power the giftie gie us, to see oursels as ithers see us.”

If Burns himself were to visit us this weekend he would be amazed at our wealth, our urbanisation, our mechanisation, our communications, our poncy pronunciation, our irreverence, our size and our skimpy clothing. I picture him as a curmudgeonly figure, a mixture of Alastair Gray and Billy Connolly, but  handsome like John Cairney.  He would be appalled at our decline from the nation that led the industrial and scientific revolutions of the 18th century. And he would be angered by our continued inequality.

A report out this week from Oxfam says that the top one per cent of the world’s population own more than the rest put together. Just 62 individuals own half the world’s wealth (all but nine of them are men.)  So much for the proposition that “all men are created equal”.   The latest figures for Scotland show that 14 per cent of the population are living in poverty, half of them in working households.

The Scottish Government was rather taken aback when its own poverty advisor, Oxford economist Naomi Eisenstadt, submitted a report this week saying the council tax freeze should be ended, since it was benefiting the rich rather than the poor.

She also called for more progress on social housing and the introduction of the “living wage” of £8.25 an hour. Scotland’s 32 local councils are proving reluctant to accept the freeze and the government has had to postpone its deadline for funding settlements.

This week’s employment figures look good on the surface, with a record 2.6 million Scots in work, but a third of them are only in part-time work and around 5 per cent are on the minimum wage of £6.70 an hour. There have been warnings too that the economic outlook is grim, warnings from the Chancellor, the Governor of the Bank of England and the Federation of Small Businesses in Scotland.  We are being forced to come to terms with a slow-down in the world economy and a curious fall in the price of our North Sea oil.

It’s been a week of slightly nervous talk of the impending referendum on membership of the European Union. David Cameron is sending mixed signals on his hopes to make a breakthrough next month on his “renegotiation” with Europe and there’s speculation the referendum could follow as soon as June this year.

Nicola Sturgeon urged him to wait till the autumn or later to give him time to convince the sceptical British public that we should stay in the EU. Perhaps too she doesn’t want the referendum campaign to interfere with her triumphant march towards what might be another overwhelming SNP victory in the Scottish elections on May 5th.   But the Tory’s Scottish Secretary David Mundell was having none of this. He was the first cabinet minister to break ranks to hint at a June vote. The Foreign Secretary Philip Hammond, on a visit to Edinburgh, followed suit.

So another R-Day approaches. The opinion polls show that the “Leave” and “Remain” campaigns are running neck and neck in England but around 60 per cent of Scots want to stay in the EU. I’ve always thought referendums are dangerous things. You never know what might happen.

Ross Finnie was familiar to us as the steady-as-we-go Agriculture Minister during the foot-and-mouth cattle crisis in 2007. They called him Captain Mainwaring. He’s now the chairman of the Food Standards Agency and his gravelly voice could be heard this week warning us about consuming too much sugar. Apparently we eat and drink more sugar per stomach here in Scotland than in any other country in Europe and of course it’s bad for our health, and our health service. The experts say we are facing adult obesity levels of 40 per cent in twenty years time if we don’t stop our children consuming so much sugar.  He’s calling for some sort of sugar tax, unless the food and drink industries take measures to reduce the sugar in their products.

On Monday MPs debated a petition to ban billionaire US presidential hopeful Donald Trump from entering Britain because of his call to ban all Muslims from entering the United States. There was no actual vote, though most MPs spoke against Mr Trump but also against a ban. The SNP were divided, Tasmina Ahmed-Sheikh was in favour of banning The Donald, but Corrie Wilson said it would be catastrophic for Turnberry in her constituency since Mr Trump might withdraw his multi-million investment in the resort.

I suggest Mr Trump should spend his money on a space journey to the outer reaches of the Solar System to investigate the wind-power potential on Planet Nine, the huge and mysterious new planet “discovered” by scientists from the University of California. But no doubt his new supporter, former Alaska governor Sarah Palin, will persuade him to moderate his ambitions and his language.

And speaking of Alaska, I wonder if Ms Palin would like to compete in this weekend’s Sled Dog races in the forests around Aviemore. They’ve been held there for over 30 years, snow or no snow. This year 250 “mushers” and a thousand dogs are expected to take part.

In all, it’s a crazy world. As Burns says at the end of his Tale of Twa Dogs – a discussion between two friendly dogs from very different backgrounds on the foibles of their masters, high and low:

“Up they got and shook their lugs

Rejoycin’ they were nae men but dugs.”