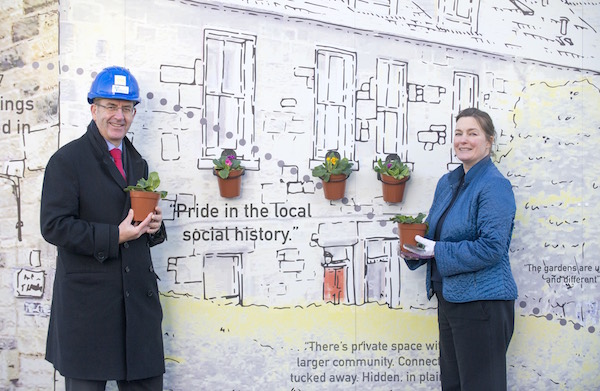 tHe Haymarket development, an Interserve and Tiger Developments project, has joined forces with Dalry Colonies Residents’ Association to create a visual depiction of life past and present in the Dalry Colonies.

Following an extensive creative collaboration process tHe Haymarket and Dalry Colonies have produced hoarding boards that not only reflect the rich heritage of the area but also show how tHe Haymarket is transforming the urban landscape to create an iconic office, leisure and civic space.

The hoardings feature a design that incorporates both the old and new of the area and includes historical and social history facts amongst direct quotes from residents and plant pots which will be used by residents to plant herbs and flowers.

A community notice board has also been included in the design, a suggestion made at the community workshop held between tHe Haymarket and Dalry Colonies Residents, to allow the local community and tHe Haymarket development team to share updates and news.

Commenting on the collaboration and the new site hoardings, David Westwater from tHe Haymarket said: “The newly installed hoardings represent the history of the colonies, from their inception due to the need of affordable housing to becoming part of the growing community of Haymarket.

“We have been hugely impressed with the proactive way in which the Dalry Colonies Residents’ Association have engaged with the development team through this process and we are more than happy with the final outcome – both the support from the residents and the brilliantly designed hoardings.”

Barbie Lyon, Dalry Colonies Residents’ Association added: “The Dalry Colonies are nearly 150 years old and the area, including the old Haymarket Goods Yard, has a rich heritage. As residents, we enjoy keeping the social history of the area alive. It was very enjoyable to work with tHe Haymarket team to create something visually different and informative for the hoardings. We are keen to continue to work with tHe Haymarket team as the project continues to develop, creating a new era for the area.”