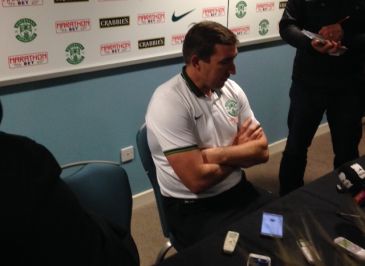 Hibs have lodged an appeal against the red card shown to midfield star John McGinn during Saturday’s Championship match against Falkirk at Easter Road.

Referee Kevin Clancy had already waved away two penalty claims in a first half totally dominated by Hibs before he sent the Scotland Under 21 captain off following a challenge on Mark Kerr.

McGinn had picked up the ball outside the area and looked to be impeded by two Falkirk defenders before he lost possession and lunged at Kerr in an effort to win back the ball.

The decision  earned him a chorus of boos from three sides of the stadium as he left the field at both half time and full time.

Head Coach Alan Stubbs said after the game: “He’s just overstretched for it, you’ve seen him do that and win the ball and I’ve got to say when you look back, it is malicious? Not at all.

“Has he caught him? Yes he has. but you could easily have seen a yellow card given.”

The appeal will be heard on Thursday.