Oh yes it can – and there you were thinking it was all about books. And you’d be right of course – it is, very much so – but this year the Scottish Book Trust is looking at writing from all angles, with events for everyone from traditional readers (me..) to those who like their entertainment a little edgier. Ranked as The 46th Hottest Man in Scotland by The Daily Record in 2008 (make of that what you will…), Alan Bissett is a male author, who wrote and performed a one woman show. He sprang onto the Scottish literary scene in 2001 with the zeitgeist-busting Boyracers, a Scottish novel about being young, naive, and getting taken on a sinister adventure. Later novels include Death of a Ladies Man, and Pack Men – a novel which, in the words of The Guardian, ‘casts an unsparing eye over the sectarian pollution of Scottish society.’

Bissett, who is originally from Falkirk, is also a performer and a former teacher of Creative Writing at Leeds and Glasgow Universities; he works extensively with schools, especially senior secondary age pupils. His play The Pure, The Dead and The Brilliant, was endorsed by fellow author Irvine Welsh – in spite of Alan’s assertion in Death of a Ladies Man that ‘trainspotting was wrong.’ Bissett is a contemporary Scottish writer and a chronicler of one of the most exciting times in Scottish History, the 2014 Scottish Referendum. He once tried to read War and Peace, but the internet got in the way.

This event forms part of the Pentlands Book Festival and will take place at Currie Library, 210 Lanark Road West, at 3.30pm on Thursday 26th November 2015. It’s free, but as capacity is limited to 50 people you do need to book, and you can do so via eventbrite here.

See Jonathan Glazer’s gloriously cinematic interpretation of Michel Faber’s brilliant novel and hear the author discuss the experience of having his work adapted for the big screen. A beautiful woman (Scarlett Johansson) drives a white van along Scotland’s lonely back roads. Her identity and her motives unclear, her eyes deadened but alert, she prowls the night streets seeking male victims. ‘An intoxicating marvel, strange and sublime’ (Time Out), ‘Wonderful, grisly and beyond bonkers’ (David Mitchell).

The Q & A session after this special screening will be hosted by Dr Jonny Murray, Senior Lecturer in Film and Visual Culture, Edinburgh College of Art.

Make Your Own Mini-Comic with Metaphrog

A fun workshop with award-winning graphic novelists Metaphrog (John Chalmers and Sandra Marrs), who are coming to Craigmillar Library ahead of a US tour promoting their new book, The Red Shoes. John and Sandra have been developing comics and graphic novels together for over 20 years. Their workshop is aimed at children aged 8+ and their families – you get to make and take home your own mini comic, and ten free copies of The Red Shoes will be given away on the day to lucky young artists.

The workshop will be held from 2pm to 3.30pm on Saturday 28th November 2015 at Craigmillar Library, 101 Niddrie Mains Road. No need to book for this free event, just come along to the library on the day.

Cathy Rentzenbrink: For the Love of Reading

Author Cathy Rentzenbrink is a Project Director at Quick Reads, the Reading Agency’s ongoing project to encourage adults new to reading. She is particularly pleased to be doing this because her Dad used to struggle with reading and is now a massive reader, so she has first hand experience of both the causes and effects of low literacy, and also of the huge pleasure that becoming a reader can bring.

Cathy is also Contributing Editor at The Bookseller and speaks and writes regularly on literacy, literature and everything in between, on TV, radio and in print. Cathy will talk about her work with Quick Reads, and will also read extracts from her bestselling family memoir, The Last Act of Love, about which no less than Matt Haig said; ‘This is a brilliant book. Harrowing and heartbreaking, but also warm and human and healing. It is about a rare kind of tragedy, but feels universal, as it is about love and loss and how we learn to live in the face of what life throws at us’.

Cathy will be at Wester Hailes Library, 1 West Side Plaza, at 2pm on Friday 27th November 2015. This event is free but booking is required and made by made via eventbrite here. Ronnie was one half of The Corries, the popular folk duo who made famous the unofficial Scottish national anthem, Flower of Scotland, written by the other Corrie, the late Roy Williamson. One of the most popular and best known performers in Scotland, Ronnie has travelled and performed throughout the world and made many records both with The Corries and in his own right; he is also an accomplished artist. Ronnie will talk about his recently published autobiography ‘That guy fae the Corries’, a memoir featuring his wartime childhood, austerity Britain in the 1950s and 60s, and his amazing musical career. Ronnie’s account of his life is both funny and fascinating – a truly incredible folk tale.

Ronnie will be at the Central Library, George IV Bridge at 2.30pm on Saturday 28th November 2015. Free tickets may be booked via eventbrite here.

This is just a taster – there are lots more events on in Edinburgh, from poetry to Peter Pan in Pictures, a Teddy Bears’ Sleepover and a chance to pitch your own book to agents and publishers. You can see the full programme on the Scottish Book Trust’s website here.

‘But what about retro-futurism, technological fetish and Fence Records?’ I hear you cry… no, I wasn’t making it up –

Another Minimalism is the Fruitmarket Gallery’s current exhibition, bringing the work of a select group of current-generation artists together with that of two pioneers of West Coast American minimalism,; it runs until 21st February 2016. At 7.30pm on Saturday 28th November the Gallery will host Space and Lit with the aforementioned Michel Faber; think California Light and Space art, The Book of Strange New Things, and the modular synths and tape delays of Found’s post-cataclysmic world. Refreshments and stimulation from caffeinated art collective CONCH.

Tickets cost £6 and are available via eventbrite here.

Meanwhile at 7.30pm on Friday 27th November in Summerhall’s Library Cafe, Faber Social and Book Week Scotland present For the Record, a night of storytelling, performance and the secrets of the Scottish music scene with Fence Records and Fife’s finest, James Yorkston, music journalist and radio DJ, Vic Galloway and Richard King, acclaimed writer of How Soon Is Now? and Original Rockers.

Richard and James will kick things off, the trio will then talk about the history and legacy of Fence Records and James will finish the evening with a solo set.

I told you there was something for everyone. 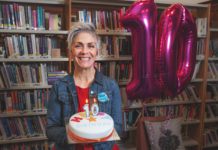