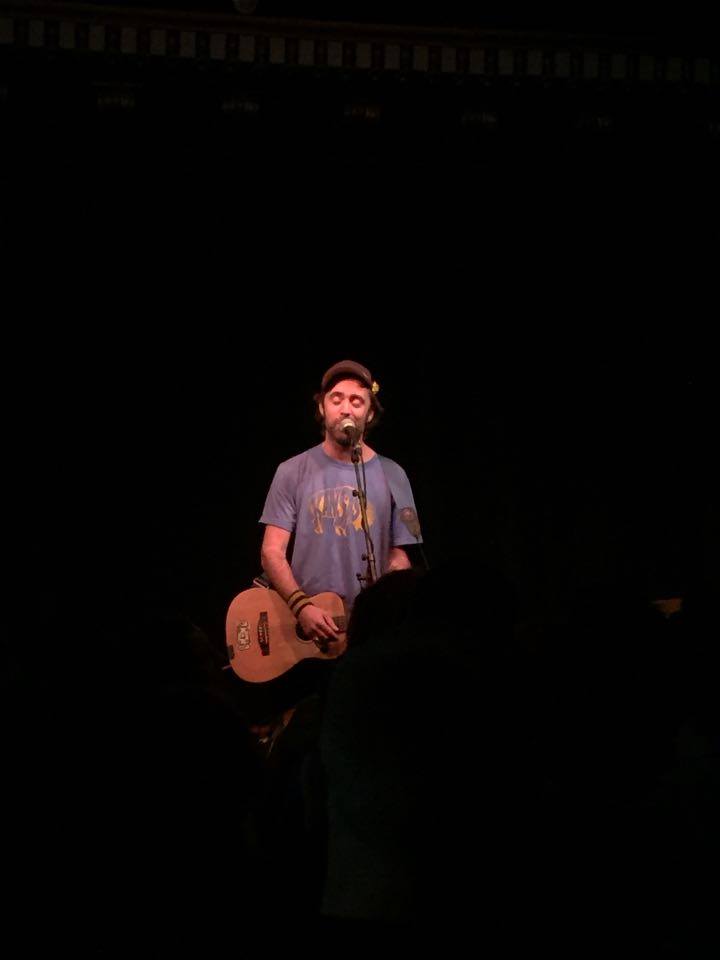 The Essex singer-songwriter Jay McAllister, who uses the moniker Beans on Toast as his stage name, barrelled through varying protest songs in his typical folk punk style that seemed to me to  become just a bit monotonous from the moment he stepped on stage. This was clearly not going to be my kind of music.

I found it difficult to endure Beans on Toast live after the first couple of songs. His gratingly raspy voice suits his satirical lyricism that isn’t shy of delving into forthright social commentary. Beans will deal with all things that mostly includes the Tories being in power, but also racism, fascism, unfair agricultural practices; you name it he’s on it.

He also told several anecdotes from his tour travels from previous years. There was a story told about the song ‘MDMAmazing’ that involves a music festival hook-up, but the punk folk singer himself even questioned if it was a real story or not.

His song ‘Can’t Get A Gig At Glastonbury’, where he bemoans about the struggle of now performing at the festival he used to open so often, shows a little arrogance in a man who is not getting a slot for understandable reasons in my view. Beans at least interacted with the audience for the full duration – joking and toying with them at any given opportunity.

The crowd were not as unruly as expected at a Beans on Toast gig. The singer did not perform in the middle of the venue as he normally does, and it was all unexpectedly tranquil. More people turned up for the support act Mike and Katy West known as Truckstop Honeymoon, who also joined Beans on Toast on stage for a couple of new numbers recorded in their home town back in the US.

All mentions of recreational drug use, while covering various topics of social commentary, were greeted with large cheers from the audience – who were clearly revelling in Beans’ political incorrectness.

He delivered passionate entertainment to the paying Friday night crowd, and half of them certainly got a buzz from it. But the other half sporadically departed – one audience member even telling the man behind Beans on Toast that he was leaving half way through the show, after clearly stating his views on the gig.

You don’t normally see people leaving concerts in pairs slowly throughout a gig until the venue is half-full, and often with a handful songs still left to be played, for no good reason.

There are  normally thrilling responses from protest songs, when they cover such a wide range of topics that are of social acceptance.

However, a Beans on Toast gig is just socialism with a bit of whimsy, which is tough to appreciate unless you are one of his die hard fans.