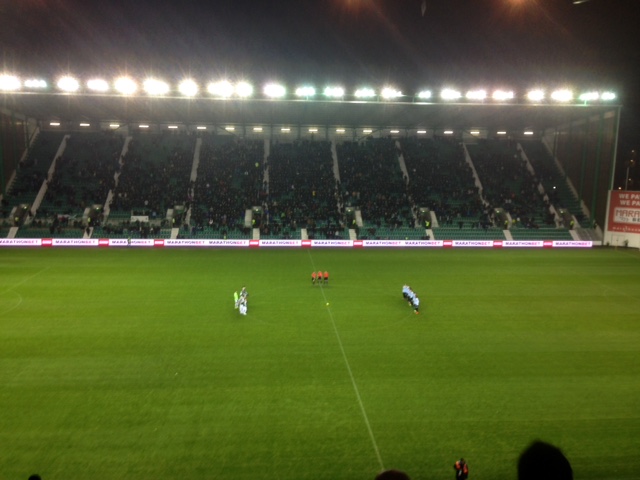 Hibs moved to within two points of league leaders Rangers with a comfortable victory over Livingston tonight thanks to two second half goals from in form striker James Keatings.

Head Coach Alan Stubbs made two changes to the starting XI that beat St Mirren last weekend with Liam Fontaine replacing Paul Hanlon in the centre of the defence and Martin Boyle taking over from Dominique Malonga who is on international duty.

Midfielder Dylan McGeouch returned from injury to take his place on the bench.

7301 fans braved the dreadful weather conditions to watch a Hibs’ team who looked to consolidate their second place in the Championship.

An impeccably observed minute’s silence was held before kick off in memory of those who died in the Paris and Beirut terrorist attacks.

Hibs started brightly and should have taken the lead in the 13th minute. A long ball from Mark Oxley deceived the Livingston defenders and fell to Jason Cummings who calmly rounded the keeper but his left foot strike hit the side netting.

Three minutes later Hibs had a penalty claim denied when John McGinn was impeded inside the area but referee Craig Thomson ignored the pleas from the players and fans.

Hibs dominated the possession but the Lions looked dangerous on the break and Ross Millen went close before Marc McCallum produced a fine save to deny Liam Henderson just before the break.

Livingston started the second half in style and could have scored three times in the opening five minutes. Oxley did well to save from Scott Pittman then Darren McGregor cleared the ball off the line before the Hibs keeper’s legs stopped Myles Hippolyte opening the scoring.

The fans showed their frustration but that turned to relief a minute later. McGinn took possession of the ball in the penalty area and showed some great skill beating three defenders before sliding the ball to Keatings who hammered it home from eight yards, leaving McCallum stranded.

After the goal, McGeouch replaced Martin Boyle and Hibs almost doubled their lead when David Gray’s goal-bound shot was deflected past the post.

In the 55th minute, referee Craig Thomson incurred the wrath of the Hibs’ supporters when he missed Hugo Faria lashing out at Henderson.

Six minutes later, McCallum parried a Keatings strike into the path of Cummings but the youngsters effort was deflected for a corner. McGinn then showed some more of his skills beating Jackson Longridge before sending a superb cross which Cummings headed just wide.

McCallum then produced a sensational save from McGinn as Hibs looked to wrap things up and the second goal eventually arrived in the 68th minute. Again McGinn was the provider and his pass found Keatings on the edge of the area. The striker did well to hold off the challenge of two defenders before firing the ball into the net from 18 yards.

With nine minutes remaining Keatings almost grabbed his second hat trick in two games with a spectacular overhead kick from a Gray cross but the ball flew inches wide.

Jordyn Sheerin scored a consolation goal in the 86th minute leaving the fans with a nervous last few minutes but Hibs held on to secure a valuable three points.