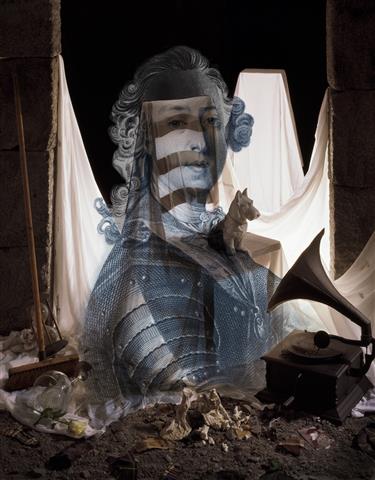 The 300th anniversary of the 1715 Jacobite Rising will be marked by two fascinating new displays at the Scottish National Portrait Gallery this winter. A key player in the rising, John Erskine, 6th Earl of Mar, will be the focus of Rise and Fall, while Calum Colvin, one of Scotland’s leading contemporary artists, will explore the visual imagery and legacy of the Jacobite Risings of 1715 and 1745 in Jacobites by Name.

Responsible for initiating and subsequently ending the Rising, the Earl of Mar (1675–1732) was an extraordinary individual, passionate about both politics and the arts. Born in Alloa, Clackmannanshire, he was a Member of Parliament and later Secretary of State for Scotland, before being deprived of office by the new Hanoverian king, George I, in 1714. Mar raised the standard of rebellion against the Hanoverians, and from September to December 1715 he was effectively ruling Scotland.

The 1715 Rising is a key date in the power struggle between the Protestant Hanoverians and of the exiled Stuarts. It was a major attempt by the Jacobites – the supporters of King James VII (of Scotland) and II (of England) and his heirs – to regain the throne for the Stuart claimant, James Francis Edward Stuart. However victory eluded Mar and he ultimately fled to France with James Stuart in 1716, where he remained until his death in 1732.

At the centre of Rise and Fall will be two large and impressive portraits of the Earl and his wife, Frances Pierrepont (of around 1714), by Sir Godfrey Kneller, the leading portrait painter in England of the time. These imposing paintings usually hang at the National Trust for Scotland property Alloa Tower – the ancestral home of the Earls of Mar and Kellie – and were commissioned by Mar himself. Although he is often defined by his political and military career, Mar was a man of fine taste and an enthusiastic patron of the arts, with a talent for amateur architecture and garden design.

Prints, drawings and miniatures also on show in Rise and Fall bring alive this cataclysmic episode of Scottish history and shed light on the life and interests of the Earl of Mar. Key loans have come from the collection of the current Earl and Mar of Kellie and the National Records of Scotland. The Scottish National Portrait Gallery’s outstanding Jacobite collection has been used to inspire a contemporary intervention which complements Rise and Fall by the renowned Scottish artist Calum Colvin. His Jacobites by Name inventively combines photography with painting and installation. The result includes new works such as Lochaber no More (2015) which links two images of Charles Edward Stuart, commonly known as Bonnie Prince Charlie, the second Jacobite pretender to the throne and instigator of the failed 1745 Jacobite Rising. The first of the images shows Charles as a young man and the other much older.

To make his photographic works, Colvin constructs a set in his studio, using furniture and ornaments, and then paints images on to these three-dimensional objects. When seen through the lens of his camera, a two-dimensional image is formed, a blend of reality and illusion. Lochaber no More is a powerful evocation of the passage of time and the melancholy of lost Jacobite hope, while fragments of burned tartan hint at the tragic outcome of the last rising.

In his work, Colvin also alludes to the tradition of secret symbolism and optical illusionism in Jacobite-related art; because support for the exiled Stuarts was dangerous and could lead to accusations of disloyalty to the Crown, ‘secret’ portraits of the Pretenders were to be discovered on folded fans, sewn discreetly onto articles of clothing, or concealed inside the lid of a closed box.

Colvin was born in Glasgow and studied art in Dundee and London, before coming to prominence in the mid-1980s. He has exhibited extensively in Europe and the United States and has worked on commissions for the National Galleries of Scotland.

Christopher Baker, Director of the Scottish National Portrait Gallery said: “The Jacobite struggle remains potent and romantic 300 years after the key events that defined it. These complementary displays connect powerful portraiture of the 18th century with contemporary responses, and remind us in an engaging and inspiring way of a turbulent period in Scottish history. We are especially grateful to the National Trust for Scotland, the Earl of Mar and Kellie and the artist Calum Colvin for their generosity and commitment to the project.”

Calum Colvin commented “This new body of work investigates the traces of Jacobite material culture, portraiture and visual illusion to be found in Scottish museums up and down the country. I wanted to take a fresh look at this material with a view to re-interpret the matrix of symbols and allusions that they carry and, through a range of different types of contemporary making, bring them into the digital age. The works are contrasted with the existing collection in the Scottish National Portrait Gallery and question the role of this familiar iconography in Scottish national culture.”

The exhibition has been made possible with support from the National Trust for Scotland.
Supported by the Leverhulme Trust.

RISE AND FALL: THE EARL OF MAR AND THE 1715 JACOBITE RISING
CALUM COLVIN: JACOBITES BY NAME