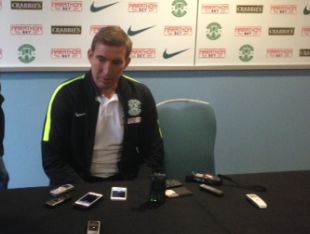 Hibs’ Head Coach Alan Stubbs has admitted that his team were not at their best last night despite taking three valuable points at home to Livingston.

The fans had to endure a nervy last few minutes after the Lions pulled a late goal back, but the players held on to secure the win which moves Hibs to within two points of league leaders Rangers although the Ibrox side have a game in hand.

Speaking immediately after the game to Cliff Pike of Hibernian TV, he said: “It’s fair to say that we weren’t at our fluent best tonight but we still created a lot of opportunities. When you look at the score line you think it was a close game but I think we had enough opportunities for it to have been more comfortable than it was

“I think you have to give Livingston a bit of credit as well. They had a game plan to try and get bodies behind the ball and frustrate us and hit us on the counter.

“I’m pleased that we have won a game of football that we didn’t necessarily play at our best.

“Keats (James Keatings) has scored a couple tonight and he is in great form. His second one gave us a little bit of breathing space but the one negative for me tonight is that we conceded a really sloppy goal.

“Our game management needs to be better. We gave the ball away needlessly and probably just switched off when we defended. We should have come out in a line, but we are talking one little lapse.

“They deserve a break from me having a pop because we have conceded a goal.”