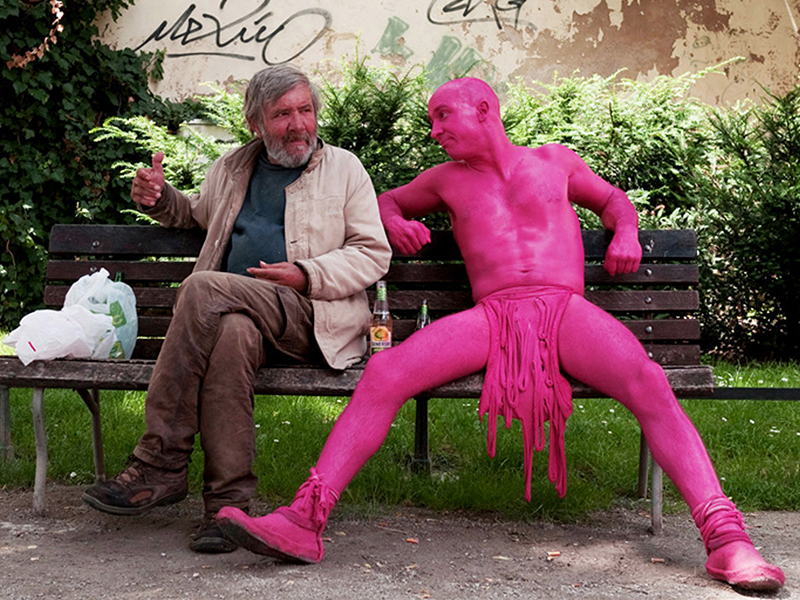 The stranger is often a revealer of truth; his arrival casts a stone into the water, shakes us out of our complacency. But who is the stranger? What separates him from us – what makes him ‘strange’? The theme of the 2015 Scottish International Storytelling Festival is Stories without Borders; it will celebrate not separation and difference but connections – the things that unite us across the world – and this year, with the festival’s special focus on the Middle East and North Africa, this has turned out to be especially – and unexpectedly – topical.

‘You have to read the runes’

When festival director Donald Smith wants to organise something, it’s not governments he turns to. Instead he throws the theme of each year’s festival programme out across the world, to a network of storytellers; those storytellers know other storytellers, and gradually, a festival is born. Even Donald admits, though, that no-one foresaw quite how relevant the 2015 theme would become; from Jordan to Morocco, Iran, Iraq and Syria, many of the countries involved in this year’s festival have come to international attention lately, and not for the best of reasons.  All the more important then to admire the participants who have made the journey to Edinburgh, to extend the Scottish traditions of hospitality and welcome, and to share with them the challenges of an increasingly divided world.

When the festival started in 1988, the organisers were so unsure of an audience that they held it all in a small gallery in the old Netherbow Theatre. Storytelling was seen as a bit weird, and very much the domain of rural communities, travellers, islanders – the only other people interested in it worked in research institutes. Fast forward 27 years and the genre has not only become more popular, it’s uber-cool, and as likely to pop up in Hoxton or Hackney as Skye or Sutherland. Stories are still told in the traditional way – but they’re also shared in films, in pictures (the theme of this month’s Big Draw is storytelling through drawing), in dance, theatre and music, on websites, on Twitter, in blogs and on vlogs. Conflict between countries is one thing, conflict within families another; this year’s festival looks at both. In Iran vs Israel Dutch Iranian Sahand Sahebdivani and Israeli Raphael Rodan combine classic Jewish and Iranian tales with their own personal stories to find out if they really are as different as they’ve been led to believe, whilst The Ties That Bind strand uses workshops and networking events to look at the role storytelling can play in promoting understanding between people of different faiths, nationalities and abilities, helping them to find common ground.

It’s not all serious stuff either – children can hear mythological stories from around the world, have ‘a jam piece with stories about world peace’ from Ailie Finlay and Fiona McDonald, travel back to the Jacobite Uprising with storytellers from Macastory – or join them on a fun cruise on the Union Canal aboard the Lochrin Belle. At Gorgie Farm, Rosie Mapplebeck will reveal just where those Five Little Ducks went swimming to, and at the National Library Mrs Mash will tell all about a sausage-making princess.

From The Bible to Beatrix Potter, green places have always had a special place in storytelling; the festival’s Experiencing Gardens series, held at the Botanics in Inverleith, explores such topics as why there are always gardens in Paradise, what garden imagery and symbols mean, and how gardens work as imagined worlds. The Botanics is also the place to go for Tree Trails, where you can hear about the lore and legends of our native oak, birch, pine and rowan. And if you’d rather just get down and dirty, Crops In Pots offers you family stories at Leith’s flourishing Community Croft. The festival is also linking up with Dig It 2015, Scotland’s year-long celebration of archaeology. At Cramond you can  find out what excavations have revealed so far; who was there before the Romans – and after them? And why?

The end of October brings its own festival, one that, it must be said, many people dread. In some city streets Hallowe’en can feel like a siege; you either have to hide from it or be prepared to dish out large amounts of chocolate in return for what cannot under any circumstances pass for ‘entertainment’. The Storytelling Festival aims to change all that and bring back traditional guising; on the afternoon of 31st October you can learn songs, poems and dances then follow the Old Town Guisers Trail (or your own), and in the evening everyone over 10 is invited to celebrate the Celtic new year at the Samhuinn Fire Festival – a stunning torch lit procession through the Old Town, hosted by the Beltane Fire Society, on the day when;

Mumming is a Scottish tradition; there are over 200 versions of the Galsoshans play, traditionally performed in Greenock on Hallowe’en. Storytelling Centre trainee Morag Wells has written a special short version of the play for performance in schools and local communities; Inverclyde is even holding its own Galoshans Festival. All very well, you may be saying, but how about traditional storytelling round the fire? Panic not (as that Roman Raconteur Lurcio, aka Frankie Howard, might have said…) – on every evening of the festival, ‘as the darkness closes in and the embers glow with pictures’, Open Hearth will feature stories and music from around the world. Meanwhile at Open Table (2.30pm Monday to Friday), you can share food and stories across cultures, faiths and traditions.

So what of that stranger, the one waiting at the door? Martin Palmer, Katriana Hazell and Sylvia Woodcock-Clarke’s acclaimed anthology Stories of the Stranger, was published last year. They assembled a selection of brilliant writers, young and old, to retell some of the world’s most culturally defining tales about encounters with strangers. The experience of losing everything, of being thrown out, of being dispossessed, exiled and being forced to rely on the generosity (or not) of others, is a fundamental and recurring theme in many world cultures. Sylvia Woodcock-Clarke’s art will be exhibited at the Storytelling Centre from 17th October. In the festival’s keynote talk, Martin Palmer will share the journey he has taken in pursuit of a holistic, creative diversity across faiths and cultures; his story without borders can now be ours.

The Scottish International Storytelling Festival takes place 23rd October-1st November 2015. Pick up a paper programme from venues across Edinburgh, or visit the Storytelling Centre’s website here for full listings and booking information. Some events are free. The festival is supported by the Scottish Government, Creative Scotland, City of Edinburgh Council and Festivals Edinburgh; it was launched at Empires Cafe, a traditional Turkish tea house and bistro at 24 St Mary Street. 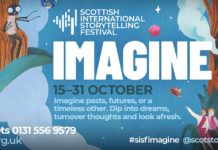