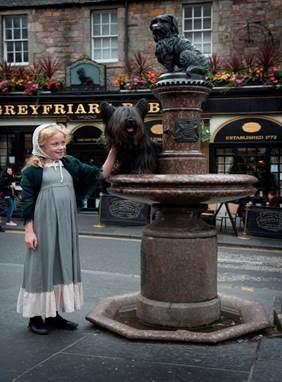 With the release of the new James Bond film this week we are reminded that Scotland plays a main role in many films including the previous Bond blockbuster, Skyfall.

From Edinburgh’s most famous Skye Terrier, brought to life in Disney’s Greyfriars Bobby, to Rosslyn Chapel, which has pride of place in the international thriller The Da Vinci Code, film sets in Edinburgh and the Lothians famous star in a new guide produced by VisitScotland.

Available in both print and digital format, Set in Scotland, A Film Fan’s Odyssey contains details of more than 100 films shot in the country over the decades and is aimed at visitors eager to follow in the footsteps of the film stars.

Over the years, Edinburgh and the Lothians has played host to acting and film-making royalty such as Dame Maggie Smith, whose portrayal of Muriel Sparks’ iconic heroine in The Prime of Miss Jean Brodie won her an Oscar and acclaimed British director Danny Boyle, who made his debut with Edinburgh-set Shallow Grave. More recently, Tantallon Castle in North Berwick was used as a location visited by Scarlett Johansson’s other-worldly seductress in Under the Skin.

Set in Scotland: A Film Fan’s Odyssey, which will be available free of charge in VisitScotland Information Centres throughout the country, in branches of Waterstones and for download at visitscotland.com, capitalises on the growing trend of set-jetting. It is the first Scotland-wide film locations guide VisitScotland has produced.

There are special sections on James Bond – the spy who attended Fettes and was portrayed by Edinburgh-born Sean Connery – and Bollywood, as well as honorary mentions for popular television series such as Outlander, Downton Abbey and Balamory.

Set in Scotland, A Film Fan’s Odyssey includes details about Edinburgh and the Lothians’ starring roles in a host of movies, including:

One of Edinburgh’s most famous stories, Greyfriars Bobby, was brought to the silver screen by Disney in 1961. It tells the legend of the Skye Terrier named Bobby who sat by his master’s grave for some 14 years in the 19th Century.

Although most of the filming was done in the studio, the film features a wonderful shot from Calton Hill and a statue of Bobby, on the corner of Candlemaker Row and George IV Bridge, is a popular attraction among the millions of visitors to Edinburgh.

Cabinet Secretary for Culture, Europe and External Affairs, Fiona Hyslop, said: “Scotland’s towns, cities and countryside play their own show-stealing parts in the stories being told here for production firms across the world. VisitScotland’s new film locations guide details more than 100 films shot in Scotland over the last decades and provides an opportunity for us to showcase not only Scotland’s internationally renowned heritage but also the wealth of natural beauty that our country has to offer.”

“Edinburgh and the Lothians’ breathtaking beauty  has been inspiring film-makers for decades, with the region playing host to a number of big-budget Hollywood movies. This new guide is a must for any set-jetting film fan who wants to retrace the steps of their Hollywood heroes or explore the real life locations that they once admired on the screen. It is not an exhaustive list but gives a flavour of the numerous films shot in Scotland. We look forward to welcoming movie enthustiasts from across the world to Edinburgh and the Lothians as a result.”

Featuring everything from The 39 Steps, the 1935 Alfred Hitchcock film which includes the iconic Forth Bridge, through Chariots of Fire and Gregory’s Girl to the Harry Potter films and Prometheus, right up to 2015 movies Macbeth and Sunset Song, which were partially shot in Skye and Aberdeenshire respectively, Set in Scotland details more than 100 films shot in Scotland.

It also details some of the more surprising places that Scotland has stood in for on the silver screen, including Turkey (From Russia With Love), San Francisco (Cloud Atlas), Vermont (Flash Gordon) and even the surface of Jupiter (2001: A Space Odyssey).

Specialist research and consultation was provided by David Martin-Jones, Professor of Film Studies at the University of Glasgow, including dedicated input with regard to Gaelic filmmaking, Bollywood location shoots and filming in Orkney and Shetland.

To download a copy of the guide, go to www.visitscotland.com/about/arts-culture/films/locations