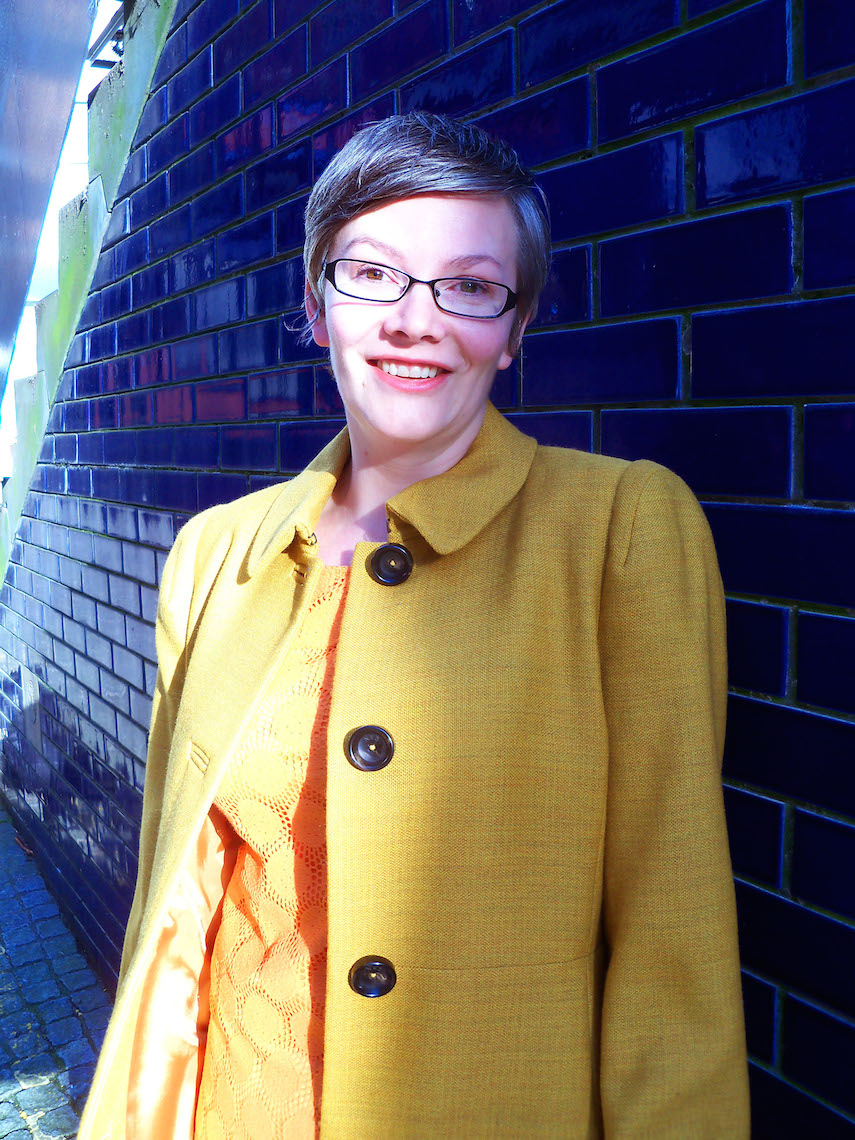 When Jane Alexander was a little girl, the highlight of her country holidays was the annual treasure hunt; she loved it so much she even asked her Dad to set one up back in their Aberdeen garden – in a blizzard. Jane still likes treasure hunts now (although these days she calls them geocaching), so when she wanted to write a story that looked at success and failure, collaboration and competition – the many aspects of long-standing friendships – she realised that her childhood obsession was the perfect vehicle. At the Central Library earlier this month, Jane spoke about her new novel The Last Treasure Hunt, ‘a modern media morality tale’. As a child Campbell Johnstone spends summers in Glenelg on the Kyle of Lochalsh with his brother, his cousins – and Eve, daughter of Jasmine, and Campbell’s biggest fan. The feeling is not reciprocated;

‘From the time we used to play together as children, Eve was a wee dog yapping round my heels.’

When Jasmine organises the annual treasure hunt, Campbell wants to win at all costs – even if that means accepting Eve’s help to cheat then taking all the credit;

Twenty years later, Campbell is thirty, working behind a Glaswegian bar and sharing a flat with his research student cousin Roddy. When Roddy decides to take up a fellowship in the US, Campbell starts to realise that just about everyone he knows seems to have made more of their lives than he has, and when he finds out by chance that little Eve has become a film star, he can’t resist a touch of internet stalking. Nothing wrong with that – we all do it, don’t we? But then Eve turns up in Glasgow and Campbell decides to take it just a little bit further. What happens next – and more importantly how Campbell deals with it – allows Jane to explore issues of celebrity, truth, self-delusion and social media whilst telling the fast-paced, gripping story of an inadequate man who still wants a prize. Ultimately, she asks, what does winning mean?

When people asked Jane what her new work-in-progress was about, she wanted to say ‘failure’; she quickly learned what a conversation-stopper that one was, so she told them it was about ‘success’ – but it’s failure that interests her more. Children are constantly told they are ‘special’ and can achieve anything; they can’t, and as adults we can’t all win. How we deal with this in, an age when social media allow – even encourage – us to present curated shop-window versions of our lives, is a subject that fascinates Jane. Can we ever stop comparing ourselves unfavourably to others? Personally I don’t even read my college’s year book; everyone (or at least, everyone who gets a mention..) seems to be rich/famous/powerful, and although I have no wish to be in the hot seat of some mega-corporation, I still can’t help wishing I’d been asked. So although you may be shocked at what happens – or what Campbell allows to happen – in The Last Treasure Hunt, you’ll also wonder what choices you might have made.

Jane started her career as an artist; one of her worries when she started writing was whether her work was ‘clever’ enough. A University of Glasgow Creative Writing course helped her shake this off, but it still took a while for her to feel comfortable with her own ‘voice’. She wanted her the story to be vivid and immediate, her characters to sound like Scots; it is important to her that The Last Treasure Hunt can be read as a straightforward story – it’s up to the reader to see, or to ignore, what’s going on beneath the surface. There isn’t, Jane says, so much Scottish literary fiction around – her own favourites include Iain Banks, though she also a fan of the Canadian writer Emily St John Mandel and says that her next book is edging into near future, speculative fiction. The Last Treasure Hunt moves between Glasgow, London, Perthshire and the Highlands, and one of Jane’s many skills is the ability to convey a sense of place in few words. Campbell wanders around Brick Lane;

‘the bleak and tangled concrete of the Old Street junction…passing alley-mouths, locked doors, shuttered windows that might still have been hiding…old haunts.’

At an after-party girls are ‘packaged like sweeties, bright and shiny’. In a charity call centre we see;

‘…the crowd of twenty-somethings. All their scrolling and sorting and sharing. Their selecting and responding – it was like tending a fire. Feeding it, building it, keeping it alive…’

In many debut novels it is frustratingly hard to tell one person from another, but Jane knows how to keep her writing sharp – from Campbell’s long-suffering friend, the steadfast, slightly cynical Eilidh to Chris, the scarily determined journalist, every character is well-rounded and real. A childhood scene with Duncs, Campbell’s older brother, is a wonderful example of adolescent attitude and angst;

‘All that smirking every time Mum opens her mouth and rolling  his eyes and ignoring what she says…he rolls his eyes at me too, like, You wouldn’t understand…but I’ve seen Mum and Dad giving each other secret looks like they’re laughing too, at him, and that’s even more annoying…if they’re laughing at him, they could be laughing at me, too.’ She may always have been brilliant at character and setting, but Jane found plotting difficult; writing good sentences was one thing, but making readers want to turn the page was something else. She’d written several unpublished novels before The Last Treasure Hunt; they were, she acknowledges, unsuccessful because ‘I couldn’t craft a story’. The cure came in the form of screenwriting; some writers fear a screenwriting course will make their work formulaic, but Jane thinks that’s rubbish – it gave her the tools she needed and she recommends it highly to would-be authors. Any other advice for those still  languishing in the slush pile? ‘Read, read, read; keep going; accept constructive criticism.’ Now a teacher of creative writing (at the Open University) herself, Jane finds that the successful students are usually the ones who are prepared to learn. ‘Writing groups, or even ‘trusted readers’ are very valuable’.

Is Campbell lacking in self-awareness because he’s a man? No, says Jane, it’s just him; there’s a huge gap between what he sees and what other characters see. Some readers have loathed Campbell, some identify with him, and Jane freely admits that there’s a little bit of her own character in there somewhere., ‘We all have the capacity to act in a selfish way’.

Jane enjoys geocaching because ‘it encourages you to explore places you might not have noticed before’; in The Last Treasure Hunt, this accomplished writer encourages us to explore parts of society, and of ourselves, that we might try not to notice, but ultimately cannot ignore.

The Last Treasure Hunt by Jane Alexander is published by Saraband. This talk was part of Edinburgh Libraries’ new series on debut writers: #edinburghreads.

Get access to ebooks with Libby from Edinburgh Libraries